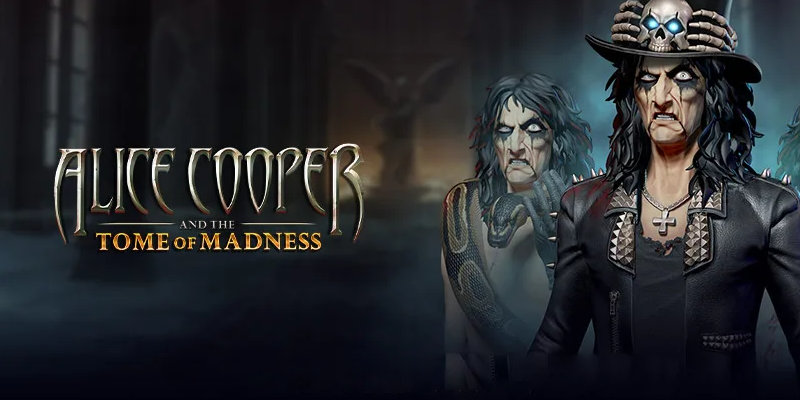 Rock legend Alice Cooper immortalised in his own horror-themed slot

There have been a number of strange new online slots to arrive at slot sites over the last few years (most of which can be found in the WTF themed slots section of our site), but not many have caused us to raise our eyebrows quite like Alice Cooper and the Tome of Madness has.

Normally you'd expect an online slot based on an international rock star to be more of a music-themed slot, featuring imagery related to their songs, albums and music videos... However, Alice Cooper and the Tome of Madness is more of a horror-themed slot, quite like Ozzy Osbourne Video Slot.

This 5-reel, 5 row cascading slot boasts a number of engaging bonus features and mechanics including four Reality Effects modifiers (Insane Asylum, The Dungeon, Chamber of Horrors and Temptation Room), these can trigger randomly after any winless spin and force a potentially lucrative winning combination. In addition to these, this slot features Alice Cooper Mega Wilds, Reality Spins and Hats of Madness feature.

Is Alice Cooper and the Tome of Madness worth a spin?

We'd be lying if we told you that any of us here at Slot Gods are real fans of Alice Cooper, but that might well change considering this awesome slot is on its way to slot sites.

We'll be honest, the maximum win potential is a little bit disappointing, sitting at just 3,000x the player's maximum stake, but it doesn't mean this game is any less enjoyable to play thanks to the incredible number of bonus features and mechanics. Ultimately though, if you're looking for a rock and roll inspired slot with big wins you're better off playing ZZ Top Roadside Riches.

Play Alice Cooper and the Tome of Madness

Alice Cooper and the Tome of Madness hasn't been released yet, but we expect it to become available at the following online slot sites on 7th October.

These slots sites have been thoroughly audited and vetted by us to ensure they offer an exceptional user experience, are trustworthy, safe, secure, and have the best selection of online slots including other games by Play'n GO...