Rich Wilde and the Tome of Madness

Rich Wilde and the Tome of Madness is the first game in the Rich Wilde series that ditches standard paylines in exchange for a cluster pays format that's devilishly fun. Beware though this creepy H.P. Lovecraft inspired slot isn't for the faint of heart.

Rich Wilde and the Tome of Madness Screenshots

Rich Wilde and the Tome of Madness Features

We’ll be honest, Rich Wilde and the Tome of Madness is a little bit confusing at first glance. First and foremost you should understand that this isn’t a slot with traditional reels, instead wins are registered when a 4 or more matching symbols touch on the grid upon falling into place.

There are two major features in this game that will require some reading up on before you play (as they’re quite intricate) these are as follows:

Every time you register a winning cluster of symbols during the base game you’ll add power to a portal charge meter which is in the top left corner of the game screen. Depending on how much of the portal you charge in one round you’ll trigger different features.

Other World free round

If 42 symbols are removed from the grid, charging the portal fully, you’ll unlock the Other World free round. Here you’ll get one free round with 3 random Portal effects in play. If the Portal is over-charged then an extra Portal Effect is added for every 3 extra winning symbols collected.

In total there’s up to 7 Portal Effects that are triggered when no more wins can be achieved, these are as follows:

During the Other World free round, you’ll notice that there are 11 or 12 eye marks visible on the grid. If you form any winning clusters in an eye’s location, that eye will open. If you open all of the eyes, the Mega Wild Cthulhu symbol will be released!

This will be added to the grid and move down the grid with each and every cascade, helping create significantly more winning combinations before disappearing. 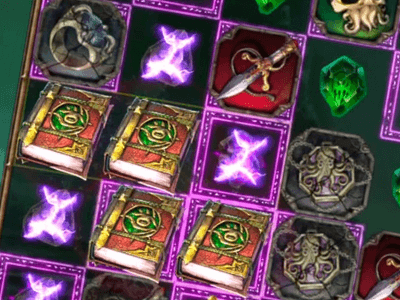 Each time players register a win, a portal is charged, once the charge meter reaches a certain point, players will unlock a different feature, each better than the next. 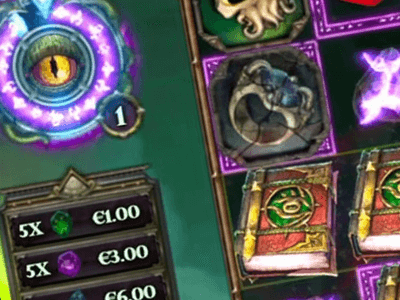 If players register a win that sees 42 symbols removed they'll unlock the Other World free round, which is essentially a single free spin with three random portal effects in play.

Rich Wilde and the Tome of Madness Review

Join Rich Wilde in his hunt for a mysterious artefact in what could be described as one of the creepiest online slot games of all time. This 5 x 5 Cluster Pays masterpiece is a true departure from what you might be used to, but it’s well worth playing!

Rich Wilde and the Tome of Madness is a complete departure from what you’ll be used to if you’re a fan of the series. Before this game was released Wilde had ventured to the jungles of Mexico, the mountains of India and the pyramids of Egypt.

In the Tome of Madness our hero, Rich Wilde is transported to a mysterious new realm inspired by H.P. Lovecraft’s famous story The Call of Cthulu. This slot is dark, ominous and straight-up scary, but don’t let that stop you from playing this gorgeously designed gothic slot.

The game opens with the voice of a man reading an H.P. Lovecraft quote, he returns throughout the duration of your gameplay whenever a large win is registered which is pretty eerie if we're being honest!

In terms of the symbols, there are 4 different types of stone, each varying in colour and skulls, rings, daggers and an octopus pendant.

We can’t praise Play’n GO enough for the changes they’ve made in this iteration of the Rich Wilde series. Excuse the pun, but they’ve brought an entirely new dimension to the series.

Played on a 5 x 5 grid Rich Wilde and the Tome of Madness is nothing like your ordinary online slot game. Rather than utilise reels and paylines, wins are registered when a cluster of symbols appear next to each other (known as cluster pays).  When a winning cluster is registered they're removed from the game and replaced with new ones.

There’s a lot more to take in and it probably will take a while for things to fall into place and for you to fully understand what does what and how each mechanic works.

With an RTP of 96.59%, extremely high volatility and a maximum win of 2,000x your initial bet we were suitably impressed with Rich Wilde and the Tome of Madness. This feature-rich game goes a long way in making you feel as if you’re making millions thanks to the cluster pays mechanic leading the multiple successive wins.

Rich Wilde and the Tome of Madness is truly fantastic. This gargantuan gothic masterpiece might look absolutely terrifying when you first start playing, but once you’ve got to grips with the basic premise of the features and mechanics we genuinely believe you’ll fall in love, especially if you manage to unlock the highly lucrative bonuses.

Play Rich Wilde and the Tome of Madness