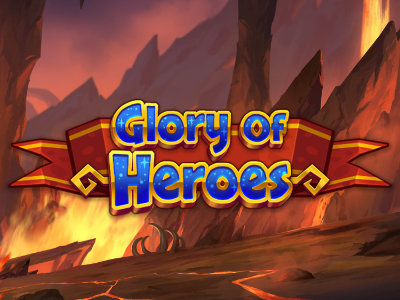 Who says that you can't journey through a medieval kingdom and gain cash prizes whilst you do so. Amazingly, in Glory of Heroes, you play as a dashing knight who must battle through monsters and obtain treasure through Cluster Pays.

Developed by Dreamtech Studios in partnership with Yggdrasil, Glory of Heroes plays on a grid of 7x7 and you match up symbols in order to progress to the next level. Along your journey, you'll gain modifiers to help you defeat the boss and gain free spins.

“ A glorious slot that's a heroic love-letter to RPGs ”

Jump straight into the action and play Glory of Heroes now at the following fully licenced UK slot sites. These slot sites have been thoroughly audited and reviewed by the team here at Slot Gods to ensure they offer an exceptional user experience, are trustworthy, safe, secure, and boast the best selection of online slots in their portfolio including Glory of Heroes...

It all starts with the Cluster Pays mechanic which matches up 5 symbols to make up a winning cluster.

When you open up the slot, you'll find that there are 3 locations with multiple levels to them. The first and second locations have 3 levels with the third location only having 2 levels.

You have targets on the reels which you are supposed to hit, and that's how you move levels to progress. Once you finish the final bit of location 3, you'll be reset back to the start.

When you clear a location, you'll be given 1 spin on the Boss Bonus Wheel which can lead to instant cash prizes.

When you fail to land a winning combination, there's a chance to land a Hero symbol which can be 2x2, 3x3 or 4x4 in size. Only 1 symbol per level can be added as a Hero symbol and each level cleared upgraded the symbol.

The protagonist has 3 different powers which include Magic, Counter and Fury. The Magic feature adds more wilds, whilst the Counter chooses a target on the reels to defeat. The Fury feature removes a number of symbols. These powers are modifiers and can appear randomly.

There's a meter to the left of the reels with 50 positions on this and each winning symbol removed increases the meter by one. If the meter reaches 50 or more, then free spins will be triggered. Between 8 to 50 free spins can be awarded a win multiplier that starts at x1 and increases with each cascade. 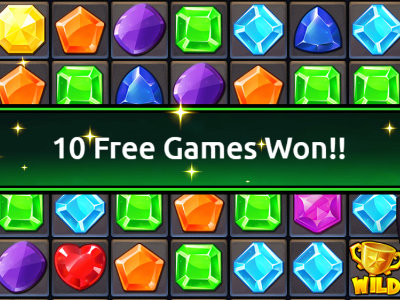 To trigger this feature, you need to fill up 50 positions on the meter to the left by landing wins. You can land up to 50 spins with a win multiplier that starts at x1 and increases. 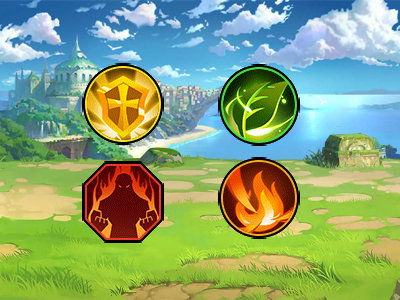 The Hero has powers that can be randomly awarded to you during spins. These include additional wilds, targets defeated and removing a number of symbols for more wins. 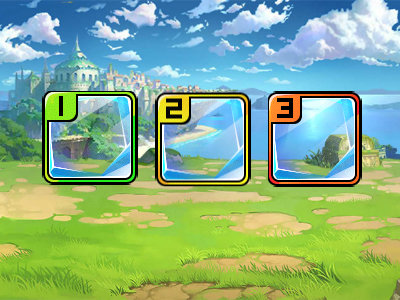 There are 3 different levels but each level has sub-levels. You progress on these levels by defeating the targets on the reels and clearing a location will give you a Boss Bonus Wheel spin.

We were blown away by the visuals and gameplay of Swords and Sabres: Charge Gigablox, so it was only natural that Dreamtech Studios went even bigger for their next online slot. They are collaborating with the giants of Yggdrasil again for Glory of Heroes.

Playing on a grid of 7x7, this gaming slot uses Cluster Pays to match up symbols of 5 and is definitely unlike any other slot you've played. Glory of Heroes embodies traditional RPG (role-playing games) and combines it with an online slot for something truly spectacular.

The imagery of this slot looks to be inspired by traditional RPGs from the 80s such as Final Fantasy or Dragon Quest as you have a hero to the left and a monster to the right. There are a variety of different locations to take you through your journey and they all look stunning. It starts with a cheerful field full of bright colours but you'll soon be transported into the depths of a dungeon filled with scarier looking monsters.

As you progress through the levels, you'll find the hero getting stronger with better armour and weapons which is an amazing attention to detain. It's even more impressive when you see the hero attack the reels and the monsters try to attack him.

In terms of sounds, there's an intense musical score that mixes classic rock with pop to create something that you'd expect to hear in Persona or any other RPG. When you attack, you'll hear battle noises along with typical menu noises when you spin and click. Overall, it's absolutely brilliant and it's almost a masterpiece in design.

Glory of Heroes is unlike any other slot you've probably played - except Street Fighter II. It features a Cluster Pays system that matches up wins but there are modifiers and free spins to be gained through the slot. Whilst it may look complicated with all the different levels, the gameplay remains the same and it's just the visuals that change.

Everything you could ever need is at the bottom of the screen with the bet level, autospin and spin button at the bottom. To the right of the reels, you'll find an additional menu with the paytable and game rules in case you need additional help. At the top right of the screen, there's a little map that tells you exactly how to progress through levels - all you need to do is hit the targets.

The RTP of this slot is 96% which is just at the average standard and it features high volatility gameplay meaning that you can expect less frequent wins but they'll be higher when they do.

As for the maximum win, you can see wins of up to €376,300 - but that's the maximum. It's not a huge amount but it's decent enough and easy to get to with the modifiers and free spins.

What else can we say about this slot apart from the fact that it's absolutely brilliant to play! The design is wonderful and makes you feel like you've been transported into a new world, whilst the gameplay is just good clean fun.

Of course, the win potential isn't earth-shattering, but this is definitely a slot that can be replayed over and over again - which is even better. If you want an original slot that pays tribute to vintage videogames, then try out Glory of Heroes.

Play Glory of Heroes now at the following verified UK slots sites. These slot sites are fully licenced and have been thoroughly vetted and reviewed by us to ensure they offer a great user experience, are trustworthy, secure, and have a wide variety of the best online slots in their lobbies including Glory of Heroes:-

Enjoyed Glory of Heroes? Here's a handful of similar slots we think you'll like too. These online slots have been chosen based on features and themes similar to Glory of Heroes. You might also want to check out other Yggdrasil slots.