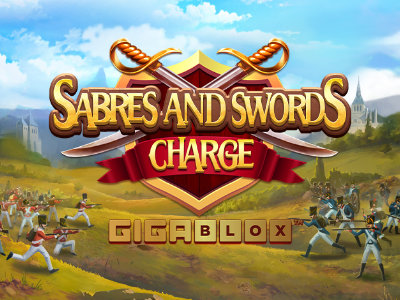 Based around Napoleonic toy soldiers, this action slot plays on a grid of 6x6 with 50 paylines in the middle of the battlefield surrounded by castles and soldiers.

Perhaps the most exciting feature in this slot has to be the Gigablox mechanic created by Yggdrasil. These are oversized symbols that start at 2x2 and can end up being as big as 6x6. Gigablox symbols can land on any spin and basically increase your chances of winning big.

Sword and Sabres: Charge Gigablox also has a free spins feature called Engage the Enemy which is triggered by landing 5 or more scatters. The scatters are calculated by symbol size meaning that a 2x2 block will equal 4 scatters with each scatter adding an additional free spin.

Throughout free spins, you can gain extra bonuses by gathering a select amount of scatters. These include: 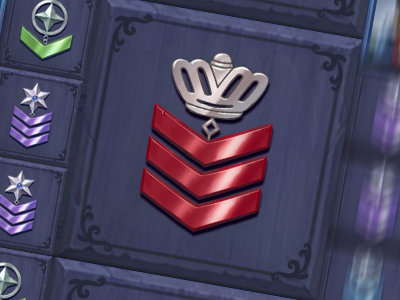 The Gigablox feature includes large symbols ranging from 2x2 to 6x6 in size leading to bigger wins. Throughout free spins, there are multipliers attached to these Gigablox reaching up to x6. 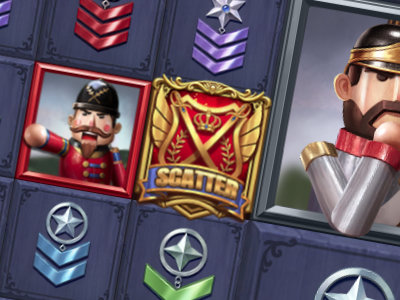 These free spins are triggered by landing 5 scatters and feature a range of bonuses if you gain additional scatters. You can remove certain symbols and gain extra free spins.

Inspired by the Napoleon wars, Swords and Sabres: Charge Gigablox is an action slot centred around toy soldiers on a battlefield with the grid in the middle. Developed by Yggdrasil's Dream Tech Studios, this slot uses the Gigablox mechanic to add more flair to the slot with larger symbols reaching up to 6x6.

Alongside the adorable and clean visuals that look straight out of Toy Story, this slot features an incredible free spins feature called Engage the Enemy which removes lower symbols and gains additional free spins by collecting additional scatters. See if you can remain victorious on the battlefield in Swords and Sabres: Charge Gigablox.

The slot is focused on a baron battlefield with various castles and buildings in the distance which sets this slot around the late 18th century during the Napoleonic wars. During free spins, the screen gets darker and the battlefield is more of a wreck. There are flames surrounding the reels and all the soldiers are not on horses with an angry-looking soldier stood next to the reels drumming.

In terms of the music, there is a stereotypical war score that plays with drums and flutes throughout the base game but this completely changes during free spins. The beat gets more intense and the sounds get more erratic throughout free spins signalling the chaos on screen.

Despite having the Gigablox mechanic, the gameplay is incredibly straightforward and easy to follow. The Gigablox mechanic adds larger symbols which result in better wins! The only other feature is the free spins option which explains everything that happens as you progress through it.

Like most online slots, you can find all the relevant buttons at the bottom of the screen. The spin button is in the middle with the autospin and bet level to either side of it. Further to the right of the screen, you'll notice a drop-down menu with the paytable, game rules and other information you may need.

Swords and Sabres: Charge Gigablox has a solid RTP of 96.11% which is just over the average standard and features a high volatility level. You can expect less frequent returns but they'll be higher they do, so if you like this sort of gameplay then this may be the slot for you.

As far as the maximum win goes, it's depressing low at 2,888x stake which is ridiculous for a high volatility slot. Of course, you can win decent wins by playing with the maximum bet of 75.00 - but you'll never get anything higher than 2,888x your stake which can be achieved through the free spins round with the Gigablox multipliers.

On the surface, this slot is utterly wonderful and charming with a unique theme that hasn't been explored with online slots. The design is fantastic and the gameplay is pretty satisfying with the Gigablox mechanic compared with the free spins.

However, the disappointment comes with the win potential as 2,888x your stake is a low amount for a high volatility slot. You may have decent wins if you bet the maximum bet level, but playing on the low bet levels will not lead to amazing wins.

Despite this, the slot is utterly charming and mesmerising with so many wonderful moments. If you love quirky slots that focus on toy soldiers, then this is definitely a slot to check out as there is no other slot like Swords and Sabres: Charge Gigablox.