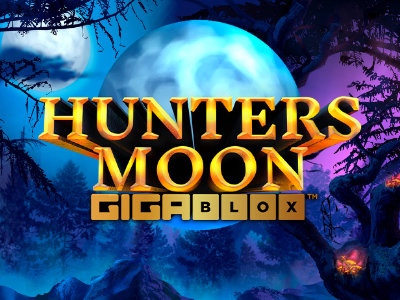 Hunters Moon Gigablox is a 6-reel, 50 payline slot developed by Bulletproof Games and Yggdrasil as part of the YGS Masters Programme. This slot revolves around giant Gigablox symbols that can grow as large as 6x6 and the bonus reel, which sees special bonus symbols and wilds work their way across the top of the game screen from left to right. Players can win a maximum of 5,000x their stake from this Medium/High Volatility slot.

“ Hunters Moon is a pretty solid addition to the Gigablox family ”

Jump straight into the action and play Hunters Moon Gigablox now at the following fully licenced UK slot sites. These slot sites have been thoroughly audited and reviewed by the team here at Slot Gods to ensure they offer an exceptional user experience, are trustworthy, safe, secure, and boast the best selection of online slots in their portfolio including Hunters Moon Gigablox...

Hunters Moon Gigablox, as the name suggests is a Gigablox slot that sees giant symbols as large as 6x6 in size land on the game reels on every single spin.

In addition to large symbols, this game boasts a special Bonus Reel that sees bonus symbols and wild symbols shift across the game screen one spin at a time. Players can pick up the biggest wins by way of the Free Spin Bonus Feature.

Any of the symbols can land on the reels as a block, rather than a single symbol. These blocks can be as large as 6x6. Players are always guaranteed at least one Gigablox symbol on every spin.

At the top of the game screen, there's a special Bonus Reel that moves one place to the left on every spin. Bonus symbols and wild symbols may appear on this special reel at any time, slowly making their way across the six squares.

These special symbols on the Bonus Reel can potentially convert any symbols on the corresponding reels. If a Gigablox reel falls below a wild or bonus symbol then the entire reel has a chance of being converted into a matching symbol.

Only the middle four bonus reel slots are active, the first and sixth reels do not lead to any special symbol conversions.

If five or more bonus symbols land on the main set of reels then a Free Spins bonus will trigger. Players will receive 1 free spin for each bonus symbol on the reels. Free Spins from bonus symbols are awarded by symbol size, for example, a 3x3 block will see players receive 9 free spins in total.

If any additional bonus symbols land on the game reels during the Free Spins bonus then will players will receive +1 extra free spin.

Special symbols such as bonuses and wilds appear more frequently on the Bonus Reel during this feature. 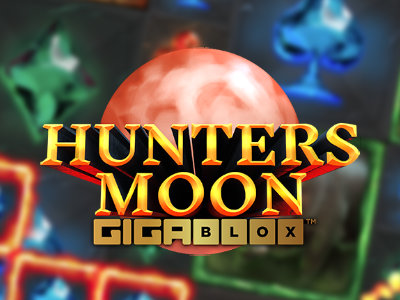 Players are guaranteed to land a special Gigablox symbol on the reels on every single spin. These symbols can be as large as 6x6 in size. 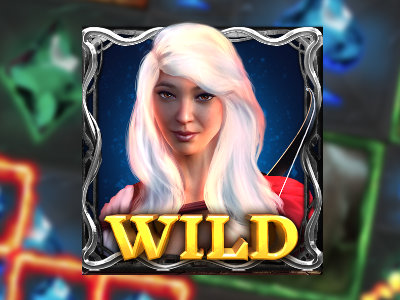 There is a special bonus reel that runs across the top of the game screen that moves one position at a time every single time the reels are spun. Wild and bonus symbols will run along this special reel. 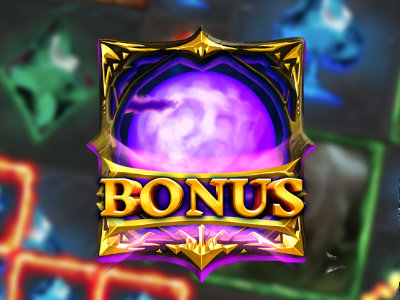 Hunters Moon Gigablox is a 6-reel, 50 payline Gigablox slot developed by Bulletproof Games under the tutelage of Yggdrasil, as part of the YGS Master programme.

This Gigablox slot features an innovative bonus reel that sees special symbols shift across the top of the game screen, converting symbols on the reels directly below. In addition to the bonus reel, players can trigger free spins with additional special symbols in play.

This dark and mysterious slot sees a white-haired female Hunter stand to the left of the silver-clad game reels. If you've watched the Netflix series The Witcher (or played the video game) then you might think that this Hunter looks like a female version of Geralt of Rivia, perhaps Bulletproof have taken some inspiration from the show?

This slot is all about the bonus reel that sits atop the main game reels. This bonus reel sees special symbols work their way across it (from right to left), moving one place at a time after each and every spin of the reels.

In terms of navigating this slot, all three main game buttons (spin, autospin and stake selection) can be found in the bottom right-hand corner of the game screen. Players not in the United Kingdom will be able to use a bonus buy button situated just above the spin button.

This Medium/High volatility slot is pretty run-of-the-mill, players can win up to 5,000x their initial stake and the RTP is 96.00%, nothing spectacular, but enough to entice us to give this action-themed slot a spin.

One thing we really liked about Hunters Moon Gigablox is that there's a page within the game information that displays the return and maximum win potential based on the player's stake at that time. So, whilst we were playing with a 6.00 stake we were able to see that the maximum amount we could win was 23,454.00, and the maximum win we could win using the Bonus Buy feature was 2,345,400.00 (the Bonus Buy is only available for non-UK players).

Hunters Moon Gigablox has some interesting mechanics and we found the free spins feature to be very lucrative. If this is your first ever Gigablox game we'd perhaps recommend playing something a little bit more well-polished such as Hades Gigablox, as this is a little rough around the edges and there are bigger wins to be had elsewhere.

Play Hunters Moon Gigablox now at the following verified UK slots sites. These slot sites are fully licenced and have been thoroughly vetted and reviewed by us to ensure they offer a great user experience, are trustworthy, secure, and have a wide variety of the best online slots in their lobbies including Hunters Moon Gigablox:-