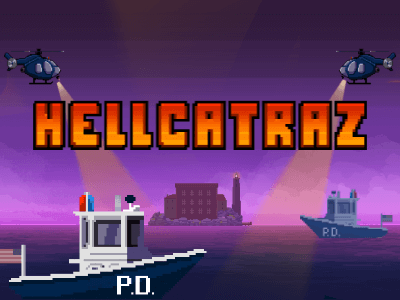 Hellcatraz is a truly unique 6-reel, 46,656 payline slot set on a dangerous island prison that you might just recognise for being similar to the world-famous Alcatraz Federal Penitentiary, found just off the coast of San Francisco! This innovative slot gives off some retro videogame vibes and features some excellent bonus features and mechanics including a Mystery Reveal Feature and Super Free Spins that's triggered when players collect enough cell keys!

Jump straight into the action and play Hellcatraz now at the following fully licenced UK slot sites. These slot sites have been thoroughly audited and reviewed by the team here at Slot Gods to ensure they offer an exceptional user experience, are trustworthy, safe, secure, and boast the best selection of online slots in their portfolio including Hellcatraz...

8-bit slot Hellcatraz features three main bonus features and mechanics that tie nicely into eachother. In order to trigger the game's most lucrative bonus feature, the super free spins players must collect symbols and fill a gauge, as opposed to land 3 or more on the game reels, which definitely gives this game a different feeling to most. A full breakdown of the features and mechanics are as follows:

During each spin of the reels there are a number of mystery symbols present on the reels. Each mystery symbol has a counter which reduces by 1 after each cascade. When the counter reaches zero all of the mystery symbols turn into the same random symbol, forming a winning cluster.

The game has two modes, players must select which mode they want to play before spinning the reels, this can be changed once you've begun playing. Firstly we have Lockdown Mode, in this mode, all mystery reveal symbols will have the same counter values. Secondly, we have Mixed Mode, here there are two independent counter values (which might be the same).

During every individual spin of the game reels, key symbols may randomly appear on top of normal symbols. Each key symbol awards between 1 and 10 keys, filling a gauge on the left-hand side of the game screen. After all the keys have been collected the Super Free Spins bonus activates.

Super Free Spins is a free spins bonus that's triggered when players have collected 2,000 keys. During each spin there's a mystery symbol present that will always reveal without any cascades required.

It’s possible to trigger an additional spin when revealing the Golden Mystery symbol in the Super Free Spins. When the symbol is present on the reels, two cascades will be required to reveal the additional spins.

The Super Free Spins is played at an average bet of which the keys were collected. 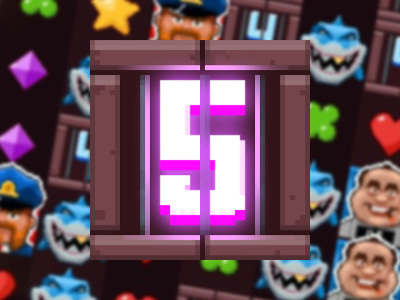 During each spin, there will be a number of mystery symbols present. Each mystery symbol has a counter which reduces by 1 after each cascade. When the counter reaches zero all of the mystery symbols turn into the same random symbol. 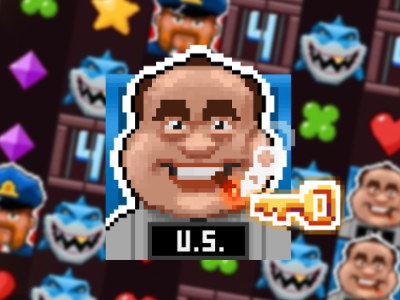 During every individual spin of the reels, key symbols may randomly appear on top of normal symbols. Each key symbol awards between 1 and 10 keys. After all the keys have been collected the Super Free Spins bonus activates. 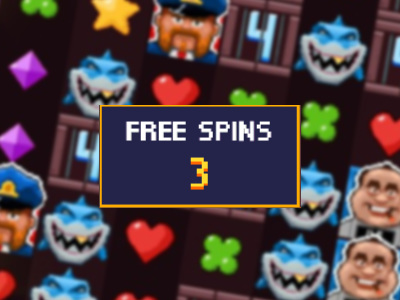 Super Free Spins is a bonus that's triggered when players collect 2,000 keys. During each spin there's a mystery symbol present that will always reveal without cascades. Spins are played at an average bet of which the keys were collected.

Hellcatraz is a wonderfully quirky 8-bit crime-themed slot developed by Relax Gaming that was released during the Spring of 2020. This unique game is themed around the infamous Alcatraz Prison and is filled with references to criminals, prison guards and being banged up on the famous island just off San Francisco Bay.

Relax Gaming have absolutely knocked this game out of the park when it comes to design! The reels are set upon the walls of the prison itself, which sits on a remote island surrounded by the Pacific Ocean, two police boats float in the sea surrounding the island whilst the Golden Gate Bridge and the San Francisco skyline sits majestically in the background.

During the bonus features the entire game scene changes from day to night and as prisoners try to escape from Hellcatraz! Smoke dramatically billows from the building whilst police helicopters and boats swoop upon the building in an attempt to apprehend escapees!

Everything is designed in an 8-bit manner, so it almost feels like you're playing an old-school 90s video game, which is pretty cool! In terms of symbols, the low paying symbols are a star, heart, four-leafed clover and diamond. High-paying symbols include a pair of handcuffs, a guards badge, a shark, a prisoner (that looks suspiciously like Al Capone) and a prison guard. Special symbols include a large W for the wild and mystery symbols that feature numbers in a barred up box.

In terms of sound, this game has a lot going on and we LOVE it! Starting off with the soundtrack... It's hard to describe, but the cheery chiptune music that plays throughout is beyond catchy! There's also a lot of ambient sounds throughout, such as seagulls squawking, the splashing of sharks in the ocean and police sirens in the distance.

Ultimately this slot operates like your standard slot, with wins being formed when symbols land on one of the 46,656 paylines, however, it does very much feel like a cluster pays slot (without being a cluster pays slot), due to the fact that it features cascading symbols and is laid out in with the same number as rows as there are reels.

In terms of navigating the slot, all of the key buttons such as turbo, stake selection, autoplay and spin can be found on the right-hand side of the screen, whilst on the left-hand side is a gauge that shows how many keys players have collected and allows players to switch between game modes. If you're playing outside of the United Kingdom, this is also where players will find the buy feature button.

When it comes to win potential, Hellcatraz is GLORIOUS, there's really nothing hellish about it! This slot has an RTP of 96.46% which is above average, and on top of that players can take home a massive 51,840x their stake! Excuse us whilst we pick our jaw up off the floor!

You don't see too many modern online slots offer such a generous winning potential, we couldn't be happier! The only downside is that the maximum bet isn't huge! But we can overlook that.

Honestly? We really did fall in love with this wonderfully designed 8-bit slot! If you're an old-school gamer then you'll instantly be hit with a heavy wave of nostalgia, if you like your gameplay volatile then you're more than sorted, if you're into big paying slots then buckle in because there's most certainly big money to be won. All in all, Hellcatraz is a fun and innovative game that more than deserves your time.

Play Hellcatraz now at the following verified UK slots sites. These slot sites are fully licenced and have been thoroughly vetted and reviewed by us to ensure they offer a great user experience, are trustworthy, secure, and have a wide variety of the best online slots in their lobbies including Hellcatraz:-

Enjoyed Hellcatraz? Here's a handful of similar slots we think you'll like too. These online slots have been chosen based on features and themes similar to Hellcatraz. You might also want to check out other Relax Gaming slots.