Pixel Samurai is a 5x5 jackpot slot developed by Playtech that can see players win an incredible 50,000x their stake! This 8-bit video game style slot celebrates Japanese culture in a quirky manner that'll certainly leave a lasting impression! For what this game lacks in bonus features it makes up for in win potential and creative design!

Jump straight into the action and play Pixel Samurai now at the following fully licenced UK slot sites. These slot sites have been thoroughly audited and reviewed by the team here at Slot Gods to ensure they offer an exceptional user experience, are trustworthy, safe, secure, and boast the best selection of online slots in their portfolio including Pixel Samurai...

Amazingly, unless you count the jackpot prizes that players can pick up when they land 8 or more of the game's most lucrative symbol, Pixel Samurai does not actually have any bonus features whatsoever.

This game relies solely on its unique style of gameplay that sees payouts recorded when clusters of the same game character land together. Considering players can land multiple clusters featuring different characters at once (and that new ones fall into place after a win) it's no surprise this game doesn't need bonuses.

When total multiplied wins can climb well up to 50,000x the players' stake, who actually needs free spins or any other bonus features like that? This game 100% offers more than enough to entice us. 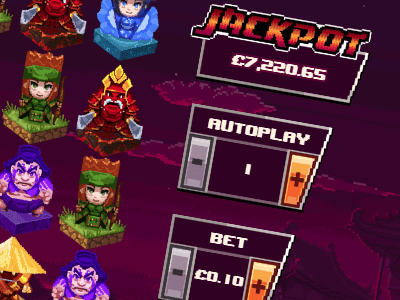 This gorgeous game is a unique hybrid between ancient Japanese samurai warriors and pixelated anime-style characters.

Behind the reels is a beautifully drawn town (designed in the style of an old-school 8-bit video game) full of Japanese temples and idyllic scenery such as trees, flaming lanterns and mountain ranges.

Each time the play button is pressed these characters will fly down from the top of the game screen dramatically and steady themselves as they land in place. They'll jump up again as they leave the reels to make way for a new combination of characters.

If you leave the game for a while without spinning the reels each of these characters will perform unique animations and do quirky little actions that will catch your attention.

In order to land winning combinations players must land 5 or more symbols adjacent to one another either horizontally or vertically (but not diagonally), It's that simple!

In terms of controlling the game, there's an orange spin button on the right-hand side of the reels. Above that are buttons that allow players to set their stake (between 0.10 and 10) and another set that allows players to set up to 99 automated spins. There's also a jackpot counter above all of these buttons that displays the current jackpot payout.

When winning combinations are formed a small box appears on the left-hand side of the reels informing players of their multiplied payout for each individual character, for example, if 6 green female Samurai's land then the box will read x6 pays and the payout.

This high volatility slot has an RTP of 93.98%, which isn't particularly terrible for a slot with a jackpot, however, it's the win potential that we really need to shout about... Brace yourself, this wonderful slot can see players win an absolutely massive 50,000x their stake!

We genuinely can't get enough of this game, for a modern online slot that doesn't retain any of the features of a standard game, it's incredibly easy to play. Playtech haven't overcomplicated things and we absolutely LOVE the fact we can win a percentage of the game's jackpot based on our current stake, rather than having to break the bank to be in with a chance of winning something.

Play Pixel Samurai now at the following verified UK slots sites. These slot sites are fully licenced and have been thoroughly vetted and reviewed by us to ensure they offer a great user experience, are trustworthy, secure, and have a wide variety of the best online slots in their lobbies including Pixel Samurai:-

Enjoyed Pixel Samurai? Here's a handful of similar slots we think you'll like too. These online slots have been chosen based on features and themes similar to Pixel Samurai. You might also want to check out other Playtech slots.