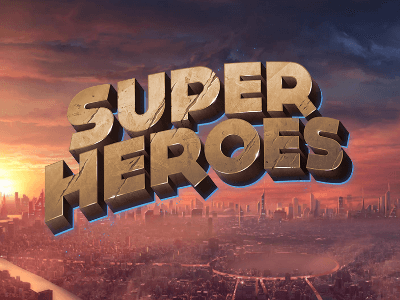 Developed by Yggdrasil, Super Heroes is a 5-reel, 20 payline slot that is all about superheroes. As per Yggdrasil's style, it feels like a Hollywood cinematic with engaging bonus features.

If you love the superhero genre and wanting something unique, then definitely check out this slot - you could even win up to 5,000x your stake.

“ An epic slot that definitely lives up to its name! ”

Jump straight into the action and play Super Heroes now at the following fully licenced UK slot sites. These slot sites have been thoroughly audited and reviewed by the team here at Slot Gods to ensure they offer an exceptional user experience, are trustworthy, safe, secure, and boast the best selection of online slots in their portfolio including Super Heroes...

At any time throughout the base game, two of the superheroes can show up at either side of the reels to take on the alien invaders. Each hero is assigned a level and will perform their special feature which can force big payouts.

The specific powers can change the game, and they are listed as follows:

Throughout the base game, 2 of the 6 superheroes may randomly show up at either side of the game to take on the alien invaders. This can force random modifiers such as multipliers and wilds.

You can trigger between 4 and 7 free spins with the different superheroes dropping onto the screen. The main free spins are activated when players land 3, 4 or 5 free spin symbols anywhere on the reels!

The superhero genre is one that is overly saturated at the moment and many slots are following the same formula. Thankfully, Yggdrasil has come to save the day and create something entirely amazing!

It follows the slot format as it plays on 5-reels with 20 paylines - but has a unique mechanic that utilises different characters and their individual powers. Super Heroes has 6 different characters that each have their own special abilities to help you throughout your playthrough. Can you help them defeat the bad guys and deliver some satisfying wins?

Yggdrasil is known for its visually stunning slots and this one is no exception. Despite being released in 2016, it looks as if it was made recently. Of course, it does look a little bit like an Avengers knock-off - but don't let that put you off.

As soon as you open up the slot, you'll notice an impressive cinematic that appears. It introduces all the characters and creates a cool introduction for the slot.

The game itself is setting above a metropolis and it's up to players to help the heroes defeat the aliens. The team consists of Raven, Mirage, Tesla, Hopper, Trance and Knox. They each have a specific colour and seem to have their own personalities - it's quite fun to see them jump around.

Sadly, the soundtrack didn't blow us away. It was just okay - but disappointing compared to the epic scale of the slot. Yggdrasil could've easily put in a more intense score to raise the stakes.

The gameplay isn't anything spectacular, but it's decent enough. It has the same formula as other Yggdrasil titles with the menus being at the bottom of the screen. You can find even more menus through the purple + on the left and this brings up valuable information such as the paytable.

Super Heroes is a medium volatility slot with a good RTP of 96.10%. The payout isn't huge at 5,000x their stake but decent enough considering when it was released.

Simply put, this slot is superb. Yggdrasil has continued to impress us time and time again with their slots - Super Heroes is no exception.

This superhero slot is unlike any other and stands out amongst the rest. Of course, the payout isn't brilliant so if you want higher you'd be best checking out the DC Super Heroes Jackpot series instead for progressive jackpots.

Play Super Heroes now at the following verified UK slots sites. These slot sites are fully licenced and have been thoroughly vetted and reviewed by us to ensure they offer a great user experience, are trustworthy, secure, and have a wide variety of the best online slots in their lobbies including Super Heroes:-

Enjoyed Super Heroes? Here's a handful of similar slots we think you'll like too. These online slots have been chosen based on features and themes similar to Super Heroes. You might also want to check out other Yggdrasil slots.