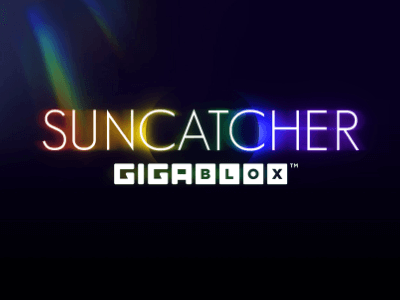 Ever wanted to look into a black void with only suncatchers to light up the way? Then you are in the right place with Yggdrasil's Suncatcher Gigablox.

Playing on 5-reels with 10 paylines, this slot uses the Gigablox mechanic along with wild respins to hypnotise you throughout this slot. It's simple and perfect for newcomers!

“ A hypnotic slot perfect for beginners to online slots ”

Jump straight into the action and play Suncatcher Gigablox now at the following fully licenced UK slot sites. These slot sites have been thoroughly audited and reviewed by the team here at Slot Gods to ensure they offer an exceptional user experience, are trustworthy, safe, secure, and boast the best selection of online slots in their portfolio including Suncatcher Gigablox...

Suncatcher Gigablox uses the Gigablox mechanic that has been used in a few Yggdrasil slots. This ultimately means that bigger symbols can land on the reels to lead to higher wins.

Aside from that, you can expect wild respins which are triggered when you land wilds on the reels. They expand to fill that individual reel and continue until there are either no more wilds left on the reels or you fill-up the reels with wilds. If you cover the entire reel with wilds, then you'll win 500x your stake.

There is also a feature called the Golden Bet and this doubles the bet size to give players a 3x higher chance of landing wilds during the base spin.

A famous mechanic from Yggdrasil, the Gigablox mechanic can provide bigger symbols (ranging from 2x2 to 6x6 in size). These fall onto the reels at random and lead to winning paylines.

Landing a wild will trigger the respins with that wild expanding to fill that individual reel. If another wild lands during the respin, then it continues until there are either no wilds or a screen full of wilds.

Yggdrasil has absolutely wowed audiences with the incredible Gigablox mechanic that has been featured in famous slots such as Hades Gigablox. It's no surprise that they've decided to utilise the mechanic again in Suncatcher Gigablox.

This slot plays on 5-reels with 10 paylines and a maximum win of 1,000x your stake. You can expect to play with the Gigablox mechanic along with wild respins as well throughout this slot.

Set amongst a black background, there is a white line around the reels to indicate the borders. Inside the reels, there are multiple different suncatcher diamonds to catch the light and they brighten up the slot. Now, the symbols sparkle and shine - but aside from that, the visuals aren't anything special.

The music is a tranquil score that is perhaps intended to relax players throughout spins. It feels like it fits in well with this slot but draws comparisons to Starburst within the tone and theme of the design.

There's little for players to learn with this slot as there are minimum features and everything is self-explanatory. The spin button can be found directly underneath the reels with the bet level and autospin just next to it. To the far left, you'll notice a '+' button which contains any further menus that may be needed.

Suncatcher Gigablox has a solid win potential with the RTP at 96.00% which is just above the average standard. It has a low to medium volatility level - which essentially means that wins will be frequent but lower paid. The maximum payment for this slot is 1,000x your stake according to the developers. You can win 500x your stake through spins and then add a 500x stake bonus through the Golden Bet to win a 1,000x stake.

It's clear that Yggdrasil wanted to create their own iconic simple slot like Starburst - but sadly this doesn't deliver. The visuals are fine enough - but lacking compared to Yggdrasil standards. Perhaps, if they had a little more going on in the background or better symbols on the reels, then it'd be a better slot. It has a subtle hypnotizing quality to the slot but it didn't work on us.

The win potential fits in fine as it's a low to medium volatility slot, so the low payout of 1,000x stake is expected. Overall, Suncatcher Gigablox is a strange one that isn't brilliant but isn't bad either. Of course, we'd recommend Hades Gigablox as a much better slot or even to try out Starburst instead if you are wanting something simple with decent wins. Who knows, Suncatcher Gigablox might become a surprise hit in the future but we just weren't that impressed.

Play Suncatcher Gigablox now at the following verified UK slots sites. These slot sites are fully licenced and have been thoroughly vetted and reviewed by us to ensure they offer a great user experience, are trustworthy, secure, and have a wide variety of the best online slots in their lobbies including Suncatcher Gigablox:-

Enjoyed Suncatcher Gigablox? Here's a handful of similar slots we think you'll like too. These online slots have been chosen based on features and themes similar to Suncatcher Gigablox. You might also want to check out other Yggdrasil slots.