NetEnt’s Starburst is quite simply the best. This player friendly sci-fi sensation has been around since 2013 and still comfortably sits atop the pile when it comes to popular online slots. If you’re after a game that’s easy to play and offers oodles of excitement then this is the one.

“ An iconic slot perfect for beginners and slot veterans ”

Jump straight into the action and play Starburst now at the following fully licenced UK slot sites. These slot sites have been thoroughly audited and reviewed by the team here at Slot Gods to ensure they offer an exceptional user experience, are trustworthy, safe, secure, and boast the best selection of online slots in their portfolio including Starburst...

Surprisingly, for such a popular slot Starburst lacks any sort of free spin feature. As mentioned above, there’s only one real bonus feature built into the game, the Starburst wild feature.

When a bright multi-coloured star appears on any of the middle three reels (reels 2, 3 and/or 4) it will substitute all symbols above and below it, expanding over the reel and triggering a re-spin. The maximum number of re-spins a player can receive during one bonus is 3. 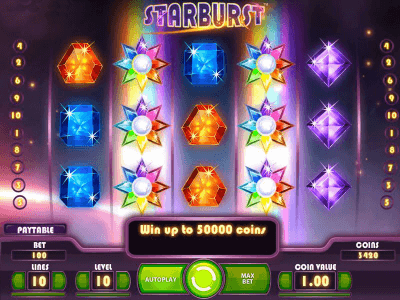 If the star symbol lands in any of the middle three reels it will expand and cover the entire reel, act as a wild symbol and trigger an immediate re-spin.

Starburst is arguably the most famous online slot game to-date. This no thrills, 5-reel, 10 payline space themed game is perfect to introduce new players to the world of online slots thanks to its sheer simplicity. It really comes as no surprise to us that many casinos choose to use this game as part of their welcome offer when enticing new players.

On the whole this game almost feels like an arcade game, you can play as little as £0.10p per spin and it pays out on a regular basis thanks to its low volatility, so if you’re looking for a game to enjoy on a small bankroll across a longer period of time then this is the game for you.

It’s important to note that Starburst only has one major feature to be aware of outside of standard play, Starburst Wilds. Despite being the sole bonus in this game, it brings plenty of excitement the players’ way… It’s not hard to see why this game is a cult hit with enthusiasts.

NetEnt’s Starburst is quite simply the best. This player friendly sci-fi sensation has been around since 2013 and still comfortably sits atop the pile when it comes to popular online slots. If you’re after a game that’s easy to play and offers oodles of excitement then this is the one.

Visually, Starburst shines due to its simplicity. The reels sit above a deep purple landscape space with stars gently floating around in the background. The reels themselves are adorned with sparkling purple, blue, orange, green and yellow gems. The two high paying symbols are your classic 7 and BAR symbols that you’d find in traditional slot games.

In terms of audio players are treated to a relaxing electronic sci-fi melody that fits the aesthetic of the game perfectly. The only time you’re dragged away from the relaxing synth tones is when a win is registered or the Starburst Wild reel comes into play, it’s here that the sounds are kicked up a notch, creating a great sense of excitement.

There’s very little for players to truly get to grips with when playing starburst. Before pressing the spin button players can adjust their bet level and coin value at the bottom of the screen in order to increase or decrease their stake. Players can opt to hit the Max Bet button if they’d prefer to do so rather than fiddle with the settings. That’s all there is to this effortless sci-fi slot.

With a low volatility, RTP of 96.10% and a maximum bet of £100 we think that Starburst has fantastic potential to pay out as long as you’re patient and are willing to make a fair few spins to see a truly big win before giving up and moving onto something else. Considering it’s not hard to land a Starburst Wild you should be seeing a whole host of modest regular wins flood in.

Starburst thoroughly deserves its crown as one of the greatest online slots to have ever been created. NetEnt truly hit out of the park with this sci-fi sensation. It says something that a game released in 2013 still has such an intense following many years later.

Regardless of whether you’re a complete beginner to online slots, or whether you’ve been around the block we absolutely guarantee you’ll be satisfied with what Starburst has to offer.

Play Starburst now at the following verified UK slots sites. These slot sites are fully licenced and have been thoroughly vetted and reviewed by us to ensure they offer a great user experience, are trustworthy, secure, and have a wide variety of the best online slots in their lobbies including Starburst:-

Enjoyed Starburst? Here's a handful of similar slots we think you'll like too. These online slots have been chosen based on features and themes similar to Starburst. You might also want to check out other NetEnt slots.