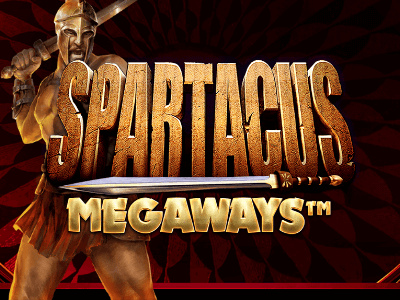 Journey back to ancient Rome with up to 1,000,000 ways to win in Spartacus Megaways. Playing on 6-reels with up to 16 free spins and expanding wilds.

This high volatility slot also features a maximum win of 12,500x with a satisfying RTP at 96.32%!

Jump straight into the action and play Spartacus Megaways now at the following fully licenced UK slot sites. These slot sites have been thoroughly audited and reviewed by the team here at Slot Gods to ensure they offer an exceptional user experience, are trustworthy, safe, secure, and boast the best selection of online slots in their portfolio including Spartacus Megaways...

As you open the slot, you’ll notice that you have up to 1,000,000 ways to win. When winning combinations are made, the symbols will explode with new symbols taking their place. Players will win the total amount for the spin once there are no more cascades.

You’ll also notice that there is a curtain covering certain positions on the reels, and this is randomised throughout each spin. However, the bottom reels consisting of rows will never be covered up by curtains.

There is a fantastic free spins round that can see players win up to 16 free spins. Free spins can even be retriggered if you land 3 or more scatters.

The amphitheatre scatter appears on all reels and landing 4 which activate the free spins feature. You are taken to a wheel to spin again to see how many free spins you can win. The wheel awards 6, 8, 10, 12, 14 or 16 free spins on the wheel.

As expected, the wild symbols substitute all symbols except the amphitheatre scatter symbol. During the free spins round, all wild symbols will expand to fill the entire reel.

Based on the legend of the gladiator Spartacus who was an escaped slave and even led a major uprising against the Roman Republic. This epic slot by WMS sees players working alongside Spartacus to defeat the Roman empire and gain the treasures of Rome but with a Megaways makeover this time.

Playing on 6-reels and up to 1,000,000 ways to win, there’s so much potential within this slot. With free spins giving up to 16 free spins and expanding wilds, players will be winning big in no time.

The background of the slot looks like an ancient Rome vase with engravings on telling the story of Spartacus. It features vibrant reds and gold contrasted with black to create something tasteful. The reels themselves are bright gold and stand outs enough so that you can clearly see it.

Symbols are semi-realistic with creatures such as tigers looking dangerous and ferocious. The titular character of Spartacus is faceless, so that the player can imagine themselves in this role. Overall, the design looks fantastic and fits in well with the tone of the slot.

During spins, there is a soft score that plays epic music. It’s exactly what you’d expect with a slot all about a gladiator, but it increases in intensity as you spins.

Whilst there are up to 1,000,000 ways to win, the gameplay is not confusing at all. It features cascading reels but that doesn’t change the overall gameplay. Newcomers will be able to pick up and play this slot if they choose to do so.

Players will be happy to find out that the RTP is at a reasonable 96.32% which is brilliant for an online slot. The maximum payout in this slot is 12,500x your stake which can be won by expanding the paylines to 1,000,000 and filling the reels with expanding wilds throughout free spins.

It’s a reasonable amount but may not be high enough to high volatility slot players. With no jackpot either, this may put off even more players.

As the sequel to the original Spartacus, Spartacus Megaways improves on it in every way. How can you go wrong with up to 1,000,000 ways to win? This combined with the high RTP and the free spins feature makes it a slot worth checking out.

The only disappointment has to be the maximum payout of 12,500x your stake, but it isn’t a deal breaker. If you love ancient Rome or mythical slots, then this is one not to miss.

Play Spartacus Megaways now at the following verified UK slots sites. These slot sites are fully licenced and have been thoroughly vetted and reviewed by us to ensure they offer a great user experience, are trustworthy, secure, and have a wide variety of the best online slots in their lobbies including Spartacus Megaways:-

Enjoyed Spartacus Megaways? Here's a handful of similar slots we think you'll like too. These online slots have been chosen based on features and themes similar to Spartacus Megaways. You might also want to check out other WMS slots.