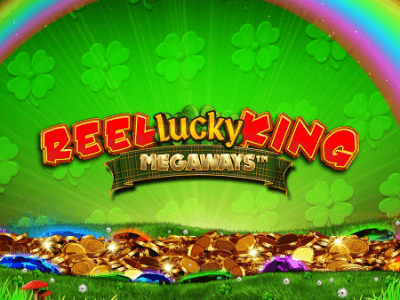 Megaways and Irish slots go together perfectly to create a slot that’s unmissable. With 6-reels and 117,649 ways to win, there are so many chances to win in this slot!

The main draw has to be the Reel King feature that can provide up to 25 free spins with unlimited multipliers and sticky respins. For an Irish slot with a twist, try out Reel Lucky King Megaways.

“ The Reel King is a game changer that brings up to 25 free spins with multipliers! ”

Jump straight into the action and play Reel Lucky King Megaways now at the following fully licenced UK slot sites. These slot sites have been thoroughly audited and reviewed by the team here at Slot Gods to ensure they offer an exceptional user experience, are trustworthy, safe, secure, and boast the best selection of online slots in their portfolio including Reel Lucky King Megaways...

All the games played in Reel Lucky King Megaways have up to 117,649 ways to win. The extra wheel will add an extra symbol to reels 2, 3, 4 and 5! Wins are part of cascades in the base game and the Reel King Free Spins section with symbols being replaced by new symbols coming from above on the reels.

The biggest draw has to be the Reel King Feature that has 3 different levels of entry and different bonuses attached to them.

Players can gain between 1 and 6 Reel Kings over the reels and will begin on the leftmost position on the free spins trail. Each of the Kings will spin their reels with individual prizes.

During the Reel King spin, if all the 3 reels become lit when landing - then the player moves one spot in the trail. The Reel King disappears after a losing combination and has less than 3 lit reels.

Free spins are indicated to the bottom of the screen with how many spins are remaining and the current multiplier. Each win will increase the multiplier by 1 and if you manage to get all the 6 reels red, then Reel King will appear.

It’s all about the Reel King in Reel Lucky King Megaways! This Irish themed slot is unlike any other with Megaways and the Reel King feature. It’s an innovative slot developed by Inspired Gaming that focuses all on the King. Many will be familiar with Reel King Megaways, and this slot is within the same family tree.

The aim is to light up the reels to provide bigger bonuses and get the King himself to help you out with the Reel King Free Spins that have an increasing multiplier. What more could you want in a slot?

From an initial glance, this slot looks like a traditional fruit machine slot as the symbols look classically designed. The background features a rainbow and Irish symbols with no animation. It does seem a little lifeless, but thankfully the gameplay itself isn’t like that.

Even the Reel King Free Spins seems empty without a huge amount of design but it’s not the worst slot we’ve ever encountered. It may just put off slot enthusiasts who are looking for cool-looking slots.

The music itself is a little more whimsical whilst keeping in tone with the Irish jig music. It’s light and catchy enough not to be too annoying - but it does play constantly. You can find the settings button to the right of the reels and mute it at any time.

As previously mentioned, this slot looks like a traditional slot machine and plays like one too. The addition of the Reel King isn’t too complicated and Megaways only adds more ways to win.

Like other Inspired Gaming slots, the settings are to the right of the reels with the spin and settings button. The autospin button is found by holding down the space button and brings up the options.

During the base game, players can win up to 50x their stake by landing 6 of the golden money pots. Of course, the free spins round has increasing multipliers that are unlimited meaning that the maximum could keep growing. Sadly, the developers have capped it but at a reasonable amount at 250,000.

As this is a high volatility slot, you can expect high wins but less frequently. The RTP isn’t as high as we’d like, but it’s a decent amount of 95.56%.

For an Irish slot, Reel Lucky King Megaways has a lot going for it. The design isn’t amazing but the gameplay and win potential is great, especially compared to Inspired Gaming’s Rainbow Cash Pots.

Reel Lucky King Megaways brings vibrant gameplay with the Reel King being phenomenal and a definite game-changer. If you love the Irish themed genre, then this is a slot definitely not to miss.