The Reel King Megaways slot from Inspired Gaming is based on the classic fruit machine produced by Novomatic. This 6-reel game has brought back the king of fruit machines and it comes with plenty of extras. The enthralling slot features cascading reels, a game engine with 117,649 ways to win, free spins, expanding multipliers and more!

“ A classic Vegas fruity brought back to life with a Megaways makeover. ”

Most fruit machine slots are pretty basic and lack bonus extras, but the Reel King Megaways slot is no ordinary fruit machine. This game is built with cascading reels and an engine that can deliver up to 117,649 ways to win, that’s just the tip of the feature ice burg. You will find a heap more bonus features amongst the fruit symbols, let’s take a look at what bonus games the Reel King Megaways slot offers. 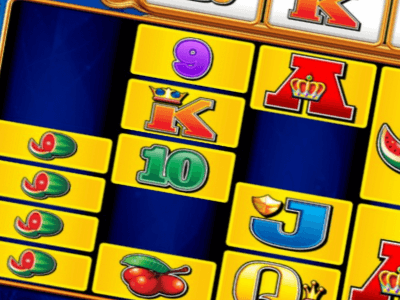 After each consecutive win, the reels cascade, removing the winning symbols and replacing them with fresh symbols. The process will repeat itself until there isn’t a win on the reels. 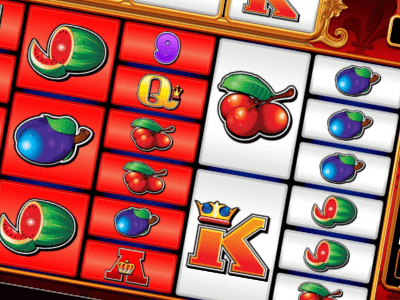 During play, any reel can light up, when a cascade win hit, another reel lights up. If all reels light up, the Reel King feature triggers. If more cascades arrive, the Super King or Mega King feature will trigger. Here you can get between 8 and 25 free spins with expanding multipliers. 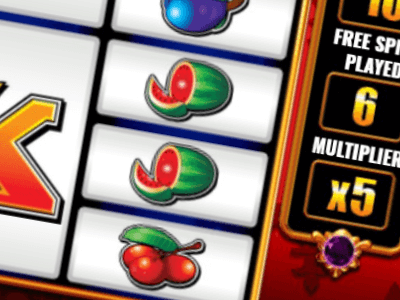 The Megaways setting offers unlimited win multipliers, so when free spins are in play, a win multiplier starts at 1x and will increase on every win, with no limit. 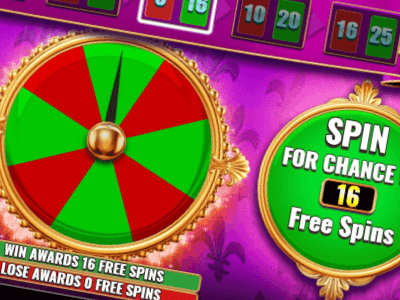 This is triggered automatically if your stake is lower than the current stake you’re playing. You spin the wheel and If you land on green you will get 1 more spin. If you land on the red, you will lose your balance.

A sequel to the iconic Reel King slot produced by Novomatic which was released back in 2003. This version of the game maintains that retro fruit machine appearance but bulks up the excitement. The game is played on 6 rows with between 2 to 7 symbols landing on each row. The Megaways game has a top payout of 10,000x your bet so there is plenty of awesome win potential.

The game is not short of thrill with cascading reels, free spins, mini reels, a gamble feature and more. The remake is certainly better than the original and with more wins, more features and more, who can argue with that?

Reel King is one of many online slot games to get the Megaways treatment. Reel King Megaways keeps it simple in terms of looks, maintaining the appearance of a classic fruity. The basic and bright aesthetics remind you of those classic Vegas slots while an exciting fruit machine soundtrack makes you feel like you’re standing in the middle of a Vegas casino.

On the reels, you will find cherries, melons, plums and more colourful symbols. The slot's background is very basic with a blue casino-style wallpaper that puts all the attention on the fruit machine. When you land a win, light up a reel or trigger a bonus feature, the thrill levels are ramped up through exciting visuals and high tempo audio.

As fruit machines go, it’s visually more exciting than most, but it’s still just a fruit machine. It keeps the old school appearance while bringing the new school fun.

The game is not your standard slot, this game is played across 6 reels and is built using the Megaways engine. The game doesn’t have aligned rows and almost looks a little jumbled up with a different number of symbols landing on each of the reels – the number of symbols on each reel is random. But fear not, you soon get used to the gameplay after a few spins.

The spin control is located on the right side of the reels, if you hold the spins control down you can set the auto spins up to 100. The bet amount is placed above the spin control, here you can set your bets between £0.20 and £20, making it a suitable choice for the casual slot player. Beneath the spin button is the information icon where you can view the value of each symbol and what the feature symbols are.

The slot is very discreet with the game controls, putting all focus on the reels. It may seem a little overwhelming to newbies but this fruity is a breeze to play.

Reel King Megaways has awesome win potential thanks to the abundance of in-game features and a decent 96.23% RTP. The highly volatile game has between 324 and 117,649 ways to win. If the right symbols land, you can scoop up to 10,000x your bet.

Although there are high paying symbols, it’s the bonus features that carry the true payouts. The biggest wins come during the free spins where an expanding multiplier is in play – this can rocket your real money balance.

Suitable for all bankrolls, the Medium to high variance game can be very rewarding.

Reel King Megaways has taken the classic fruit machine slot and turned it up a few notches. Although the game’s setup may seem complex, it’s very simple. The slot’s Megaways engine brings a much-needed addition to the fruity. Gone are the days of spinning reels to mind-numbingly boring fruit machines, Reel King Megaways is full of features, rewards and endless excitement.

Enjoyed Reel King Megaways? Here's a handful of similar slots we think you'll like too. These online slots have been chosen based on features and themes similar to Reel King Megaways. You might also want to check out other Inspired Entertainment slots.