The first rule of Punch Club is that you don't know about it - and you've failed! This underground fight scene sees people compete for the grand prize of 5,506x your stake.

“ A wacky slot with a mediocre maximum payout ”

During the playthrough, wilds can appear at any time with different multipliers starting at x1 and building up to x3. With these multipliers, you can win up to 3000x your stake during this playthrough.

Aside from the wild multipliers, you can collect 3 or more scatters to trigger 10 free spins. During this mode, scatters switch high symbols into wilds and when this happens - additional free spins are awarded. 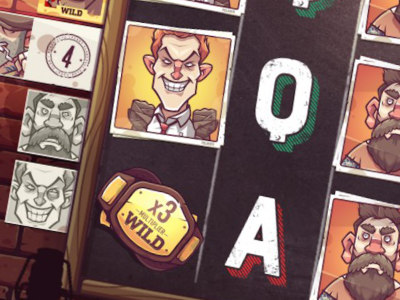 Naturally, the wilds substitute any symbols except the scatter. When they appear, they can have different multipliers attached that can go up to x3. 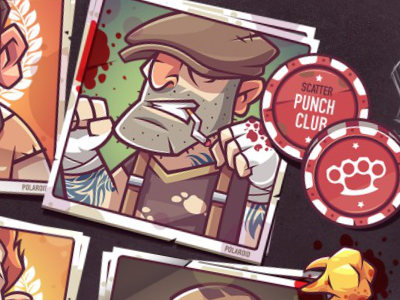 Heavily inspired by the iconic Fight Club film, Punch Club is a parody of that but instead with the focus being on punching instead of general fighting. Developed by Peter & Sons, this crime slot plays on 6-reels with 25 paylines.

This slot features random wild multipliers and free spin bonus games with high symbols transforming into wilds. If you fight your way through the slot, you could win up to 5,506x stake.

Of course, the visuals in Punch Club quintessentially Peter & Sons as the character designs are similar throughout. Each of the characters has an overly cartoonish design that makes them seem more like caricatures instead of more realistic designs. Once you land wins with certain characters, their avatars turn bloody and more beaten which is a nice attention to detail.

You'll find the slot set in an underground bar that contains messed up bricks covered in blood alongside alcohol and other things you'd expect in shady bars. It's exactly what you'd expect!

The music in Punch Club emits a noir theme with jazzy sounds such as saxophones and drum beats. It creates the atmosphere of something underground and shady going on - which is exactly what Punch Club is. In terms of ambient noises, there aren't really any aside from the noise of the boxing bells.

Like most Peter & Sons products, Punch Club is straightforward to play with the gameplay being easy to follow with only 5-reels on 25 paylines. To the right of the reels, you'll notice the spin button highlighted in red with the other menus available to see underneath. Starting from the bottom right of the reels, you'll find the autospin, bet level, sound and other general settings such as paylines.

Punch Club is a medium volatility slot with a great RTP of 96.09%. The maximum payout for this slot is 5,506x stake and this comes from the multipliers during free spins mixed with the wilds to create bigger payouts. Sadly, this is the maximum that you can gain in this slot, so high rollers may not be satisfied.

There's no denying that Punch Club isn't a hilarious slot that does exactly what it tries to do. You get free spins mixed with multipliers and tones of fun gameplay. Despite this, the maximum payout just lets down the slot too much and ends up making Punch Club into a generic slot.

Of course, if you love wacky slots full of character then you should definitely check out Punch Club. If you love Peter & Sons and want a slot with a better payout, then definitely try out Robin: Nottingham Raiders.

Play Punch Club now at the following verified online slot sites. These slot sites have been thoroughly audited and reviewed by us to ensure they offer an exceptional user experience, are trustworthy, safe, secure, and boast the best variation of online slots in their portfolio including Punch Club:-

Enjoyed Punch Club? Here's a handful of similar slots we think you'll like too. These online slots have been chosen based on features and themes similar to Punch Club. You might also want to check out other Peter & Sons slots.