Ahoy there matey! Pirates' Plenty: The Sunken Treasure is the first instalment in the iconic Red Tiger Gaming series that's all about living the life of a pirate! If you're after big bonuses and huge wins then this 5-reel, 20 payline slot is the one for you.

“ One of the best pirate themed slots out there! ”

Pirates Plenty: The Sunken Treasure has the three main features: The Wild Ships feature, the WIld Monkey feature and the Ocean Spins feature. As you’re playing you’ll notice that you’re accumulating map pieces randomly every so often. Each time you collect a piece of a map your ship sails towards an X marks the spot on a map on the right-hand side of the reels.

When your boat has reached the X marks the spot then you’ll immediately unlock an additional sixth reel known as the treasure reel. This reel will remain in place for as long as you’re playing the game at the same stake you were playing when it was unlocked. 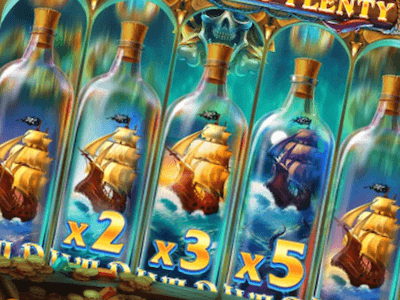 At any time during the base game once the additional treasure reel has been activated (the sixth reel) one of four different extra tall wilds in the shape of a glass bottle (with a pirate ship inside) may appear to cover a reel.

Bottles act as wilds, and three of the bottles have multipliers, these are 2x, 3x and 5x. 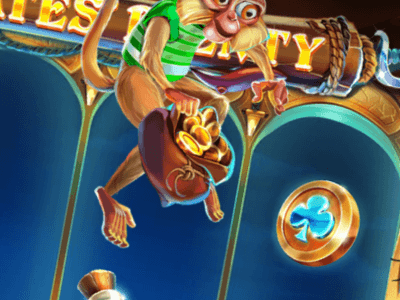 If a Wild Monkey symbol lands anywhere on the reels during base gameplay then the monkey will steal low paying symbols from the game reels and replace them with high paying ones, potentially leading to a big winning combination. 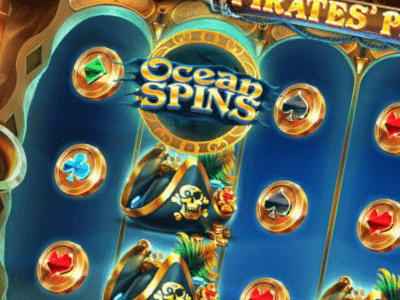 3 treasure chests will appear above the reels, these can be unlocked by key symbols that land on the reels during the bonus.

If you manage to unlock all 3 of the chests then a randomly picked low-value symbol will turn wild, you’ll also receive an additional free spin.

Pirates Plenty: The Sunken Treasure is renowned developer Red Tiger Gaming’s first attempt at putting their own spin on a pirate themed online slot, and boy have they done a good job.

This highly volatile 5-reel, 20 payline slot is famed for its innovative features that include extra tall wild multipliers, respins that see low-paying symbols replaced by more valuable symbols, free spins and the very lucrative addition of a sixth reel.

This game has all the hallmarks of a quality Red Tiger Gaming creation, what’s more, this fantastic slot is often linked to Red Tiger Daily Jackpot at many popular online casinos, so you could win a life-changing sum of money playing Pirates Plenty: The Sunken Treasure.

Red Tiger really did go all out when designing Pirates Plenty: The Sunken Treasure. Rather than place the reels on top of a generic pirate themed background they have instead created the entire game to look like the inside of a Captain’s quarters on a pirate ship.

Gold coins and jewels are scattered across the table in the centre of the screen whilst weapons and even more gold is piled either side of the reels.

The reels look as if they’ve been set up against the window of the ship, however, it’s quite difficult to tell whether what we’re seeing when we look through the window and past the game symbols… It’s either the ocean during the night or the very bottom of the ocean! Based on the name of the game we’d hazard a guess that it’s the latter of the two.

Low paying symbols are gold coins with card symbols set into them in the form of colourful gems, these are the club, heart, diamond and spade. The high paying symbols include a vial of poison, a set of pistols, a cannon, a pirate hat and a skull and crossbones.

In terms of sounds, a generic high-octane tune that wouldn’t seem out of place in a movie plays on repeat as you spin the reels.

The game follows the same standard format as all Red Tiger Gaming slots, the stake can be set using a dropdown menu in the bottom left-hand corner of the game screen, the spin button is opposite this in the bottom right-hand corner.

Players can set up to 100 autospins by pressing the button next to the stake, however, to do so they must first set a loss limit indicating how much they’re willing to lose during this period.

This high volatility slot has a slightly below-average RTP (95.07%) which does let this game down a little bit, however, we can never truly write off a game when it has a maximum win of 5,000x the player’s initial stake (or more!).

You’re most likely going to need a pretty sizable bankroll if you want to make the most out of this game. If you’re just looking for a quick casual spin or two then look elsewhere, if you’re ready to board the ship for the long-haul then absolutely play this game, you won’t regret it!

We’ve come to expect nothing but the best from Red Tiger Gaming, and Pirates Plenty: The Sunken Treasure is most certainly amongst the best. It looks great, sounds great and is an absolute pleasure to play, especially when that sixth reel comes into play. Head into this game with tempered expectations and a big enough bankroll and you’ll be rewarded for your patience.

Play Pirates' Plenty: The Sunken Treasure now at the following verified online slot sites. These slot sites have been thoroughly audited and reviewed by us to ensure they offer an exceptional user experience, are trustworthy, safe, secure, and boast the best variation of online slots in their portfolio including Pirates' Plenty: The Sunken Treasure:-