Immortal Romance is a timeless 5-reel, 243 payline horror themed slot developed by Microgaming that's seen some upgrades over the years since its original release in 2011. This slot features 4 different free spin bonus features and a wild desire feature that turns up to 5 reels wild! If you're after a truly exciting high-volatility slot then this cult classic is worth a spin. We'd also urge you to check out the info page of this game for a nice surprise if you enjoy story-led slots!

Immortal Romance is mostly all about the Chamber of Spins feature, which sees players receive free spins with different modifiers. This feature can be triggered by seeing either 3, 4, or 5 lion scatter symbols anywhere on the reels.

Players must work their way through the bonus rounds incrementally, once one is has been earned the next one will unlock after the bonus has been triggered a certain amount of times.

This slot also features a Wild Desire feature that can be randomly triggered at any time. The reels will spin for slightly longer than usual and suddenly ramp up in speed as all up to five game reels turn wild, triggering a number of big winning paylines. 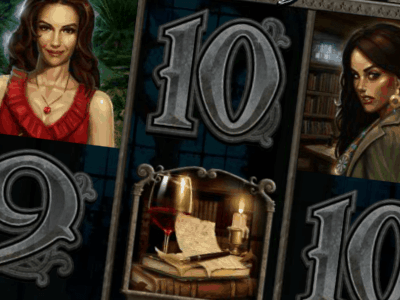 The Chamber of Spins

The Chamber of Spins is Immortal Romance's free spin bonus feature. Each bonus round differs depending on which character triggers it, each offering different special modifiers. 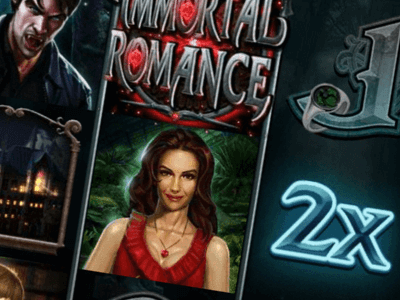 Wild Desire is a randomly triggered bonus feature that sees up to five game reels turn wild, unlocking new paylines for players to benefit from in the proccess.

If you somehow haven't come across this wonderful online slot before, Immortal Romance is a hugely popular 5-reel, 243 payline slot that was developed by Microgaming way back in 2011. Since then, however, this horror-themed masterpiece has received a fresh lick of paint, with the developers opting to return to the slot to give it some much-needed upgrades rather than create a sequel, not something we see too much of in this day and age.

If you like your slots to have depth to them, with a rich story to compliment the game's exciting bonus features and mechanics then you'll most certainly find Immortal Romance to your taste.

Immortal Romance still retains a bit of an old-school charm about it, despite having seen some minor graphical upgrades since it first came out. Whilst this gothic slot is most certainly dark and atmospheric, it certainly doesn't overdo it with the theming, which some games in this genre are guilty of doing.

The game is set within the room of a castle dimly lit by what appears to be nothing other than moonlight. The reels themselves are designed to look as if they're built by stone. The game symbols are hand-drawn portraits of our characters and gothic-themed card symbols 9, 10, J, Q, K and A.

Whilst a lot of credit goes to Microgaming for making a game that looks and sounds fantastic, there's actually a bit more to this slot than meets the eye when it comes to the world the developer has built around this title.

If you head over to the game's paytable you'll find that each and every character that's represented as a game symbol has their very own in-depth biography and story written about them, not only that but a narrator will read each one to you as and when you click through onto them. It's a design-element we've never come across before in an online slot game and we LOVE it.

There aren't many slots out there (If any) that are designed to tell an epic tale of forbidden love between humans and vampires. Yes, it sounds a little bit cliche, but at the time of development films and TV shows such as Twilight and True Blood were all the rage, so it's not hard to see why this slot has done so well over the years.

Immortal Romance is a simple game to master, all of the buttons you'll need are situated on the far right-hand side of the screen with the denomination button and autoplay button finding themselves below and above the main spin button respectively. Players can also click the lightning bolt button if they wish to enable to quick spin feature.

Heading over to the paytable will reveal a long page detailing everything you need to know about this game including bonus features, symbol values and of course information on each and every mysterious character that appears in this epic slot.

This high-volatility slot has a more than agreeable RTP of 96.86% and a maximum payout of 12,150x the player's initial stake. So all in all we can't turn our nose up at Immortal Romance as it delivers on all fronts when it comes to value for money.

This beautiful and truly entertaining game stands head and shoulders above many other horror-themed slots for a number of reasons. If you're after a title that you can truly lose yourself in, that could potentially offer players a solid return for the time they invest, then Immortal Romance would be a great choice of game.

Play Immortal Romance now at the following verified online slot sites. These slot sites have been thoroughly audited and reviewed by us to ensure they offer an exceptional user experience, are trustworthy, safe, secure, and boast the best variation of online slots in their portfolio including Immortal Romance:-

Enjoyed Immortal Romance? Here's a handful of similar slots we think you'll like too. These online slots have been chosen based on features and themes similar to Immortal Romance. You might also want to check out other Microgaming slots.