Created in a duel collaboration between Foxium and Microgaming, Boom Pirates is a truly unique 5-reel, 1,024 payline slot that can see players unlock up to 10,077,696 paylines with the game's innovative wonderways mechanic. This unique cluster pays slot sees more of the grid open up when the Boom Pirates feature is active, leading to huge win potential. This game also boasts randomly triggered wins (on losing spins), free spins and a buy feature.

Jump straight into the action and play Boom Pirates now at the following fully licenced UK slot sites. These slot sites have been thoroughly audited and reviewed by the team here at Slot Gods to ensure they offer an exceptional user experience, are trustworthy, safe, secure, and boast the best selection of online slots in their portfolio including Boom Pirates...

Boom Pirates revolves around the Wonderways mechanic, which is essentially the same as Megaways (but developed by Foxium), this mechanic allows for more reels and rows to unlock. This allows for millions of paylines to come into play, 10,077,696 to be exact, which is absolutely HUGE!

The game also features a unique Foxify button that allows players to pay 50% more on each and every base game spin, giving them an increased chance of triggering a bonus feature. There's also a bonus buy feature for those playing this slot outside of the United Kingdom.

There are free main bonus features built into this busy slot. Firstly, we have the free spins feature, which sees players receive up to a total of 15 free spins whenever scatters land on reels 1, 3 and 5.

Secondly, we have the Boom Pirates feature, this sees a cannon shoot randomly at the reels any time during the base game, smashing away the blocked reels/rows to unlock more paylines (up to a total of 10,077,696).

Finally, we have Mary's Swashbuckling Attack this sees Pirate Captain Mary randomly swing on the reels after any losing spin, changing some of the symbols, automatically awarding players with an unexpected and very welcome 5-of-a-kind win. 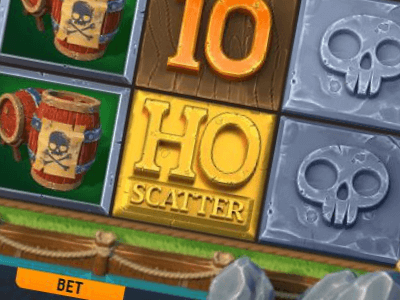 When 3 scatters appear anywhere on reels 1, 3 and 5 players will receive 10 free spins. 3 additional scatters will activate 5 extra free spins. Additional paylines can also be randomly activated during this bonus. 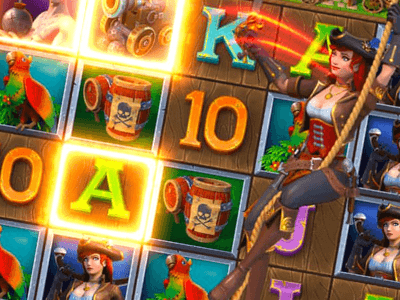 Pirate Captain Mary may randomly swing on the reels after any losing spin, changing some of the symbols, automatically awarding players with a 5-of-a-kind win. 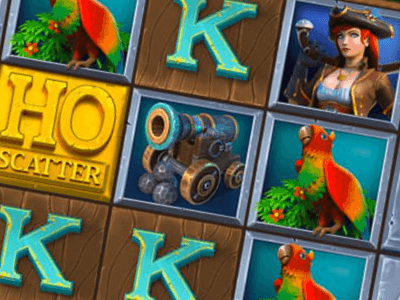 The Boom Pirates Feature is a randomly triggered feature that sees a cannonball is shot at the game grid, this activates a random number of extra rows and reels, unlocking up to 10,007,696 paylines.

If players activate the Foxify feature they'll have to pay 50% more on their base game bet, but will have a much greater chance to trigger the Boom Pirates feature. This feature is only active during the base game.

Yahaaaaar! How do you like the idea of a game that has an absolutely incredible 10,007,696 ways to win? If that sounds good to you then climb aboard the ship and get spinning the reels of Pirate-themed slot Boom Pirates developed by Foxium and Microgaming.

This unique slot is played on a 9x6 game grid that initially starts off as a 5x4 grid, the game grid expands as players trigger winning combinations on the reels, unlocking more and more ways to win as you go.

Boom Pirates is unlike anything we've seen before in terms of layout and design, but we absolutely love it! When Foxium were designing this game we think they had old school top-down games in mind, such as Blizzard Entertainment's Warcraft series, as the scene behind the game grid looks quite reminiscent of that.

In terms of sound, the same music adventure-themed music is looped over and over again, it certainly fits the overall design and theme of the game, but it is quite annoying after a while, so you might want to hit that mute button eventually.

This is a strange game, but we're not complaining! The game is played on a 9x6 game grid with the vast majority of the symbols blocked out (players start with a 5x4 grid unlocked), as the game progresses more blocks are unlocked using the Wonderways system (which is similar to Megaways in that it sees more paylines open up).

In terms of navigating the game, as is usually the case all of the important buttons are on an action bar along the bottom of the game screen.

Medium/High volatility slot Boom Pirates has an average RTP of 96.19%, which we always like to see, but for a modern slot it does have quite a low maximum win potential, with players only able to win 3,800x their initial stake, which seems quite odd considering the game has a MASSIVE 10,077,696 ways to win. With over ten million paylines you think you might have some really big, life-changing payouts.

Boom Pirates looks good and feels great to play with some genuinely exciting bonus features and mechanics to boot. However, it's genuinely hard to look at this slot as anything other than a huge missed opportunity. How can a game have 10,007,969 wonderways (ways to win) and only offer a max payout of 3,800x?

Play Boom Pirates now at the following verified UK slots sites. These slot sites are fully licenced and have been thoroughly vetted and reviewed by us to ensure they offer a great user experience, are trustworthy, secure, and have a wide variety of the best online slots in their lobbies including Boom Pirates:-

Enjoyed Boom Pirates? Here's a handful of similar slots we think you'll like too. These online slots have been chosen based on features and themes similar to Boom Pirates. You might also want to check out other Microgaming slots.