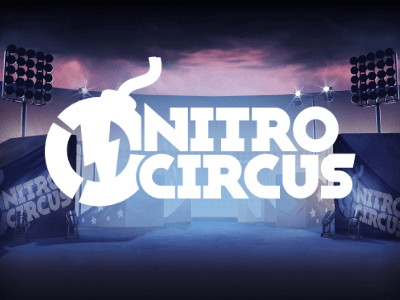 The first-ever branded slot by Yggdrasil and it's all about Nitro Circus! It's an adrenaline-fuelled slot featuring some of the biggest stars and stunts within the history of Nitro Circus.

Nitro Circus plays on 5-reels with 25 paylines and contains an abundance of features. From the Nitro Blast Mini-Game to the Nitro Jump Bonus, you'll be thoroughly entertained by this bonkers slot.

“ An adrenaline-fuelled adventure with some of the most exciting features we've ever seen! ”

The first major feature in Nitro Circus has to be the Nitro Blast Mini-Game which can award 1 of 5 prizes to players. These prizes include:

Of course, Nitro Circus has a free spins mode that is triggered by landing 3 or more Nitro Bomb symbols.

Throughout the Nitro Blast Mini-Game, vehicles appear and players have 4 different vehicles to collect. Collecting 5 identical vehicles will trigger the Nitro Jump with the collected vehicle. These could include:

Of course, these vehicles can be used in the Nitro Jump but if you manage to land ‘N-I-T-R-O’ instead, then you’ll be able to choose a different vehicle. These include:

The Nitro Jump is the ultimate feature for this slot as there are 4 different rounds for players to compete in. During the warm-ups, players can win between 5-300 coins per jump and win other prizes such as vehicles, speed boosts or multipliers for the final jump.

It’s the final jump that really counts and can award a huge win with multipliers. Of course, if the player crashes, then they’ll gain an award of 25-100 coins.

Players that land 2 Nitro Bomb symbols will trigger the Nitro Blast Mini-Game which can award players 1 of 5 bombs with different prizes attached to them.

If you land 3 or more Nitro Bomb symbols in the base game to trigger Nitro Free Spins. It starts with a 2x multiplier which can be increased with the Nitro Blast Mini-Game. Players can win up to 30 free spins during this mode.

Collecting 5 of the minor vehicles or landing ‘N-I-T-R-O’ on the reels in one spin will trigger this feature. This mode is made up of 3 warm-up jumps and 1 real jump. The warm-ups are judged and awarded accordingly. During the real jump, players can win big on multipliers!

Yggdrasil are renowned developers known for some of the most creative slots we’ve ever seen at Slot Gods. Nitro Circus is their first-ever branded slot and focuses on the TV show of the same name.

For those of you who haven’t heard of Nitro Circus, it’s a sports TV show that follows Travis Pastrana and his friends as they travel around the world performing stunts, base jumping and riding dirtbikes. As the show has gotten bigger and crazy, so have the vehicles! This slot encapsulates the bonkers aspect of the slot and makes it an adrenaline-filled ride.

When the slot opens up, you’ll be gifted an exhilarating introduction that completely builds up the atmosphere. It shows a variety of riders and stunts that just look incredibly cool. There’s no doubt that it’s one of the best cinematics we’ve ever seen in a slot.

As expected, the symbols all fit within the Nitro Circus theme with famous riders and helmets as the key symbols. The typical playing card letters are replaced with N, I, T, R and O to build up to one of the key features.

Music-wise - it’s what you’d expect for a Nitros Circus slot. With drums, bass and guitar combined to make a rock score that builds up suspense and intrigue.

There’s no denying that the visuals just look captivating and pull you into the crazy world of Nitro Circus - thankfully the gameplay does the same. You spin and build up one of the four amateur vehicles to ride on. Overall, the features are astonishing and just thoroughly impressive.

If you need anything, you’ll be able to find it at the bottom of the slot. From bet level to settings, it can all be found at the bottom of the reels. Naturally, the spin button is in the middle and next to the autospin. Players can set between 10 and 1,000 autospins if they want.

According to the developers, the biggest win is 258,750! The game itself states that up to 50,000 coins can be won and most likely through the Nitro Jump Feature. It has an incredible RTP of 97% which is almost unheard of in online slots.

Yggdrasil are outstanding in terms of design and creativity in their slots as they always bring something new and innovative. Thankfully, Nitro Circus is no exception. This TV/Movie slot brings in the excitement from Nitro Circus and applies it to modern slots.

Sure, the wins aren't going to be life-changing but they will be completely exhilarating. All of the different features combine to create something that's completely cool and you definitely don't want to miss out.

It's highly rated that you try out Nitro Circus and see what all the fuss is about. If you love this slot, make sure to check out Yggdrasil's other titles such as Hades Gigablox and Dr Fortuno.

Play Nitro Circus now at the following verified online slot sites. These slot sites have been thoroughly audited and reviewed by us to ensure they offer an exceptional user experience, are trustworthy, safe, secure, and boast the best variation of online slots in their portfolio including Nitro Circus:-

Enjoyed Nitro Circus? Here's a handful of similar slots we think you'll like too. These online slots have been chosen based on features and themes similar to Nitro Circus. You might also want to check out other Yggdrasil slots.