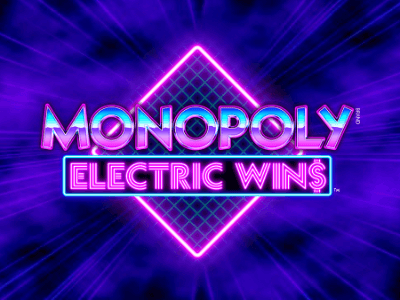 Monopoly Electric Wins is a quirky 5-reel, 729 payline gaming-themed slot based on the classic game of Monopoly. This slot uniquely combines a traditional online slot game with an actual game of Monopoly, so along with every spin of the reels you'll actually get to throw dice and work your way around the board! It's a LOT of fun and well worth trying out for yourself.

This unique game sees players roll two dice every time they spin the reels, they then move around the Monopoly board, potentially landing on one of the special segments that are detailed below, these segments modify what's going on the set of reels in the centre of the game screen.

If players land on an empty segment they'll mark it as "owned", all properties of the same colour must be owned before any property development can occur.

Once a player owns all properties in a colour set they build houses by landing on those segments again. After 4 houses are built the subsequent development is a hotel.

The Free Spins feature is triggered when a full set of hotels (2 or 3 depending on the property colour) are developed on a set of coloured properties. In the event that Free Parking completes more than one hotel set, a single Free Spin is awarded.

Players must then throw dice to determine how many free spins they receive, this can be anywhere between 4 and 16. If the initial dice roll is less than 5 then the dice are rolled again and the result is added to the first roll.

During the Free Spins feature, an alternate set of reels is used, however, the player still moves around the board according to all standard board rules.

Players throw dice on each and every spin of the reels and work their way around a Monopoly board. Some of the board segments modify what's happening on the set of reels in the middle of the game screen.

Players can trigger a number of free spins (determined by a dice throw) when a full set of hotels are developed on a set of coloured properties. In the event that Free Parking completes more than one hotel set, a single Free Spin is awarded.

Each spin of the reels sees players throw a set of dice that sees them work their way around a game board, collecting modifiers and placing houses and hotels down on vacant spaces in an attempt to trigger a lucrative free spin bonus feature.

This futuristic slot is designed to look just like the real-life Monopoly board, however, in this case, everything is designed in bright blue neon colours! There's a real 80s aesthetic to this game, and we're all about that vibe.

You'll find plenty of nods back to the original game of Monopoly on the board itself, with many famous symbols recreated especially for this slot. Low paying symbols are a neon version of game pieces found in the modern editions of Monopoly, these are a top hat, a luxury motor car, a Tyrannosaurus Rex and a boat. High paying symbols include a policeman, an engagement ring and a chest filled with money. The game's scatter symbol is a neon pink light bulb and the game's wild symbol is a neon pink shield with the word 'WILD' across it.

In terms of sound, the 80s-style soundtrack is pretty non-intrusive, it's certainly not a bad listen, but it does wear thin after a while, like most music you'll find in online slots.

If you've read through the features section of this review then you'll be under no impression that this is a straight-forward, simple slot game. Not only do players spin the reels each time they press play, but they also throw dice that sees them move a set number of places around a Monopoly board, potentially adding modifiers to the reels or placing properties and hotels down on empty spaces.

In terms of navigating and actually playing the slot, there are literally only three buttons to be aware of... So as you can imagine, things are surprisingly straightforward! From left-to-right, there's a help button that allows players to access information about bonus features and modifiers, a play button and a stake selection button that allows players to set their stake between 0.20 and 15.00.

This medium volatility slot has an absolutely fantastic RTP of 97%, which is well above average, so you can say it certainly caught our attention when we spotted the figure. The only downside however is that the maximum win isn't at all high at just 1,000x the player's stake, which is bitterly disappointing for a slot released in 2021.

Monopoly Electric Wins is an excellent slot with plenty to offer if you like games a little out of the ordinary, the addition of an actual Monopoly board you get to work your way around with dice really makes it worthwhile in our opinion! It's not a particularly demanding game either, so you can expect to pick up some good wins quite often! What's not to like?