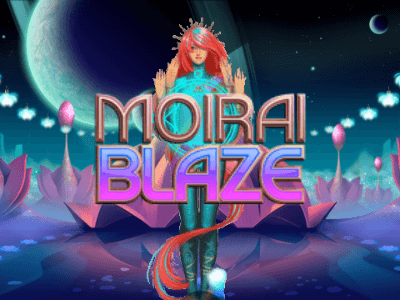 Join this mythical slot on a fantasy tale of Diwali and the spectacular festival of lights with the goddess of wealth herself Lakshmi.

Symbols tumble in this innovative slot to match wins instead of traditional paylines. You’ll find free spins, exploder symbols, Ganesha Powerball and much more in this medium volatility slot.

“ Enticing tumble mechanics and fiery features, sadly even Lakshmi’s payout is a little low for us ”

Jump straight into the action and play Moirai Blaze now at the following fully licenced UK slot sites. These slot sites have been thoroughly audited and reviewed by the team here at Slot Gods to ensure they offer an exceptional user experience, are trustworthy, safe, secure, and boast the best selection of online slots in their portfolio including Moirai Blaze...

As soon as you start the slot, you’ll notice that it uses a tumble mechanic instead of the traditional payline system. Instead of matching up 3 or more symbols on reels, you instead match up 5 symbols horizontally and vertically giving you more ways to win.

Naturally, the game features wilds, free spins and replacing symbols to give you a better chance of winning big.

Instead of traditional paylines, you win by matching up at least 5 symbols on the reels. Tumble wins will fall off the reels and be replaced by falling symbols. There’s no need to worry about paylines as it’s all about matching up symbols.

If a total of 100 or more symbols are destroyed and replaced on the reels, then free spins will activate. Players receive 15 free spins throughout this round but can win additional through the Ganesha Powerball.

Landing this symbol can destroy all symbols in a cross and diagonal shape or all symbols of a specific type. It will leave a wild in its place to help you win a bigger payout.

Sadly, the Ganesha Powerball isn’t available during the base game but it does come into effect during free spins. If it appears randomly during free spins, you can win a free respin and increase the global multiplier!

Be transported across the Cosmos for a Diwali festival unlike any other. On your journey you’ll find goddesses there to help you out and share their wealth with you. Developed by Iron Dog Studio, Moirai Blaze plays on a grid of 7x7 with no traditional paylines. Instead there is a tumble feature in which symbols fall off the reels and others tumble back on.

Visually, Moirai Blaze looks like a science fiction film which I think is intended by the developers. It’s not the traditional Diwali festival but rather one set in the future. The goddess Lakshmi is here to help you gain wealth and her design is incredible. She looks entirely ethereal like some mythical creature. The rest of the designs on the slot feel futuristic mixed with mystical elements really feel unique.

Naturally, the sound track is 80s synth inspired. That’s not something you’d expect covering Diwali but it goes with the tone of the slot. The reels make a soft techno sound as they tumble and it’s all quite pleasing on the ears. You’ll be turning up the music rather than muting it.

As previously mentioned, Moirai Blaze uses tumble mechanics throughout the game so you don’t even need to mesmerise paylines. You spin and look for a match of at least 5 to win. Like most Iron Dog games, the traditional settings are top left with the gameplay settings at the bottom left. The spin button and autospin button are situated to the bottom left. For players wanting autospins, you can set between 5 and 999.

Incredibly, Iron Dog Studios haven’t let players down as the RTP is at a fantastic 96% which is above the average standard of 95%. The medium volatility makes it easy for both high rollers and those who prefer frequent smaller payouts.

In the base game, you can win up to 2,000x your stake by matching between 21 and 48 symbols. Even though there is a multiplier, the game rules state that the maximum payout is 2,000x your stake and payouts above that amount will be limited to this. So be aware of this.

Moirai Blaze looks stunning and plays pretty well too. The mechanics are similar to Cluster Pays which forgo the traditional payline system. It adds loads of fun to the slot with more excitement when you win.

The low maximum payout is a let down - especially considering the slot isn’t low volatility. That’s the only really downside really as the rest of the game is full of engaging moments and a great win potential. It's definitely a mythical slot unlike any other we've seen at Slot Gods. If that sounds like a slot for you, then check out Moirai Blaze.

Play Moirai Blaze now at the following verified UK slots sites. These slot sites are fully licenced and have been thoroughly vetted and reviewed by us to ensure they offer a great user experience, are trustworthy, secure, and have a wide variety of the best online slots in their lobbies including Moirai Blaze:-

Enjoyed Moirai Blaze? Here's a handful of similar slots we think you'll like too. These online slots have been chosen based on features and themes similar to Moirai Blaze. You might also want to check out other Iron Dog Studio slots.