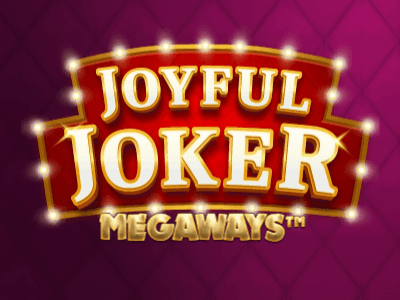 Joyful Joker Megaways is a slightly strange 6-reel, 117,649 ways to win fruit-machine themed slot developed by Microgaming and All41 Studios. This slightly bland-looking 2021 release might actually surprise you, as it's filled a solid collection of bonus features and mechanics such as rolling reels, a Joker Spin wheel of fortune and free spins with an unlimited win multiplier!

“ Joyful Joker certainly did spread some joy, despite being one of the strangest Megaways slots yet! ”

Jump straight into the action and play Joyful Joker Megaways now at the following fully licenced UK slot sites. These slot sites have been thoroughly audited and reviewed by the team here at Slot Gods to ensure they offer an exceptional user experience, are trustworthy, safe, secure, and boast the best selection of online slots in their portfolio including Joyful Joker Megaways...

First and foremost, this odd Megaways slot boasts a Rolling Reels mechanic, which sees game symbols disappear every time a winning combination is formed, allowing for new symbols to fall into place. This essentially sees players win a free spin after each and every spin.

The Joker Spin feature is a lucrative bonus that can kick in at any time during base gameplay. This will see the slowly spinning wheel of fortune to the left of the reels expand into the middle of the game screen.

The wheel will spin and players will be awarded one of four multipliers, either 2x, 3x, 5x or 10x. This win multiplier will climb up by 1x every single time players trigger the rolling reels feature, so you could register some very large wins as a result of this generous randomly triggered feature.

If players manage to land 4 Joker scatter symbols anywhere on the reels then they'll automatically trigger 10 free spins. Every additional scatter symbol that lands after this will see players awarded with another 2 free spins.

Free spins start with a 2x win multiplier that increases by 1x each time the rolling reels mechanic kicks in. The maximum win multiplier is unlimited so there's no upper limit as to how large wins can possibly grow.

Players who aren't in the United Kingdom can activate the game's Buy Feature which will see them instantly trigger the free spins feature. The following options are available:

The Joker Spin feature can kick in at any time during base gameplay and can see players win a random win multiplier on their next spin anywhere between 2x and 10x. This win multiplier will increase by 1x after every rolling reel.

If players manage to land 4 Joker scatters anywhere on the reels then they'll trigger 10 free spins. Free spins start with a 2x win multiplier that increases by 1x each time the rolling reels mechanic kicks in. This multiplier is unlimited.

Players who aren't in the United Kingdom can activate the game's Buy Feature which will see them instantly trigger the free spins feature. It's possible for players to pay up to 150x their stake to trigger free spins with a 5x or 10x win multiplier.

Joyful Joker Megaways is a very unique game in that it's probably the only fruit-machine themed slot that boasts the legendary Megaways mechanic. This 6-reel, 117,649 ways to win title developed by Microgaming and All41 Studios might not be all that to look at, but it has some unique bonus features and mechanics such as rolling reels, jokers spin wheel of fortune, free spins and a buy feature.

We don't really know where to begin with Joyful Joker Megaways, this is without a doubt one of the strangest Megaways slots we've ever come across, it's just a little bit bizarre.

Upon loading the game, players are treated to a cinematic that very much feels like the opening credits for a dodgy 1980s American TV game show. A Court Jester peeps from behind a red curtain before opening it to reveal all of the features this game has to offer, all whilst an upbeat tune plays away in the background... Once you've gotten past that it only gets weirder

This is quite a clean retro fruit machine-themed slot, so you can expect to see all of the classic game symbols that you might have seen way back when. Low paying symbols are cherries, a lemon, an orange a plum, grapes and a watermelon. High paying symbols include a golden horseshoe, a bell, a BAR symbol and the number 7. The game's scatter symbol is of course the Joker himself and the wild is a diamond.

In terms of music, we'd describe the soundtrack as either elevator music, or hold music that you might hear when left hanging on a busy phone line.

Joyful Joker Megaways is laid out like most standard Megaways slots, with an additional row of symbols along the top that span from reel 2 to reel 5, this allows players to take advantage of the additional ways to win.

Players will notice a slowly rotating Joker Spin wheel of fortune to the left of the reels, this can come into play at any time during base gameplay. The bonus wheel will fill the screen and can award players with a multiplier up to 10x.

To the right of the reels are the general game buttons, these include a house that takes people out of the game, nine dots that bring up the game's paytable and settings, a large orange spin button, an autospin button (that allows players to set up to 100 automated spins) and a stake selection button.

This Medium/High volatility Megaways slot has a bog-standard RTP of 96% and a very impressive maximum win potential of 23,000x the player's stake.

We'll level with you, this slot really isn't the prettiest, however, we have to give credit where it's due for the game's generous and genuinely engaging bonus features and mechanics. Who could possibly turn their nose up at a wheel of fortune AND free spins with an unlimited win multiplier? Not us!

Play Joyful Joker Megaways now at the following verified UK slots sites. These slot sites are fully licenced and have been thoroughly vetted and reviewed by us to ensure they offer a great user experience, are trustworthy, secure, and have a wide variety of the best online slots in their lobbies including Joyful Joker Megaways:-