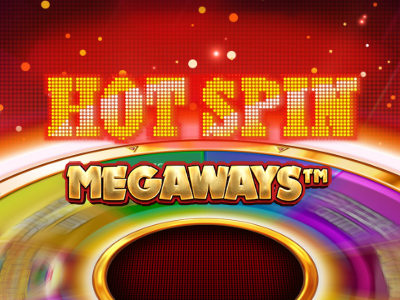 Hot Spin Megaways is a wonderfully designed 6-reel, 117,649 ways to win Megaways slot developed by the genius team at iSoftBet. If you like your games to be full to the brim with amazing bonus features and mechanics then we urge you to look no further as this game has them all! Players can enjoy 10 different game modifiers courtesy of the hot spin wheel AND four different free spin bonuses.

“ Hot Spins Megaways is so full with great features it's hard not to love! ”

Jump straight into the action and play Hot Spin Megaways now at the following fully licenced UK slot sites. These slot sites have been thoroughly audited and reviewed by the team here at Slot Gods to ensure they offer an exceptional user experience, are trustworthy, safe, secure, and boast the best selection of online slots in their portfolio including Hot Spin Megaways...

Naturally, Hot Spin Megaways revolves around the hot spin wheel, a wheel of fortune that plays host to 10 segments, each offering a lucrative modifier that changes the state of the base game.

With so much going on it's quite easy to forget that this is actually a Megaways slot with up to 117,649 ways to win! Any slot that boasts such captivating mechanics that you completely forget about Megaways is one worth talking about.

The hot spin wheel can come into play at any time randomly on any spin, base gameplay or during free spins. 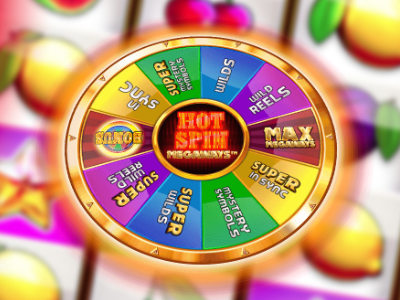 The Hot Spin Wheel is a wheel of fortune that can come into play at any time during base gameplay. This wheel has 10 segments each offering a different modifier that can change the state of the game. 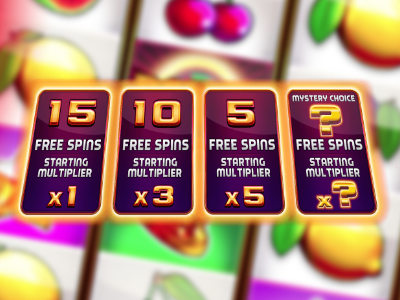 When 4 bonus wheel symbols land anywhere on the reels the Hot Spins Free Spins bonus will trigger. This sees players given a choice of 4 free spin features with a differing amount of free spins and starting multiplier. A new Hot Spin Wheel also comes into play.

Hot Spin Megaways is a truly engaging 6-reel, 117,649 ways to win Megaways slot developed by iSoftBet. This wonderfully creative game revolves around the hot spin wheel that can see one of 10 special modifiers come into play at any time during base gameplay, seriously shaking things up. If that wasn't enough to grab your attention, then the opportunity to trigger four different free spin bonuses should do.

Hot Spin Megaways has a strangely futuristic feel to it for what's essentially a fairly standard-looking fruit-machine style slot. When the game first loads in a robotic female voice says the game's name 'Hot Spin Megaways'... Shortly after chilled dance music kicks in. It's not exactly what we expected, but we'd be lying if we said we weren't impressed that iSoftBet has managed to make what we expected to be a bog-standard slot (if you look ignore the hot spin wheel) sound ultra-modern and well polished.

The game reels are as simple as they come, the symbols featured are your classic fruit machine-style ones, cherries, a lemon, plum, watermelon, bell, star, 7 and a diamond. The game's scatter symbol is the hot spin wheel with the word 'BONUS' written across it.

The most notable thing about Hot Spin Megaways is of course the hot spins wheel. Half of a wheel of fortune covers the left-hand side of the game screen, it slowly rotates throughout base and bonus gameplay, coming into play at random times.

Like most Megaways slots, whenever winning combinations are formed symbols are removed, allowing for new ones to fall into place leading to additional wins.

In terms of navigating the slot, the three key buttons are found on the right-hand side of the game screen, these are autospin, spin and the stake selection tool. Non-UK players will have access to a bonus buy button called 'HOT BET' above these.

This high volatility slot might well have a below-average RTP of 95.98%, however, the fact that Hot Spin Megaways has a maximum win potential of up to 50,000x the player's stake makes up for that (if you're lucky enough to trigger it, or get close).

Even if you don't manage to reach the dizzy heights of 50,000x your stake, randomly triggering any of the modifiers on the hot spin wheel will seriously shake up your gameplay, promising some serious excitement!

Before reviewing this iSoftBet slot I'd never actually tried a Hot Spin game before, and upon first loading into the slot I was unsure whether it would be any good. I was initially concerned that it would be another dull and generic fruit-machine themed slot...

However, after a few spins and witnessing the free spins and hot spin wheel trigger I was genuinely hooked! I'll most certainly be looking to try other Hot Spin titles in the not so distant future as a result of playing this one.

Play Hot Spin Megaways now at the following verified UK slots sites. These slot sites are fully licenced and have been thoroughly vetted and reviewed by us to ensure they offer a great user experience, are trustworthy, secure, and have a wide variety of the best online slots in their lobbies including Hot Spin Megaways:-

Enjoyed Hot Spin Megaways? Here's a handful of similar slots we think you'll like too. These online slots have been chosen based on features and themes similar to Hot Spin Megaways. You might also want to check out other iSoftBet slots.