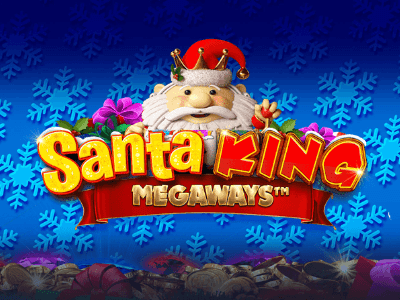 Santa King Megaways is a 6-reel, 116,749 ways to win Megaways slot developed by Inspired Gaming that offers players all the classic Reel King mechanics and bonus features you'll recognise from other games, but with a wonderfully festive Christmas twist! If nothing puts a smile on your face more than that 'ding' sound when one of the reels lights up gold then you'll definitely want to play this slot.

“ A classic Megaways slot with a Christmassy twist! ”

When the Reel King feature is triggered players will get to spin between 1 and 6 single reel, single payline slots that feature three different Christmas presents (red, yellow and blue) and blanks.

If players land any combination of the three Christmas presents and players will win a cash prize equal to their stake. Above these single reel slots there's a trail, if players manage to light up all three positions on the mini slot reel then they'll advance one space along the trail.

If players trigger the Mega King feature then they're automatically guaranteed to receive 8 free spins straight from the get-go, they can also win up to a maximum of 25 free spins as opposed to just 15.

Players can play this mini-game over and again in order to work their way up to a respectable number of free spins, of course, this can all go very wrong if and when players eventually lose.

If players balance is reduced below their current stake (but is greater than zero) then players will be offered the opportunity to wager their remaining balance in an attempt to win a free spin of the reels. The mini-game is the same as the one in the Free Spins Gamble.

During base gameplay between up to 6 game reels will light up yellow and a 'ding' noise will chime! If players manage to light up all six reels then they'll automatically trigger the Reel King feature.

When this feature is triggered players will spin between 1 and 6 single reel slots. If players land winning combinations they'll light up the reels, do this three times and they'll move along a trail towards triggering multiple free spins.

It's possible for players to gamble their winnings after the Reel King feature in favour of picking up free spins. Players much spin a wheel and if it lands in the green they'll receive spins if it lands in the red the cash they've won is lost.

If players balance is reduced below their current stake (but is greater than zero) then players will be offered the opportunity to wager their remaining balance in an attempt to win a free spin of the reels.

Feeling festive? Christmas-themed slot Santa King Megaways is exactly what you're after if you want to play a game that will truly put you in the mood for the holiday season! This 6-reel, 117,649 ways to win Megaways slot boasts cascading reels, lit reels, free spins, a free spins gamble feature, win multipliers and a spin chance wheel.

Like most games that are part of the Reel King series this slot is essentially just a re-skin of Reel King Megaways, which isn't exactly what we'd hoped for... But as fans of the series, we can't grumble too much as it does look good and does the job as a Christmassy instalment.

Symbols are your standard slot/fruit machine iconography. Here players will find a cherry, plum, watermelon, 9, 10, J, K, Q, A and a Santa's sack filled with goodies! The game's wild symbol is the word WILD with a crown and Santa hat atop it. What makes these symbols Christmasy we hear you ask? Well, they're all lightly dusted in snow!

This game is quite unique in the way it plays, if you've played a slot in this series before you'll know what to expect... If you haven't, let us fill you in on the details! The six reels are designed so that the symbols aren't all the same size, a common trait of Megaways slots, there's also an additional row of symbols at the top of the reels covering 2, 3, 4 and 5 this allows for more paylines to come into play.

Players are tasked with not only landing matching symbols across winning paylines, but also turning the game reels gold, triggering a ding noise. If players can light all 6 reels they'll trigger the Reel King feature. Any more cascades beyond that and they could trigger the highly lucrative Super King or Mega King feature.

In terms of navigating and playing the slot, there are three buttons to the right of the reels. From top to bottom we have a stake selection button, a spin button and a game settings button. If players want to set up to a maximum of 100 automated spins then they must hold down the spin botton.

This high volatility slot has a slightly below-average RTP of 95.56% which is saved somewhat by a maximum win potential of 10,000x the player's stake!

Santa King Megaways might well be a re-skin of other Reel King games of old, however, it's still a bloody good game! The soundtrack is quintessential Christmas goodness and the bonus features and mechanics had us on the edge of our seats!

Enjoyed Santa King Megaways? Here's a handful of similar slots we think you'll like too. These online slots have been chosen based on features and themes similar to Santa King Megaways. You might also want to check out other Inspired Entertainment slots.