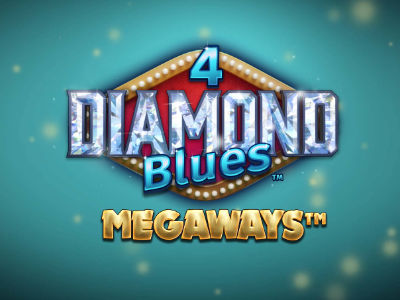 Developed by Buck Stakes Entertainment and Microgaming 4 Diamond Blues Megaways is a 6-reel, 117,649 ways to win Megaways slot that boasts an incredibly lucrative free spin bonus feature that can see players earn up to 18,500x their initial stake thanks to unlimited win multipliers! If you like the idea of mixing classic fruit-machine style gameplay with the iconic Megaways mechanic then you'll most certainly find this vintage title to your liking!

“ If a combo of classic online slots and modern features appeals than try this slot! ”

Aside from being a Megaways slot, there's really only one feature to talk about in 4 Diamond Blues Megaways, and that's the game's free spins bonus feature. When players land 4 Diamond scatter symbols anywhere on the game reels then they're guaranteed to receive a minimum of 12 free spins.

Every additional scatter symbol that lands on the reels after the fourth will award players with an additional 5 free spins.

During free spins an unlimited win multiplier will start a 1x and grows by +1 with every cascading win player's experience. The average win during this feature is 92x the player's stake. 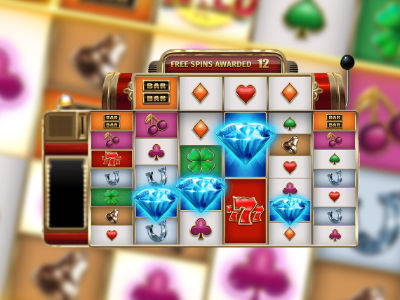 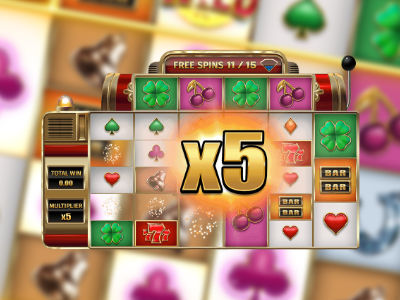 During the free spins bonus feature players have an unlimited win multiplier that increases with every successful cascade. The multiplier will start at 1x and increases by +1.

4 Diamond Blues Megaways is a 6-reel, 117,649 ways to win Megaways slot developed by Buck Stakes Entertainment alongside industry giants Microgaming. This nostalgic slot has just one main bonus feature, but we're not complaining at all because it's an epic free spins bonus that boasts an unlimited win multiplier! Players that opt to spin the reels of this volatile blues-inspired title are in with a chance of winning a very cool 18,500x their stake.

4 Diamond Blues Megaways is a distinctive retro-themed slot that gives off some serious old-school vibes. The game is designed to look like a vintage slot machine you might see in the 1940s or 1950s.

The symbols that appear are all typical of that era, low paying symbols are clubs, diamonds, spades and hearts. High paying symbols include a horseshoe, bell, four-leaf clover, cherries, the BAR symbol and 3 red 7's. The game's special symbols are a poker chip with the word WILD written across it, the scatter symbol is a large shiny blue diamond.

As the name suggests, blues play an integral part in this game's theme... Strangely, the game's soundtrack comes courtesy of 1980s German Rockabilly band The Lennerockers, the song that plays throughout is Suburb Backyard Blues... A catchy blues tune that fits the aesthetic of this slot nicely.

First and foremost, 4 Diamond Blues Megaways boasts 117,649 ways to win thanks to playing host to the iconic Megaways mechanic. There's an additional horizontal bonus reel at the top of the main 6 reels, this adds an additional symbol to reels 2, 3, 4 and 5.

In terms of navigating this slot all of the game's buttons are placed on the right-hand side of the game screen... The only button that can be found elsewhere is the feature buy button, which is built into the left-hand side of the vintage slot machine... However, if you're playing in the United Kingdom, this won't appear due to the fact that feature buys are banned in the United Kingdom.

This high volatility slot has a hell of a lot of potential for those of you looking to rack up some big wins. Not only does have it have a pretty decent RTP of 96.40%, but it can also see players win a maximum of 18,500x their stake, which is a hefty chunk of money!

Solid base game wins are more than achievable, however, it's the free spin feature that really sees payouts grow thanks to the unlimited win multiplier that swiftly grows with every cascade.

If you're after a straightforward fruit machine-themed slot that offers players hundreds of thousands of ways to win courtesy of the Megaways mechanic then look no further.

4 Diamond Blues Megaways is not a game-changing slot and it certainly doesn't reinvent the wheel, but if you're after classic no thrills gameplay with a decent win potential then we don't think you'll find too many better slots.