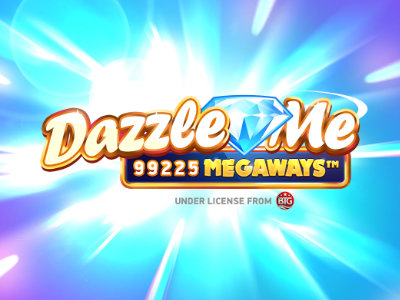 Dazzle Me Megaways is the sequel to 2015 NetEnt slot Dazzle Me. This truly unique 6-reel, 99,225 ways to win Megaways slot sees players spin the reels in the hope of triggering random Dazzling Wild Reels and scatter symbols to win up to 8 free spins that could ultimately see players scoop a cool 50,000x their initial stake!

“ We weren't overly dazzled, but Dazzle Me Megways is still worth trying ”

Jump straight into the action and play Dazzle Me Megaways now at the following fully licenced UK slot sites. These slot sites have been thoroughly audited and reviewed by the team here at Slot Gods to ensure they offer an exceptional user experience, are trustworthy, safe, secure, and boast the best selection of online slots in their portfolio including Dazzle Me Megaways...

Surprisingly, NetEnt's Dazzle Me Megaways isn't actually too complicated of a slot when it comes to features and mechanics, despite looking pretty intimidating at first glance.

First and foremost this colourful game boasts the legendary Megaways mechanic, offering players up to 99,225 ways to win... Secondly, Dazzle Me Megways makes use of the Avalanche mechanic (also known as cascading reels) that sees wining symbols removed from the game, allowing for new ones to fall into place.

In terms of bonus features, players can benefit from Dazzling Wild Reels and Free Spins.

At any point during base gameplay up to 3 reels can turn blue and fill with Dazzling Wild Diamonds (with the only exception being reel 1). This significantly opens up the number of winning paylines leading to some very lucrative winning combinations.

There will be at least one reel that turns into a Dazzling Wild Reel during the free spins feature. This reel will start out with 2 Dazzling Wild Diamonds, every time players register a winning spin an additional diamond is added. 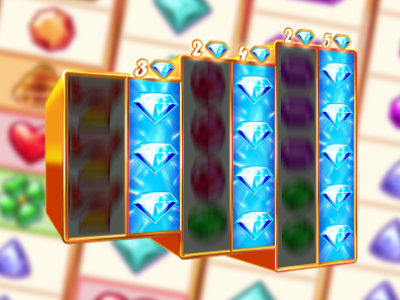 All reels except for the first can turn into a Dazzling Wild Reel at any given moment, this can see players register more wins thanks to the number of winning paylines increasing. 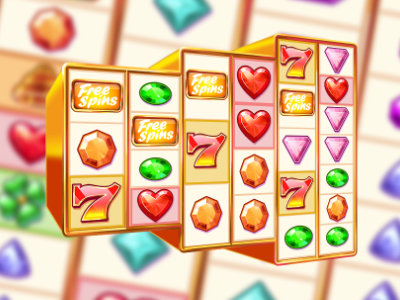 If players land 4 or more free spin symbols then they'll trigger a minimum of 8 free spins with Dazzling Wild Reels in play.

Dazzle Me Megaways is a follow up to NetEnt's popular 2015 release, Dazzle Me. This unusual Megways slot features what is arguably the strangest set of reels we've ever laid eyes upon... We're certainly not complaining though, because this set of reels feature up to 99,225 ways to win and can net players an impressive 50,000x their stake if things go their way during a bonus feature.

Behind the reels is a calming set of soft, slowly blinking multicoloured lights, whilst the golden reels themselves are adorned with generic online slot symbols which are various coloured gems of different shapes and sizes. Higher paying symbols include a four-leaf clover, a heart, a bell and a flaming number 7.

The special symbols in Dazzle Me Megaways are a dazzling wild symbol (which is a shining blue diamond) and an orange block that features the words 'Free Spins'.

It's hard to describe the soundtrack to Dazzle Me Megaways, but if we really had to try, we'd probably go with the music you're forced to listen to when put on hold on the telephone, take from that what you will.

Whenever players register a winning spin the symbols explode into tiny fragments and are removed from the game screen, this allows for new symbols to fall into place (known as an avalanche).

In terms of navigating the slot, if you've ever played a NetEnt game before you'll be right at home. All of the buttons are placed onto an action bar below the game reels.

From left to right there's a hamburger menu that displays the game settings, game rules. Next to that is the info button that displays the paytable followed by stake selection, autospin, play and fast spin buttons.

Like practically every Megaways slot the number of Megaways is displayed in a separate bar above the game reels, in this case directly below the game's logo.

Dazzle Me Megaways is a medium volatility slot with an RTP of 96.10% and a mammoth maximum win potential of 50,000x the player's stake, what's not to love?

We'll be honest, we didn't really think that Dazzle Me Megaways needed to ever happen, as the original game wasn't particularly dazzling in the first place... However, credit where credit's due, this slot isn't at all terrible.

The overall presentation is a bit dull, but the gameplay was pretty enjoyable thanks to the Megaways mechanic, which often goes a long way to improving a game... Especially as the addition has led to wins up to 50,000x the player's stake.

Play Dazzle Me Megaways now at the following verified UK slots sites. These slot sites are fully licenced and have been thoroughly vetted and reviewed by us to ensure they offer a great user experience, are trustworthy, secure, and have a wide variety of the best online slots in their lobbies including Dazzle Me Megaways:-

Enjoyed Dazzle Me Megaways? Here's a handful of similar slots we think you'll like too. These online slots have been chosen based on features and themes similar to Dazzle Me Megaways. You might also want to check out other NetEnt slots.