John Hunter and the Aztec Treasure

John Hunter and the Aztec Treasure is a 5-reel, 7,776 ways to win slot from Pragmatic Play. This game is purely about the free spins bonus round that could potentially see players win up to 40 free spins with a 10x multiplier on top, leading to an impressive 10,804x maximum win.

“ A high-octane Aztec adventure with a fantastic free spins feature ”

If players manage to land between 3 and 5 scatter symbols anywhere on the game reels then they'll automatically trigger the free spins feature that can see them receive up to 25 free spins with multipliers on each and every spin.

Before the free spin round can begin a wheel-of-fortune will spin, this decides how many free spins players will receive. It can be anywhere between 5 free spins and 25 free spins, depending on how many scatters landed on the reels.

During the free spins bonus feature a multiplier value is randomly awarded on every single spin, this can be anywhere between 2x, 3x, 5x, 7x or 10x.

Players can re-trigger free spins by landing 2 or more scatter symbols during the free spins bonus feature, however, rather than having an ever-changing multiplier value, the additional spins will instead feature a fixed multiplier. 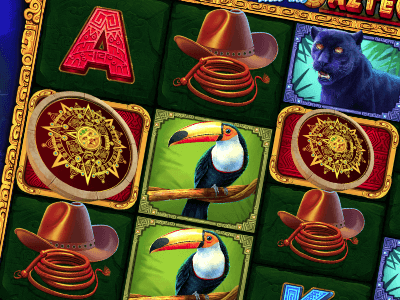 If players manage to land 3 or more scatter symbols anywhere on the reels they'll trigger the free spins feature that can see them receive up to 25 free spins courtesy of a wheel-of-fortune style mini-game. 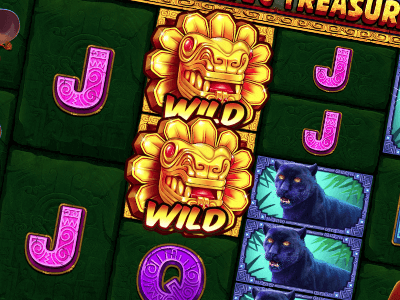 During the game's free spins bonus feature players will always see their winning spins multiplied by either 2x, 3x, 5x, 7x or 10x thanks to an additional spinning row that will allocate one of the aforementioned multipliers.

John Hunter and the Aztec Treasure

John Hunter and the Aztec Treasure makes up part of the iconic John Hunter series developed by Pragmatic Play, this 5-reel, 7,776 ways to win slot boasts a lucrative free spins bonus round that sees all wins multiplied, giving players the opportunity to win a hefty 9,000x their initial stake.

This is your stereotypical Adventure-themed slot that has an Aztec twist, the reels are surrounded by intricate gold trim and are adorned with symbols based on items and animals you'd expect a bold adventurer such as John Hunter to come across on his travels.

Behind the reels is a stunning South American nighttime backdrop featuring an Aztec temple, two flaming statues, trees and a waterfall.

One thing we genuinely enjoyed about this slot was the transitions between game screens upon triggering a free spins bonus round, the animations between each screen were absolutely flawless, having high production values as flames engulfed the reels.

The soundtrack was genuinely pretty decent as well, it wasn't just the same 10 seconds of music on repeat like we often see with many games such as this one, which is genuinely a huge relief as music can make or break a heavily themed slot.

What you see is what you get with John Hunter and the Aztec Treasure, it's set up the same way as most Pragmatic Play slots are, without an action bar along the bottom of the screen, as not to kill the immersion, taking players away from the wonderfully designed slot itself.

Players can access the game information and settings by using one of three small grey buttons in the bottom left-hand corner of the game screen, whilst they can set their stake (anywhere between 0.20 and 20), set up to a total of 100 autospins and of course press the spin button and play the game manually.

This high-volatility slot is a mixed bag for us, on one hand, John Hunter and the Aztec Treasure has a below-average RTP of 94.50%, which is disappointing, but on the other hand, it has a genuinely good maximum win potential, with players able to win up to 10,804x their initial stake.

If we're being completely honest, we didn't expect to enjoy John Hunter and the Aztec Treasure as much as we did, from the outside it looks like just another generic adventure-themed slot featuring an Indiana Jones rip-off, but what we actually found was a delightfully well-designed game with a great free spins feature.

There's no doubt it definitely would have benefited from a few more features, but all in all we enjoyed playing this slot and would recommend playing it.