The Green Lantern slot is part of Playtech’s DC Super Heroes slot series. This time the slot is based on the 2011 blockbuster movie starring Ryan Reynolds as Hal Jordan (Green Lantern). The game is jam-packed with bonus extras, including four progressive jackpot prizes. The 5-reel slot offers 243 paylines and a 94.95% RTP. You can spin the reels from just £0.40 per spin to £2,000 per spin, making it a suitable choice for all budgets.

“ A showpiece of awesome features and enthralling visuals. ”

Playtech’s Green Lantern slot continues the feature-full theme of the DC Super Heroes series. This game is not short of in-game action with some seriously cool bonus rounds to trigger. The visually immersive game packs in four bonus games with 3 high paying free spins feature with wilds and multipliers in play. Let’s take a look at what bonus features you can expect to find in the Green Lantern slot. 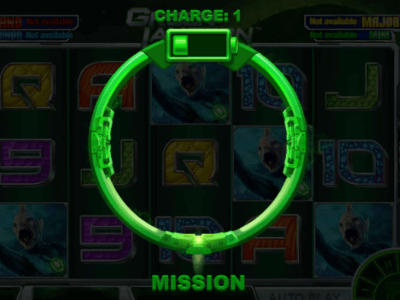 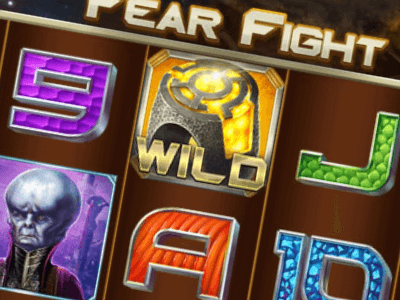 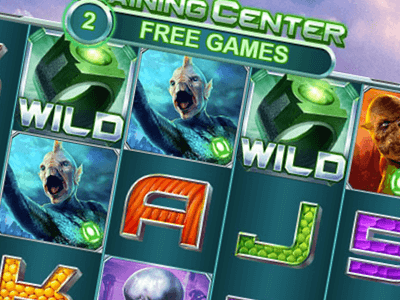 This feature gets you 10 free spins with extra wilds. The higher the charge, the more wilds you will benefit from. Charge 1 will give you grenade wilds whilst charge 2 will give you missile wilds and charge 3 gives you punch wilds. 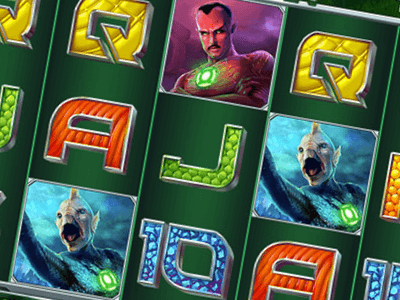 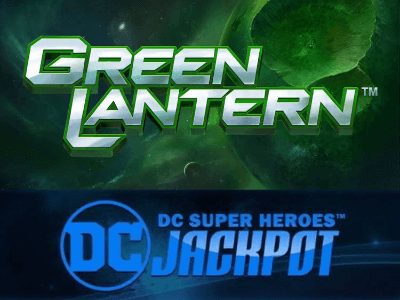 Any spin can randomly give you access to the jackpot game where you pick from 20 jackpot icons to win 1 of 4 progressive jackpots (Mini, Minor, Major and Grand).

Playtech’s DC Super Heroes jackpot slot series is back with Green Lantern. This game is based on the 2011 movie starring Ryan Reynolds and Blake Lively. The game is set in the futuristic space world where heroes and monsters collide. The comic-book themed slot brings the movie’s action to the reels with some impressive graphics and plenty of thrilling features. The game features multipliers, collapsing reels, extra wilds, stacked wilds, free spins, a bonus feature, and four progressive jackpots that can deliver a life-changing win.

Set across 5 reels and 243 paylines, the Green Lantern is uncomplicated to play, despite all the bonus action and collapsing reels. Any winning combos hit in the base game are removed and replaced for a set of new symbols, increasing the payout potential on a single spin.

Green Lantern is a visual treat with plenty of animation and immersive extras that make for an enthralling slot experience.

If you like some visual entertainment while you razz up the reels, then you will enjoy the Green Lantern slot. The game is set in an intergalactic world where asteroids are flying around the reels. The background location will change as you play through the different features. The Green Lantern himself is there, next to the reels and ready to create and celebrate winning lines.

The reels are encased in some sort of green lightning produced by the Green Lantern. On the reels, you will see the characters from the movie, including the Green Lantern, Sinestro and Kilowog. When you hit a winning line the high paying symbols will play a clip from the movie. The bonus extras take the animation up a few notches and deliver top-notch bonus play.

The visual show is backed with an intense soundtrack that has you sitting on the edge of your seat.

Green Lantern is played using cascading reels, this removes any winning combinations and makes way for additional symbols to land and create new winning lines. Besides that, there is the charge level on the bottom right corner. This is increased every time you hit consecutive collapsing wins and will eventually trigger one of the bonus features.

The game displays the progressive jackpot amounts above the reels and the control panel sits below. The spin button is big and green and is placed in the bottom right corner. Next to that, you can set turbo spins and autoplay. The controls also feature the bet amount which can be set from £0.40 to a whopping £2,000 per spin. There is also an information icon that provides a breakdown of high paying symbols and bonus rounds.

Green Lantern is a medium variance game with 243-ways, collapsing reels and frequent wins. However, the win potential increases exponentially when you’re in one of the bonus rounds. The bonus-packed slot is thriving with high paying symbols with extra wilds, dynamic multipliers, stacking wilds and more.

The four progressive jackpots steal the show with the grand jackpot starting at £200,000 and is currently sitting at over £700,000.

Playtech’s DC Super Hero slot series has seen some feature-full and high paying slots, but when it comes to the visual impact, Green Lantern wins. This visual masterpiece fully engages you with its brilliant animation and indulging in-game features. Although the movie was a bit of a flop, you can expect a better performance through the slot game. You don’t need to be a comic-book fan to enjoy this one, Green Lantern brings the right elements for a fun and rip-roaring playing experience.

Play Green Lantern now at the following verified online slot sites. These slot sites have been thoroughly audited and reviewed by us to ensure they offer an exceptional user experience, are trustworthy, safe, secure, and boast the best variation of online slots in their portfolio including Green Lantern:-

Enjoyed Green Lantern? Here's a handful of similar slots we think you'll like too. These online slots have been chosen based on features and themes similar to Green Lantern. You might also want to check out other Playtech slots.