Great Rhino Megaways is an animal themed 6-reel, 200,704 ways to win slot from Pragmatic Play that can see players win a massive 20,000x their stake if luck is on their side! This game's main bonus feature is a free spins round that offers up to 15 spins with a progressive unlimited multiplier on top.

“ Another classic online slot improved immeasurably by the Megaways mechanic ”

When players land 4 or more scatter symbols on the reels they'll trigger a free spins round, however, that's not all. Players have the opportunity to pick one of three options that dictate how many spins they receive and whether or not a multiplier is involved.

It's also worth noting that if players hit 3 scatter symbols during any of the above free spin rounds then they'll automatically trigger an additional 5 free spins to make the most of, which is what can see players win that 20,000x max win. 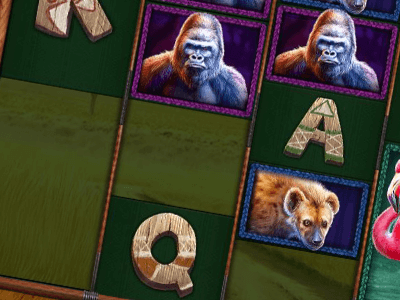 Whenever players trigger a winning spin the winning symbols are removed from the reels. This causes all the symbols above to fall down and fill the vacant spots. New ones fall in, potentially creating another winning combination. 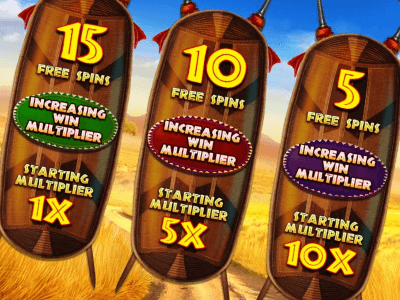 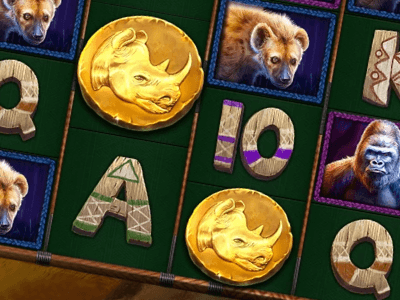 Players can opt to select the Ante Bet option when spinning the reels, this allows the game to behave differently, giving players a greater chance of winning larger prizes by paying slightly more on each and every spin.

Great Rhino Megaways is the very first Megaways slot that Pragmatic Play tried their hand at developing in 2020. This fantastic animal-themed slot features 6-reels and a massive 200,704 ways to win, more than your average Megaways title, which is something we always like to see.

It's hard not to see why this title has proven so successful with players since its release, as it, of course, features the megaways mechanic, cascading reels, wild symbols, scatter symbols, free spins and everyone's favourite, unlimited win multipliers!

Great Rhino Megaways is a beautifully designed slot that's vibrant and filled with colour. The 6 reels are tied together by four traditional tribal spears, whilst behind the reels is a vast African savannah that sees a whole host of wild animals grazing.

Low paying symbols in Great Rhino Megaways are your standard royal suit 10, J, Q, K, A. As you would expect the high paying symbols are animal-themed, these are flamingo, hyena, crocodile, gorilla and cheetah. The game's special wild symbol is, of course, a huge rhinoceros with a golden horn!

Naturally, as a Megaways slot you'll notice that this 6-reel game has an additional row covering reels 2, 3, 4 and 5 which is what helps players take advantage of those additional paylines they love so much. There's also a box in the top right-hand corner of the game screen that displays the current number of active paylines.

As is the case with all Pragmatic Play slots, navigating the game is incredibly simple! Players can decrease and increase their bet value using - and + buttons either side of the spin button on the far right-hand side of the game screen, below that they can set up to 100 automated spins.

Players can access game settings and the paytable via a large info button and a hamburger menu on the far left-hand side of the game screen.

The fairly high volatility slot has an agreeable RTP of 96.50% which is around (if not slightly above) the industry average, so there are absolutely no complaints from us there. In terms of winning potential, players can win a maximum of 20,000x their initial stake, which is impressive and no doubt helped by those additional paylines players can take advantage of.

Great Rhino Megaways is a fantastic release, not only is it filled with some truly wonderful bonus features and mechanics, but it really packs a punch with 200,704 ways to win and a maximum top win of 20,000x the player's initial stake.