Blueprint Gaming's Gorilla Gold Megaways is HUGE! This gargantuan slot is played on not one, not two, not three... But FOUR sets of game reels. With 24 reels and 470 paylines active at all times during the base game, you're guaranteed to have a LOT of fun. If that wasn't enough players can unlock up to 470,596 ways to win and enjoy up to 35 free spins or 30 super spins leading to some very big wins.

First and foremost this is a Megaways slot (if you hadn’t already realised), meaning that there are a significantly larger number of paylines active in comparison to most games.

Secondly, you should always be keeping an eye out for the game’s Mystery Symbol which can land at any time on the reels randomly change into any symbol (except scatters), leading to an unexpected win. The real money of course is in the game’s free spins round.

If players land 4 or more scatter symbols on any set of reels then they’ll automatically trigger the Gorilla Gold Bonus which is a free spins round. The number of scatter symbols that land dictates the amount of free spins players will receive:

Before entering the bonus round players can choose to gamble their spins on a special wheel of fortune style game for the chance to win additional free spins or convert their ordinary free spins into super spins.

Just like the base game, Super Spins are incredibly chaotic! Players begin with just one slot active (as they would in the standard free spins game), but whenever monkey tokens are collected the 2nd, 3rd and 4th slots are unlocked. Whenever a new slot is unlocked there’s also an additional 5 free spins waiting for you!

The most interesting feature in Gorilla Gold Megaways is the Bonus Guarantee, something we can genuinely say we’ve never seen before. If at the end of a Super Spins bonus round your winnings are below 100x less than your original stake then 5 additional free spins are awarded in an attempt to boost your winnings. 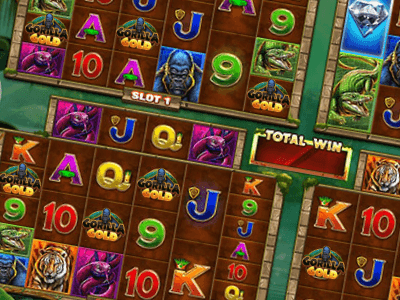 Mystery Symbols can land on the reels at any time and randomly change into any other symbol except scatters. 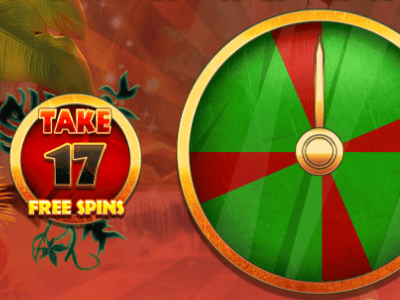 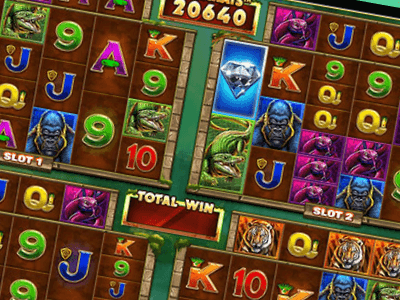 There’s no other word we can use to describe Gorilla Gold Megaways other than HUGE!

Not only does this fun-filled jungle themed online slot come with an incredibly generous 470,569 ways to win (putting this amongst the largest in the Megaways series), but it’s also played across not one, not two, not three… But FOUR game screens on 24 reels.

This kind of action is pretty much unprecedented, and whilst it can all be a little bit overwhelming at first this ‘Power 4 Slot’ is immensely exciting once you get into the swing of things and you’re fully acquainted with how things work.

We can’t talk about the design without first addressing the fact that this game has been split into four! It’s a bit of an assault on the senses, but it’s great fun. The reels themselves are made from what look like bamboo with vines growing around them… Behind the reels you’ll see nothing but dense jungle foliage.

As far as game symbols go you’ll find that low paying symbols are your classic 10, J, Q, K, A whilst the higher paying symbols all hail from the animal world. These are Snakes, Crocodiles, Tigers and of course Gorillas!

One thing we found extremely surprising was the music. With some of the games we play, we often find we have to immediately hit the mute button as it’s just too much to deal with, but with Gorilla Gold Megaways the gentle tribal-style music fits the slot perfectly. There’s a nice ambience and it greatly boosted our gameplay.

Gorilla Golds Megways is a Power 4 Slot meaning that there are 4 individual game windows with their own set of reels active during each and every spin, meaning that there's not only 470,596 ways to win, but also way more opportunities to win big.

All of the buttons players need are found on the far right of the game screen. Here there’s the spin button, the turbo button (if you’re playing outside of the United Kingdom) and the autoplay button which allows players to set a number of automated spins.

Not only does Gorilla Gold have a wonderful RTP of 97%, putting it amongst the top slots with a high return to player, but it also offers everyone that plays it the opportunity to win 20,000x their initial stake which is absolutely mouthwatering.

This high-volatility slot can be very generous if you’ve got the bankroll and patience, you’d be a fool not to give it a spin if you’re a fan of high stakes, high volatility gameplay!

Gorilla Gold Megaways certainly isn’t the first online slot to introduce players to four game screens at once, but this is arguably one of the most impressive slots to utilise this feature.

Once we really got into it and began to understand everything that was going on around us we genuinely found ourselves having a lot of fun whilst playing Gorilla Gold Megaways.

This game’s immense win potential constantly had us on the edge of our seats waiting for big wins to drop, and when we got into the free spins and super spins rounds we really liked what we saw… If you’re after exciting, flashy bonuses then this is the slot for you for sure.

Gorilla Gold Megaways looks, sounds and plays great. The four reels gimmick isn’t for everyone and it can be a little too much, but ultimately it’s executed well.