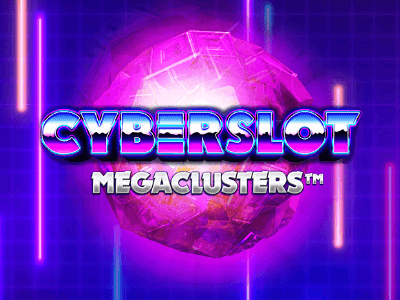 Cyberslot Megaclusters is an innovative cluster pays slot developed by Big Time Gaming played on a 3x3 grid that sees symbols explode into 9 smaller symbols whenever a winning spin is triggered. If that wasn't enough excitement for you, this space-themed slot also features three different types of wild and a very generous free spin feature that boasts increasing multipliers!

“ Slightly intimidating, but a LOT of fun once you get the hang of things! ”

Jump straight into the action and play Cyberslot Megaclusters now at the following fully licenced UK slot sites. These slot sites have been thoroughly audited and reviewed by the team here at Slot Gods to ensure they offer an exceptional user experience, are trustworthy, safe, secure, and boast the best selection of online slots in their portfolio including Cyberslot Megaclusters...

First and foremost we think we should probably explain what a Megaclusters slot actually is! In the words of Big Time Gaming, a Megaclusters game is a symbol matching game where winning symbols split and react.

When wins occur featuring the smaller symbols then they're removed from the game and new symbols drop in from the top of the screen. All reactions continue indefinitely until there are no more winning combinations available.

Each spin of the reels will see a single wild symbol appear randomly over one of the symbols. There are three types of wild symbol that players can receive on each spin, these are as follows:

Each time a Roaming Wild forms part of a winning reaction a win multiplier comes into play. This will increase by 1x each time another win is formed.

The free spins are played on a 9x9 grid and any multipliers that were activated in the base game are carried over to the free spins! During this bonus, if golden roaming wilds reach a multiplier of 10x players will receive another 2 free spins.

When a winning spin occurs the symbol explodes and turns into 9 smaller symbols (or 4 during the free spins bonus). When wins occur featuring the smaller symbols they're removed from the game and new symbols drop in.

Each spin will see a wild symbol appear randomly over one of the symbols, these wilds can be a regular wild, a roaming wild or a rainbow roaming wild depending on whether players are playing the base game or a bonus.

Innovative studio Big Time Gaming is back at it again with another amazing new slot that utilises a special Megaclusters game engine. This highly volatile space-themed slot starts out on a 3x3 grid and one symbol is picked at random on each spin to display 9 smaller symbols (known as Megaclusters), wins are formed when players land a cluster of 5 or more matching symbols.

We mean it when we say that if you're after a truly exciting slot with truly unique mechanics then look no further! This game sees every winning symbol break down into 9 smaller symbols opening up more paylines, roaming wilds also make their way around the reels and then of course there are plenty of free spins to be won!

This is a very modern and futuristic looking slot. The game grid is set on what looks like a large three-dimensional cube with has colourful laser beams flying past it in the background. 8 of the 9 squares on the grid will play host to bright glowing symbols, that we can only assume are chunks of asteroids or planets. When a winning combination is formed these symbols will dramatically explode and the symbols will get significantly smaller.

It's pretty clear from the get-go that this no ordinary online slot game. As mentioned earlier in the review, one section of the 3x3 game grid features 9 symbols instead of just one. When a winning spin is registered featuring one of the large standard symbols it will automatically explode and break down into 9 symbols. The largest possible game grid is 9x9 with 81 symbols.

In terms of navigating the slot itself, everything matches what you'd find in any standard Big Time Gaming slot, all of the buttons are clustered together (pun intended) on the right-hand side of the game reels. Players can change their stake between 0.20 and 10.00, access the paytable and game settings via a hamburger menu, set up to 100 automated spins and press play.

This high volatility slot has the potential to be pretty darn generous if you have the bankroll to sustain long-term gameplay. Cyberslot Megaclusters has an RTP of 96.28% and a maximum win potential of 28,200x the player's stake.

This innovative game is pretty impressive and promises some real action if you manage to rack up consecutive winning spins! If you're new to online slot games then it might be one to avoid, as it is quite intimidating... However, after a while playing you should have managed to get your head around the gameplay. All in all, we'd recommend giving this slot a spin, it's a lot of fun... And who can say no to a game that offers players the chance to win 28,200x their stake?

Play Cyberslot Megaclusters now at the following verified UK slots sites. These slot sites are fully licenced and have been thoroughly vetted and reviewed by us to ensure they offer a great user experience, are trustworthy, secure, and have a wide variety of the best online slots in their lobbies including Cyberslot Megaclusters:-