Playtech has produced another old school Batman slot with Batman & Batgirl Bonanza. Set on the classic 1960 TV series starring Adam West as Batman. The game is played on 5 reels with 60 paylines and two rewarding bonus rounds. The fun, friendly and feature-full slot comes with four randomly triggered progressive jackpots that can deliver a life-changing win.

“ A fun-loving and feature-fantastic slot game! ”

The Batman & Batgirl Bonanza continues the feature-heavy form of Playtech’s DC Super Heroes slot series. This slot title upholds the fun and friendly action from the TV show and gives it a rewarding twist.

You will enjoy some nice rewards from the Batman Team-Up Free Games feature or if you’re truly lucky, you can trigger the jackpot feature where you’re guaranteed to win at least one of the four prizes. Let’s take a look at what features this slot offers. 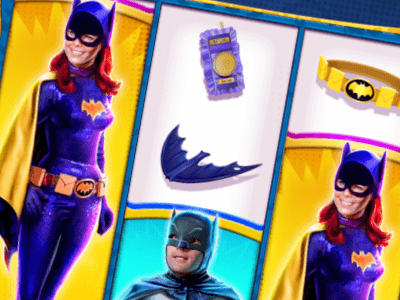 Match the Batgirl symbol on columns 1 and 2 as this will trigger the Batgirl Locked Re-spins. You get 5 re-spins with the symbols on the first 2 reels locking for the re-spins. You can benefit from Co-Op and wild symbols as the matching symbols which will increase the win potential. 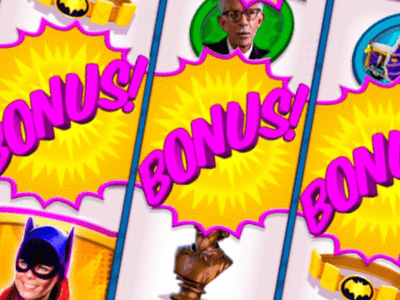 This feature is triggered when the Bonus scatter symbol appears on reels 3, 4 and 5. You then need to match superheroes before the feature offers 12, 17 or 25 free spins. To increase your wins, the first 2 reels merge to form 1 reel filled with giant 2x2 symbols. 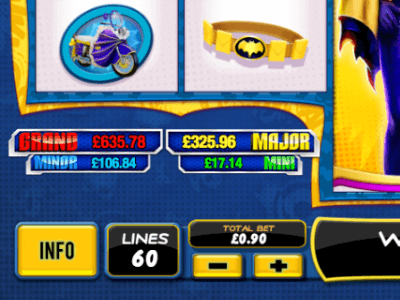 You can trigger one of four progressive jackpot prizes at random. If you trigger the jackpot, it will open a mini game that guarantees one of the 4 jackpots. You will pick from 20 symbols, and if you get enough matching, one of the four jackpot triggers.

Playtech’s DC Super Heroes jackpot slot series is back with another classic Batman-themed game. This time Batman has partnered up with Batgirl to deliver some kick-ass wins. The slot is set around the hilariously entertaining TV show from the sixties, starring Adam West as the caped crusader and Yvonne Craig as Batgirl. The slot features the same retro appearance as the TV series, bringing all the classic gadgets and characters to the reels.

The 5-reel slot features some valiant bonus extras where you can increase your real money balance. The game also has four progressive jackpot prizes that are randomly triggered on any spin, once you trigger the jackpot feature you are guaranteed to win one of the jackpots. As you unlock features and hit nice payouts you will enjoy some cool animations and snippets from the original TV show. Golly Batman!

Batman & Batgirl Bonanza is an uncomplicated slot title with familiar features. The slot game is full of colour and provides a friendly playing environment. You don’t need to be a Batman fan to enjoy this entertaining jackpot slot.

On the reels you have Batman, Batgirl and Robin as the high paying symbols, then you have some classic memorabilia from the TV show, such as the Batgirl bike, Batman’s utility belt and more classic trinkets. As you play you will enjoy plenty of animation complimented with some fantastic sound effects that take you back to the TV series. The game will also play clips from the original TV series when you hit a winning combo.

Staying true to the retro feel of the classic TV show, the game brings old school visuals with new school payouts. The game oozes amusement through its merry appearance and vivid graphics. The slot has a friendly vibe that is a joy to spin the reels on.

Batman & Batgirl Bonanza has a different set up to most slots. It plays on 5 reels but reel 1 and 2 have been condensed into 2 rows, rather than the 4 rows that the other reels feature. This set up increases the win potential and when you are playing the bonus game the symbols on reel 1 and 2 lands as a 2x2 super symbol cluster for better payouts.

Above the reels sits the four jackpot amounts and below the reels is the usual DC slot series control panel. The spin button is on the bottom right with turbo mode and autoplay controls next to that. You can also set the bet amount from £0.30 to £30, making one of the lower budget slots from the DC Super Heroes series. If you want to find out more about the bonus symbols and features, then you can hit the info button for more information.

Batman & Batgirl Bonanza is a medium to high variance slot with a 96% return to player percentage. The Batman symbol is the highest paying and can deliver up to 2,000x your stake for 5 on a payline. There are some good rewards to be had in the bonus rounds but it’s the progressive jackpot prizes that steal the show. The four progressive jackpots are triggered at random and can offer life-changing wins well into the hundreds of thousands.

Like the other games in Playtech’s DC comics series, the Batman & Batgirl Bonanza is highly entertaining with a good mix of extras. The Batgirl Locked Re-Spins feature is a lot of fun and can produce some tidy payouts. The game’s appearance kicks up the thrill levels a few notches and makes for some very enticing gameplay. This slot doesn’t take itself too seriously and creates a casual and pleasurable atmosphere. You don’t have to be a comic-book fan to appreciate this slot, it has all the elements any good slot should have.