Age of the Gods: King of the Underworld

Age of the Gods King of the Underworld is a 5-reel, 20 payline slot from Playtech that might not offer players free spins, but does have two appealing bonus features for players to get stuck into: The Gates of Hell feature and the Thread of Fate bonus feature; both pick and click mini-games.

“ One of the most unique Age of the Gods slots. Fun, but lacks key features. ”

Play Age of the Gods: King of the Underworld

Age of the Gods: King of the Underworld Features

When players manage to land 3 Cerberus symbols on any given payline during the base game they'll automatically trigger a pick and click mini-game that sees players tasked with continuously opening doors to the underworld.

Each time one of the doors is opened and a trapped soul escapes a prize is won. the bonus round will end when players open a door to reveal the Cerberus OR following their sixth successful selection. All of the bonus round wins are multiplied by the total number of paylines used to initiate the bonus.

Secondly, we have the Thread of Fate feature, this is triggered when players manage to land 3 Fate Sisters symbols on any active payline. Here players will be made to play a pick and click mini-game in which they choose thread spindles. If the correct one has been picked Atropos will cut it, if the wrong one has been picked it will not cut and the bonus feature ends. All of the bonus round wins are multiplied by the total number of paylines used to initiate the bonus. 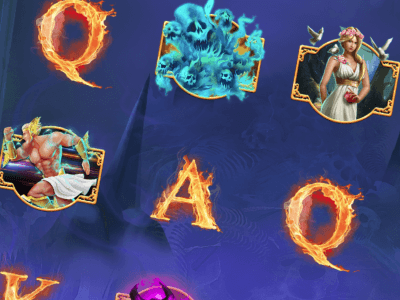 Landing 3 Cerberus symbols on any payline will trigger a pick and click mini-game in which players must continuously open one of three doors to the underworld, each time a soul is released a prize is won. This ends when the Cerberus is discovered. 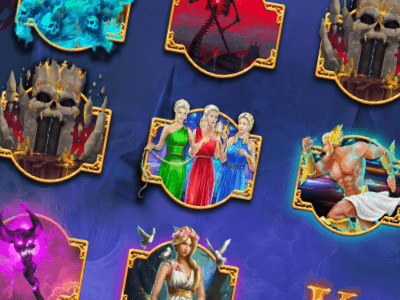 If players land 3 Fate Sisters symbols then they'll trigger a pick and click mini-game in which players must click spindles one by one to reveal prizes. Atropos will cut thread each time players pick a winning spindle, When the thread does not cut the feature ends.

Age of the Gods King of the Underworld

Age of the Gods King of the Underworld is a 5-reel, 20 payline Mythical-themed slot from developers Playtech that sees players chase after prizes as large as 10,000x their initial stake. This healthy sum of money can be won by way of two bonus features, the Gates of Hell feature and the Thread of Fate feature.

King of the Underworld is absolutely nothing like any other Age of the Gods slots, there are no reels whatsoever! 15 symbols float precariously above what can only be described as a true pit of despair. Behind the symbols is a cavern situated in the depths of hell, piles of skulls and bones sit amongst jagged rocks, chains and stone pillars.

The symbols are just as hellish! Low paying ones are your standard Q, K, A, however, they're on fire! High paying symbols include a pile of phantom skulls, a murky coin, an evil-looking staff, a heroic warrior. an evil undead woman, a beautiful Goddess and the Tartarus (the abyss that is used as a dungeon of torment for the wicked and as the prison for the Titans).

The highest paying symbol, the Tartarus also acts as a wild, whilst a skeleton wielding a weapon acts as the scatter symbol. Both the Cerberus symbol (a three-headed dog) and the Fate Sisters symbol (the three sisters from Age of the Gods Fate Sisters) will trigger bonus rounds.

In terms of sound, King of the Underworld is actually pretty impressive, there's a high-octane orchestral score playing at all times, which helps create an air of suspense and excitement. It's actually better than most Age of the Gods soundtracks.

This slot shares similarities with Age of the Gods Athena vs Ares in the sense that it's laid out completely different to any other game in the series.

rather than utilising an action bar below the reels, players must click an arrow on the left-hand side of the screen to open an expanding menu. This expanding menu allows players to change the number of paylines they're playing on (between 1 and 20), their stake (between 0.01 and 10.00) and set up to 100 automated spins. On the right-hand side of the game reels there's a play button, and that's all!

It has an RTP of 96.02% and a maximum potential win of 10,000x the player's initial stake, it's a shame not to see the jackpot this series is so famous for included, but it's still nice to see this game pays out well.

We're in two minds about Age of the Gods King of the Underworld, on one hand, it's hard to get behind a slot that's missing the iconic progressive jackpot, often AOTG slots that don't have the jackpot will have another to make up for it, but not this one. On the other hand, this is a unique title that boasts some interesting bonus features and has a decent win potential.

Ultimately, it's another middle of the road Age of the Gods slot for us, but worth playing if you're curious! However, there probably are some better options out there if you're not fully convinced by this one.

Play Age of the Gods: King of the Underworld