Age of the Gods: Athena vs Ares

Age of the Gods Athena vs Ares is a 5-reel, 25 payline slot that's all about the Exploding Reels feature. Whenever a winning combination is formed the symbols will explode and new symbols will tumble from above filling the empty space, which can continue indefinitely. Players also go head-to-head in an epic battle with one of three opponents in a bonus game to win a cash prize.

“ Above average winning potential with distinct bonus features and mechanics ”

Play Age of the Gods: Athena vs Ares

Jump straight into the action and play Age of the Gods: Athena vs Ares now at the following fully licenced UK slot sites. These slot sites have been thoroughly audited and reviewed by the team here at Slot Gods to ensure they offer an exceptional user experience, are trustworthy, safe, secure, and boast the best selection of online slots in their portfolio including Age of the Gods: Athena vs Ares...

Age of the Gods: Athena vs Ares Features

Age of the Gods Athena vs Ares features two bonus features and mechanics players need to be aware of whilst spinning the reels. Firstly, we have exploding reels, the sees any winning symbols explode, being removed from the reels and allowing for new ones to fall into place, potentially forming new winning paylines.

Secondly, we have the Athena vs Ares bonus. Whenever players land three Athena vs Ares symbols on reels 1, 3 and 5 then they'll trigger a mini-game that sees players choose one of three mythical gods, Athena, Ares and Medusa. The more battles your chosen gods win, the higher the win multiplier is applied to your initial stake. 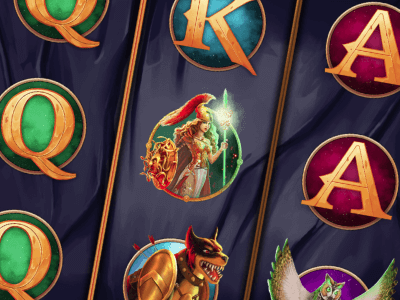 Whenever a winning spin takes place the symbols that made up that winning payline explode and are removed from the reels, new ones will then fall into place potentially forming new winning paylines. 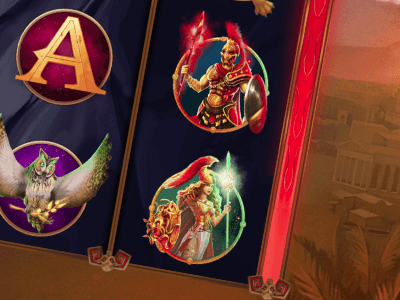 If players land three Athena vs Ares symbols on reels 1, 3 and 5 they'll activate the bonus feature that sees players select a character who will fight between 1 and 3 opponents. The more they beat, the higher the win multiplier.

Age of the Gods Athena vs Ares

Age of the Gods Athena vs Ares is a 5-reel, 25 payline slot developed by Playtech that was released alongside Age of the Gods Bingo back in 2018. For some strange reason, unknown to us, this slot in the Age of the Gods series is genuinely quite hard to come by, we did find that it mainly features on bingo-specific sites.

This slot features an exploding reel feature as well as an exciting Athena vs Ares bonus feature that sees players select a character to fight for them against a handful of opponents.

Age of the Gods Athena vs Ares is genuinely well designed, with high paying symbols all being intricately drawn with great care, right down the most minute of details. There's just something about this slot that stands out to us, and we think it might be down to the fact that Athena vs Ares follows a different art style to all of the other releases in the Age of the Gods series.

Low paying symbols are three stylised royal card suits Q, K, A, a vicious armoured dog, an owl and Ares' helmet. High paying symbols are a golden coin bearing Medusa's face (at least we think it's her), Ares himself, the God of War and Athena, the Goddess of War.

In terms of music, players are treated to a tense orchestral soundtrack that builds real tension and drama as players spin the reels in the hope of triggering a lucrative bonus feature.

This slot isn't laid out and played like any other Age of the Gods slot in terms of general gameplay, rather than utilising an action bar below the reels, players must click an arrow on the left-hand side of the screen to open an expanding menu. This expanding menu allows players to change the number of paylines they're playing on (between 1 and 25), their stake (between 0.01 and 10) and set up to 100 automated spins.

On the right-hand side of the game reels there's a play button, and that's it. We'll admit it was a little bit jarring at first, we're used to seeing things set out a certain way when it comes to Age of the Gods slots, there's usually plenty of consistency, we found this quite odd, to say the least.

We're sad to say that this slot has an absolutely diabolical RTP of 92.03%, which is low even for a progressive jackpot slot... But wait, this ISN'T a progressive jackpot slot. Athena vs Ares is not part of the Age of the Gods Progressive Jackpot network, so why the RTP is so laughably low, we don't know. The maximum win certainly goes some way to make up for the poor RTP, with players able to win a total of 15,000x their initial stake.

We'll be honest, we're not totally convinced with Age of the Gods Athena vs Ares, yes it has a great maximum win, but that's about it. This slot is lacking in the bonus feature and RTP department, and for those reasons alone we find it hard to completely get behind this game.

Play Age of the Gods: Athena vs Ares