Age of the Gods: Fate Sisters

Age of the Gods Fate Sisters is a 5-reel, 25 payline slot developed by Playtech that's notable for the Fates' Portal features that sees sisters Lachesis, Clotho and Atropos gift players free spins with modifiers such as locking wilds, random wilds and dynamic multipliers. The Sisters' Gift feature also promises big wins by way of re-spins. This slot also features the Age of the Gods progressive jackpot.

“ Not too many classic AOTG slots are as feature-rich as this one, give it a spin! ”

Jump straight into the action and play Age of the Gods: Fate Sisters now at the following fully licenced UK slot sites. These slot sites have been thoroughly audited and reviewed by the team here at Slot Gods to ensure they offer an exceptional user experience, are trustworthy, safe, secure, and boast the best selection of online slots in their portfolio including Age of the Gods: Fate Sisters...

If players land 3 scatter symbols on the reels then they'll trigger the Fate's Portal free games bonus. This will see players afforded the opportunity to choose one of three free game modes that are as follows:

This slot also benefits from the Sisters' Gift feature. If Lachesis, Clotho or Atropos appear on reels 1, 3 and 5 respectively then players will receive a single re-spin that sees all 3 sisters locked in their positions for the respin. Lachesis, Clotho and Atropos will all act as scatter symbols.

Naturally, Age of the Gods Fate Sisters also comes with the iconic Age of the Gods Progressive Jackpot included that can see players win one of four lucrative progressive jackpots at any time, on any spin of the reels. 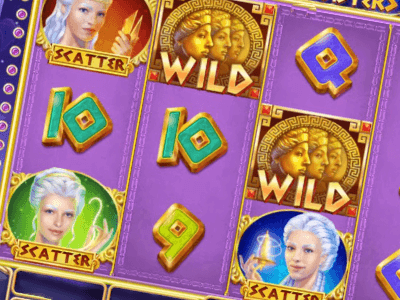 If players land 3 scatter symbols on the reels then they'll trigger the Fate's Portal free games bonus. This will see players afforded the opportunity to choose one of three free game modes with different modifiers. 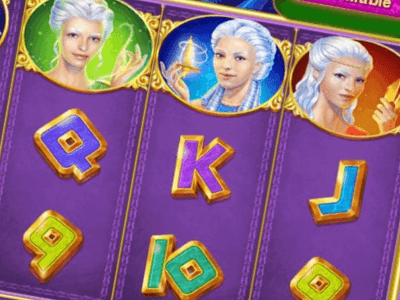 If the three sisters appear in reels 1, 3 and 5 in a specific order (Lachesis, Clotho then Atropos) then players will receive a respin in which all of the sisters are locked in place, acting as scatter symbols. 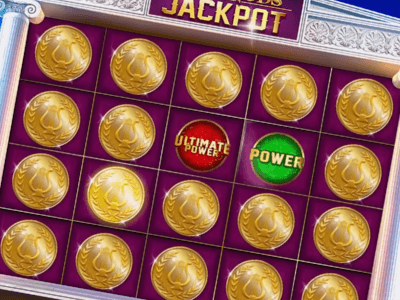 Players can trigger a pick and click mini-game at any time, using any stake, that will see players made to pick three matching coins. Eventually, they'll trigger one of the four progressive jackpots.

Age of the Gods Fate Sisters

Age of the Gods Fate Sisters is a 5-reel, 25 payline mythical-themed slot developed by Playtech that's filled to the brim with bonus features and mechanics that are all based around three generous sisters Lachesis, Clotho and Atropo. If the thought of up to 15 free spins with modifiers wasn't enough, it's worth remembering this game is comes bundled with the legendary Age of the Gods Progressive Jackpot.

Like many of the early Age of the Gods slots, this title doesn't exactly look spectacular when compared with more modern slots, but Playtech have stuck to their guns and this game is strongly themed, and we can always get behind a strongly themed slot.

Behind the reels is a temple that's softly lit by purple lighting, the reels themselves are covered in gold trim, there's even more purple draped behind the symbols. It's all very elegant.

Low paying symbols are your standard 9, 10, J, Q, K, A whilst high paying symbols are thread, shears, Atropos, Clotho and Lachesis. Special symbols see a blue portal appear as the game's scatter and a golden carving of all three Fate Sisters as the wild.

The music is a little bit softer than you'd usually expect to find in an Age of the Gods slot, which fits perfectly with the feminine vibe this slot gives off. A harp is plucked alongside an assortment of classical instruments which combine to play a whimsical tune.

Like all classic slots in the early Age of the Gods series, the game is controlled by a number of buttons that can be found on an action bar along the bottom of the game reels.

On the left-hand side of the action bar there's an info button that displays key information about the game including the paytable and bonus features, next to this players can change the number of paylines in play (between 1 and 25) and the line bet (between 0.01 and 4). This maximum amount of money players can stake in Age of the Gods Fate Sisters is £100.

On the right-hand side of the game reels is a max bet button, an autoplay button (which allows players to set up to 99 automated spins) and a spin button. Above the reels are of course the four Age of the Gods Progressive Jackpot trackers that display the current value of the Power Jackpot, the Extra Power Jackpot, the Super Power Jackpot and the Ultimate Power Jackpot.

This medium volatility slot can see players win up to 500x their stake if they manage to land five instances of the game's top-paying symbol, Lachesis. It has a slightly below-average RTP of 92.95%, but that's to be expected of a progressive jackpot slot.

Age of the Gods Fate Sisters is a good online slot, despite its advanced age. There are plenty of lucrative bonus features on offer and the opportunity to trigger the Sister's Gift Feature is pretty mouthwatering. If you like progressive jackpot slots (and Age of the Gods) then this might one you should consider playing.