Vikings Go Wild is a 5-reel, 25 payline slot developed by Yggdrasil. It's the first game in what's become a truly iconic series of badass, high-energy slots, that are all about action and adventure. The main feature in this game is the free spins round. Players can benefit from up to 24 free spins in this game with sticky wilds active. This slot sets the benchmark for high-quality, innovative design.

“ A timeless slot let down the bismal win potential ”

Unlike the other two games that followed this slot, Vikings Go Wild is actually quite simple, which makes complete sense considering this was the first entry in the series. There are two main features for players to watch out for, free spins and Treasure chests.

Free spins are triggered when players land 3 or more scatter symbols on the reels during the base game, during this time a Viking character will appear and fight a sea monster. If the Viking wins then their symbol becomes a Sticky Wild for the remainder of the free spins.

When a treasure chest appears on the fifth reel players will open it to reveal an automatic prize of up to 1,000 coins or between 8 and 12 free spins. If the chest lands during a free spin round they'll receive between an additional two and four spins on top of what they'd already earned or a wild reel that's active for the remainder of the bonus. 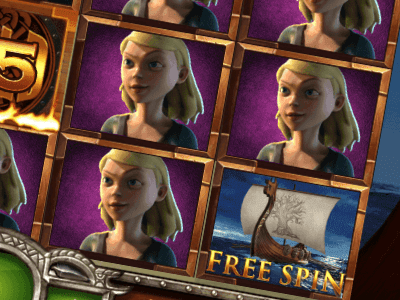 When players land 3 or more scatter symbols they'll receive a number of free spins, the amount depends on how many scatters land. During the feature, a Viking will appear to fight a Kraken, if they succeed then that Viking will see their symbol become a sticky wild for the duration of the spins. 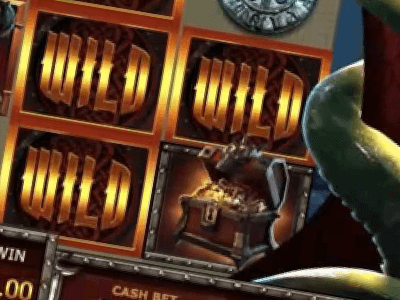 When a treasure chest appears on the fifth reel players will open it to reveal up to 1,000 coins or between 8 and 12 free spins. If the chest lands during a free spin round they'll receive between an additional two and four spins or a wild reel.

Vikings Go Wild is the very first slot in the now iconic Vikings Go series created by developers Yggdrasil. This engaging 5-reel, 25 payline slot is themed around the bravest and most fierce Vikings who are sailing the seas having plundered great riches.

This Norse-inspired slot offers players the opportunity to win up to a maximum of 24 free spins during the bonus round alongside some handy sticky-wilds.

The slot starts with a short introductory cinematic that sees a team of Vikings head into battle with a deadly sea creature (we think it's a Kraken), it's certainly a good way to introduce players to the carnage that's to come (especially later in the series).

Once loaded into the game players will notice that the reels are set upon the sail of a Viking Longship that features menacing dragons at either end. The action bar which features all the important buttons and figures is set upon a large piece of wood with a silver trim in the design of a dragon.

When players enter the free spins bonus round a Kraken emerges from the rough sea as the rain lashes down, its tentacles menacingly wrap around each end of the longship and the Vikings that appear as symbols.

In terms of sound Vikings Go Wild has your standard adventure-themed slot soundtrack, with things ramping up during a win or when a bonus feature is triggered.

Vikings Go Wild is a simple game to keep on top of, it's set out in the same way that all Yggdrasil games are with all the key buttons laid out across the bottom of the screen directly below the reels.

There's a large pink + button on the far left-hand side of the screen, which when clicked brings up multiple options including the paytable, game settings and how to play instructions.

Players can change the coin value using the - and + buttons (the minimum bet in this game is 0.25 whilst the maximum is 125.00, however this may vary from casino to casino).

There are two buttons either side of the play button in the bottom-centre of the game screen, these are the max bet button and the autoplay button (which allows players to place an infinite number of automated spins).

Sadly, Vikings Go Wild is not a very lucrative slot. Despite having a decent RTP of 96.30%, this game sees players win no more than 1,900x their initial stake which is unbelievably low in this day and age, however, it has to be noted that back when this game was originally released, it wasn't terrible. Vikings Go Wild is a medium volatility game, so it's actually worth playing if you're bankroll isn't massive, as you can expect some fairly regular returns.

Vikings Go Wild takes players on an epic journey on the open seas, that's wild from the word go. All in all, it's a pretty good slot, especially for its time. The win potential is disappointingly low, but we have to give Yygdrasil credit for creating a timeless slot that spawned one of our favourite slot series.

Play Vikings Go Wild now at the following verified online slot sites. These slot sites have been thoroughly audited and reviewed by us to ensure they offer an exceptional user experience, are trustworthy, safe, secure, and boast the best variation of online slots in their portfolio including Vikings Go Wild:-

Enjoyed Vikings Go Wild? Here's a handful of similar slots we think you'll like too. These online slots have been chosen based on features and themes similar to Vikings Go Wild. You might also want to check out other Yggdrasil slots.