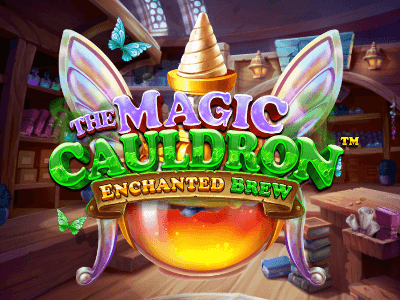 Pragmatic Play's The Magic Cauldron: Enchanted Brew is bubbling with features and wins! Played on a grid of 7 x 7 with the Cluster Pays mechanic, this slot is all about matching symbols.

With multiple wilds, tumble features, random modifiers - The Magic Cauldron: Enchanted Brew is a slot not to miss out on. So grab your wand and join in the adventure!

Jump straight into the action and play The Magic Cauldron: Enchanted Brew now at the following fully licenced UK slot sites. These slot sites have been thoroughly audited and reviewed by the team here at Slot Gods to ensure they offer an exceptional user experience, are trustworthy, safe, secure, and boast the best selection of online slots in their portfolio including The Magic Cauldron: Enchanted Brew...

Starting with the most basic features, The Magic Cauldron: Enchanted Brew is a Cluster Pays slot in which you match symbols to form wins and avoid the typical payline feature. This comes with the tumble feature in which wins tumble off the reels with new symbols dropping in to replace them.

At any point, the Elixir Wilds can land randomly on the reel and add between 4 to 8 wilds. During each spin, you can land a winning combination made of edged symbols with the Moon Seed Mark applied. This adds at least 2 wilds to the positions that are empty and can stay active through the modifier.

There is a cauldron to the left of the reels full of bubbling potions with each win added to the pot. Adding up to 25 symbols will trigger the Progressive feature and award one of the five different modifiers.

Now, the fifth modifiers can award 1 of 2 extra features. This could be the Potion of Darkness which removes lower symbols from the grid with only high symbols left. This could also be the Unicorn Dust feature which adds 3 or 4 unicorn wilds with multipliers attached that increase after every win.

Filling up the cauldron on the left with wins will award one of five different modifiers. These include colossal symbols, replacing lower-paid symbols and further modifiers.

During any spin, you can randomly activate the Elixir Wilds to add between 4 and 8 wilds. Ultimately, this can lead to even bigger wins!

Taking place within the realm of dungeons and magic, Pragmatic Play's The Magic Cauldron: Enchanted Brew is a magic slot playing on a grid of 7 x 7 and utilising the Cluster Pays mechanic. Amazingly, there are 5 modifiers that can be triggered by adding up to 25 symbols to the pot next to the reels.

Aside from that, you can Elixir Wilds and Moon Seed Mark to improve your gameplay even more giving you a better chance to win. The Magic Cauldron: Enchanted Brew is a high volatility slot with a maximum payout of 5,000x your stake. Enter the witches' lair to see if you can concoct some decent wins.

From the background, you'll notice that you are in a witches' lair with different potions and spellbooks around to highlight this. There is even a bubbling pot next to the reels which build up to provide modifiers. This pot animates and generally looks like what you'd expect to find in a magical slot.

Of course, the symbols on the reels are related to magic and feature different elixirs which all look brilliant. There's almost a cartoony aesthetic to this slot but it's all cohesive and goes together well.

Now the music is something bizarre but it goes well with the theme of a mad magician. There are bells, percussions, chanting mixed with synthesisers to create something that sounds off and wrong but fits in so well within this world. However, it may get a little annoying at times so you can find the volume button to the bottom left of the reels.

As previously mentioned, this slot uses the Cluster Pays mechanic which means that you match at least 5 symbols to form a win instead of following a traditional payline system. Ultimately, this is uncomplicated and can be played by anyone - so don't worry about learning tough rules.

At the bottom of the screen, you'll find all the relevant menus that you need including bet level, autospin and the spin button. The spin button is highlighted by Pragmatic Play's trademark crown symbol - so it's easy to find.

According to the developers, the maximum win of this slot is 5,000x your stake and this can be won through the increasing multipliers during the Unicorn Dust feature. Whilst this payout isn't the worse, for a high volatility slot - we'd expect a little higher. Thankfully, the RTP is at a decent 96.44% which is just over the average.

The Magic Cauldron: Enchanted Brew is a spectacular slot in terms of design and gameplay. Overall, the visuals look incredible with so much detail in the background and the Cluster Pays mechanic is always fun to play with.

Sadly, the biggest disappointment comes from the win potential with a maximum win of 5,000x your stake. Whilst this isn't the end of the world, it's a meagre amount that is laughable compared to modern online standards. If you love magical slots and want a little bigger payout, we'd recommend trying Blirix Workshop instead. However, we'd definitely suggest giving The Magic Cauldron: Enchanted Brew a spin to see the creativity on display and for some vibrant gameplay.

Play The Magic Cauldron: Enchanted Brew now at the following verified UK slots sites. These slot sites are fully licenced and have been thoroughly vetted and reviewed by us to ensure they offer a great user experience, are trustworthy, secure, and have a wide variety of the best online slots in their lobbies including The Magic Cauldron: Enchanted Brew:-