Based on the Ted movies starring Mark Wahlberg and a foul-mouth teddy bear, Ted Megaways brings back the anarchic action to the slot reels. The 6-reel slot from Blueprint Gaming features a Megaways engine that delivers up to 117,649 ways to win. The game also packs in plenty of bonus play with free spins, multipliers and cascading wins.

“ Ted brings the fun, chaos and good times to the reels. ”

Jump straight into the action and play Ted Megaways now at the following fully licenced UK slot sites. These slot sites have been thoroughly audited and reviewed by the team here at Slot Gods to ensure they offer an exceptional user experience, are trustworthy, safe, secure, and boast the best selection of online slots in their portfolio including Ted Megaways...

Blueprint Gaming’s Ted Megaways slot brings all the fun and excitement of the hit comedy movie straight to the reels with plenty of high paying symbols and bonus extras. This game has gone under some construction and has been redelivered in the popular Megaways format that enables cascading wins. There is no shortage of extra features to trigger within the game, let’s take a look at what you can expect to find. 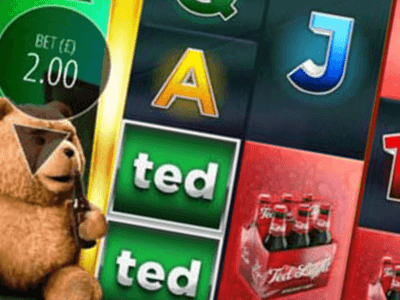 When you land a winning combo, the symbols are removed and replaced with new symbols, providing another chance to hit a win on the same spin. This will keep happening until no winning combo is landed. 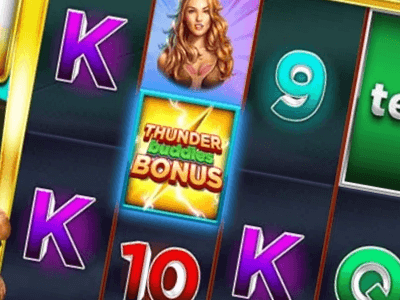 Mystery symbols can land at any time, Ted will add mystery lightning bolt symbols to the reels which transform into the same matching symbol to enhance wins. 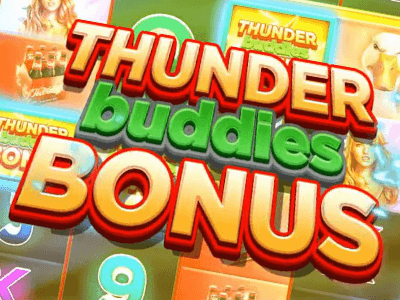 Land 4 or more scatters to trigger the feature, you’ll get 12 free spins and the chance to win more spins through the Thunder Wheel that plays before the free rounds. The spins have expanding multipliers and the Ted symbols can provide more free rounds. 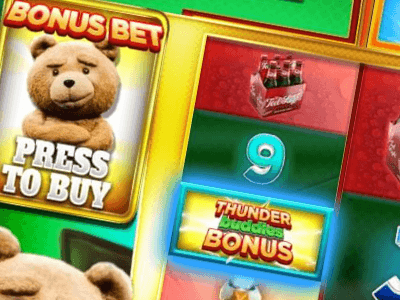 There is a Bonus Bet feature where you buy access to the Thunder Wheel for 150x your total bet. The wheel spins which give you a number of free spins and a minimum number of Megaways. This option isn’t available in the UK though.

The potty-mouthed teddy bear is back and up to no good on the reels in Ted Megaways. Based on the hit 2012 movie from Seth MacFarlane, this exciting slot packs in some enticing wins and plenty of bonus features.

The slot from Blueprint Gaming brings back all the lovable characters on to the reels in a Megaways format with 6 reels. Thanks to the Megaways engine, you get 6 main reels with 2-7 symbols on each, as well as a 4 horizontal reels along the top. The number of win ways starts from 324 and can reach up to 117,649 ways to win, triggering a huge influx of payouts. The game features a generous free spins bonus and plenty of multipliers to boost payouts too.

Blueprint is one of the big players in the industry and has a knack for producing top-quality games. This slot offers their usual high-quality gameplay, brilliant design, exciting animations and an immersive atmosphere that is sure to please any lover of slots. If you love the movie and love slots that are jam-packed with action, then you’ll want to ramp up the fun on the Ted Megaways slot.

Ted Megaways brings all the fun and chaos of the movie into the slot action. The game is set around a house party with the potty-mouthed Teddy Bear on screen, drinking beer and occasionally talking dirty. The slot is full of soft colours that make you feel like you’re right there sharing a beer at a party with the talking bear.

The symbols on the reels are a combination of characters from the movie and items that Ted likes, such as a crate of beer, the goose from the movie, Ted’s love interest and Ted himself. The game’s animation is pretty brilliant with Ted keeping you more than entertained as you spin the reels. You will also enjoy some exciting tributes to the movie when the high payouts and bonus features are triggered. The soundtrack offers a happy vibe as you hit that spin button and hope for the right reel alignment.

The game's visual appearance is pleasing and does a great job of maintaining the movie’s theme across the reels. The Ted Megaways slot creates an environment that takes you on a wild night out where anything can happen.

Ted Megaways uses the Megaways set up with 6 reels and a different number of symbols on each reel. Above the reels sit the four Megaways symbols to determine the high paying combinations. The spin button is big and clear on the right of the reels and beneath that is the auto spin control where you can set up to 100 spins.

To the left of the reels, you have the bet amount that can be set from £0.10 up to £10, making it a more suitable slot choice for the casual player with a modest bankroll. Under the coin amount, you have the audio controls and the information page that provides more detail on the symbol value and pay tables. Despite a Megaways engine, the slot is easy to play and would suit both the slot newbie and the slot supremo.

The Ted Megaways volatility is in the medium to high scale. The RTP is 96.03% so the majority of wins will be frequent but small with the occasional big win. The significant wins come during the free spins round where it’s possible to land a win worth 50,000x your stake. It’s worth mentioning again that the maximum bet amount on this video slot is just £10, so it may not suit those with large bankrolls.

The original Ted slot was jammed with 6 bonus features and plenty of extras. The Ted Megaways version is a little more stripped down with a Megaways engine to compensate for the missing features. The game still brings the same level of excitement thanks to the cascading reels and the Thunder Buddies bonus feature that keeps entertainment levels up. If you’re big on playing for bonus games then the original Ted slot may be a better choice, but if you’re a fan of the Megaways structure then you should pop open a beer and join Ted for a wild slot party!

Play Ted Megaways now at the following verified UK slots sites. These slot sites are fully licenced and have been thoroughly vetted and reviewed by us to ensure they offer a great user experience, are trustworthy, secure, and have a wide variety of the best online slots in their lobbies including Ted Megaways:-

Enjoyed Ted Megaways? Here's a handful of similar slots we think you'll like too. These online slots have been chosen based on features and themes similar to Ted Megaways. You might also want to check out other Blueprint Gaming slots.