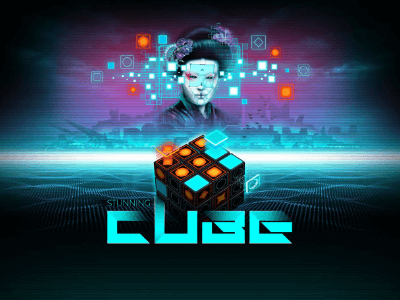 Journey to a vibrant future where cubes control all of your fun. Stunning Cube is a futuristic slot is developed by BF Games and features a 3x3 grid in which cubes move around as you spin.

Despite only having 5 paylines, the game has exciting features such as the Bonus Meter, Free Spins and Cube of Luck.

Jump straight into the action and play Stunning Cube now at the following fully licenced UK slot sites. These slot sites have been thoroughly audited and reviewed by the team here at Slot Gods to ensure they offer an exceptional user experience, are trustworthy, safe, secure, and boast the best selection of online slots in their portfolio including Stunning Cube...

Stunning Cube prides itself on simple but effective features. Naturally, you have traditional wilds and free spins but there is a new additional called Cube of Luck. Essentially, this feature gives you the chance to re-win up to 6x.

Landing the wall of won symbols will re-win the same amount as which the feature was triggered. However, landing the blue wall will end the Cube of Luck bonus feature. Filling the reels with all circles, diamonds, hexagons or squares will result in the Cube of Luck. This allows players to re-win the winning amount up to 6x. Cube of Luck can be triggered both on the base game and free spins.

Welcome to a future where everything looks like it has come straight from Ridley Scott’s Blade Runner. Stunning Cube is a futuristic styled slot that played on a grid of 3x3 with only 5 paylines.

Developed by BF Games, Stunning Cube definitely goes for more of a cool aesthetic rather than complicated gameplay. Just like in Bonnie & Clyde and Book of Gates, BF Games show that they are determined to make visually stunning games that are entertaining.

It’s no surprise at this point that BF Games create the most appealing games aesthetic wise. They absolutely nailed the futuristic vibe with the visuals as the background is made to look like you are in a simulation. From the subtle ripples in the floor to the unnatural cyber landscapes, Stunning Cube will make you feel like you are a science fiction movie like Tron or Blade Runner.

Symbols on the reels are simple as they are just ordinary shapes. The innovative part comes from the reels themselves not spinning but moving around to form. They are cubes that move around randomly as you spin. Honestly, it looks so cool. The whole 3D environment is absolutely breath-taking despite the game being centred on a cube. It could’ve been easy for BF Games to just create a generic background and place the cube in - but they went the extra mile as usual.

Stunning Cube wouldn’t be half as good without the vibrant audio. Featuring keyboard and synths to create a catchy background tune that conveys the full feeling of being in a 'Cyberpunk-esque' world. The only issue to be had is the strange woman above the reels. She is designed as a Geisha but doesn’t really fit into the world. They could’ve left this out and the game would’ve been just as cool.

As a 3x3 grid slot with only 5 paylines - it’s expected that the game is easy. Of course the visuals and sounds are out of this world, but the gameplay is still straight forward. You set your bet, spin and win. The reels themselves don’t naturally spin but they move around to form the reels. That’s the most complicated part about the game as it’s designed to be something that you can pick up and play.

Menus are at the bottom of the screen with the spin and autospin buttons next to them. You have the choice to pick between 10 and 100 autospins that can be cancelled at any time. There is an option for players to turn on turbo mode to speed up - but this feature may not be available in the UK.

Stunning Cube is a medium volatility game with a decent RTP at 96.04%. This is good but the overall win potential is let down by the lack of cash prizes. You only have 5 potential paylines to hit and the maximum win in the base game is 80x your stake if you roll 3 circles.

In the Cube of Luck bonus round you can win up to 480x your stake if you roll 3 circles during the 6x multiplier but that’s as high as you can get. So whilst the RTP is good, the payout isn’t anything to sing home about.

BF Games show that their slots can be stylish and simple in gameplay - but still a lot of fun. It’s the visuals and overall aesthetic that is mind-blowing in Stunning Cube. The gameplay is still fun but there’s only many combinations and features that you can experience before it can start to get a little repetitive.

Stunning Cube is definitely a futuristic title that you should check out for the amazing attention to detail, but you could find yourself being a little bored after a few hours.

Play Stunning Cube now at the following verified UK slots sites. These slot sites are fully licenced and have been thoroughly vetted and reviewed by us to ensure they offer a great user experience, are trustworthy, secure, and have a wide variety of the best online slots in their lobbies including Stunning Cube:-

Enjoyed Stunning Cube? Here's a handful of similar slots we think you'll like too. These online slots have been chosen based on features and themes similar to Stunning Cube. You might also want to check out other BF Games slots.