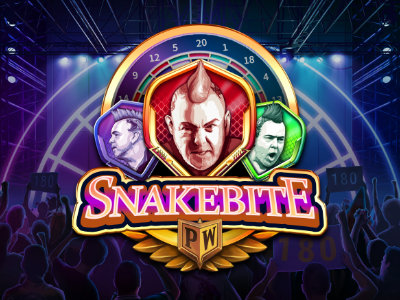 Snakebite is a 5-reel, 10 payline slot based on flamboyant World Champion darts player Peter 'Snakebite' Wright. This brilliant branded game developed by Play'n GO sees Wright step up to the oche to throw darts at the reels as part of the Snake Spins feature, winning players up to 6,000x their stake in the process.

“ Snakebite is easily the best darts-themed slot to date! ”

Snakebite features a handful of excellent bonus features and mechanics that players can sink their teeth into. These include trophy wild and dartboard scatter symbols that award players fixed prizes and Snake Spins, a respin mini-game that sees the World Champion darts player throw darts at a 5x5 grid, growing an overall win multiplier.

Trophy wild scatter symbols can land on any reel, this symbol substitutes for all others except dartboards and Peter Wright symbols. If 3 or more trophy symbols land on the reels then players will receive a fixed cash prize.

If 2 or more Dartboard symbols land on the reels AND a Peter Wright symbol lands on reel 5 then players will trigger the Snake Spins feature.

If the Peter Wright symbol does not land but dartboard symbols do then the dartboards will pay out an instant prize of either 1x, 2x, 5x or 10x the player's stake (per dartboard).

If 2 or more dartboard symbols land on the reels as well as the Peter Wright symbol on reel 5 then players will trigger the Snake Spins feature.

The Snake Spins feature sees players receive 3 free spins on a special expanded 5x5 set of reels. The dartboards that triggered the feature are carried into the Snake Spins and are converted into Instant Prizes (worth 1x, 2x, 5x or 10x the player's stake).

During the Snake Spins feature the only symbols that can land are Snake Snap, Peter Pays, and Golden Darts.

If players land a Peter Pays symbol then the value of all instant prizes on the reels will increase.

If players land Golden Darts then the overall win multiplier will increase by up to 10x. 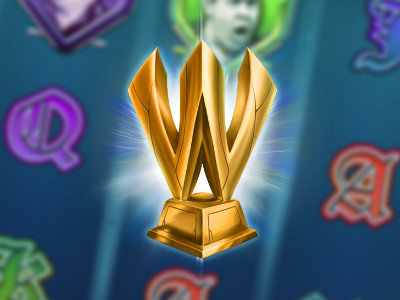 Dartboard and Trophy symbols act as scatter and wild symbols respectively in Snakebite. In addition to this, both symbols also pay out fixed cash prizes upon landing. 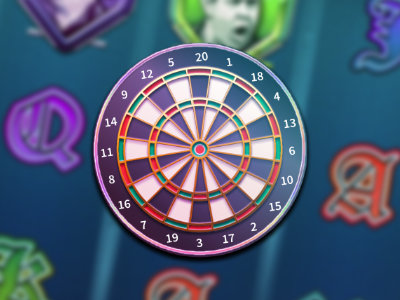 If players land 2 dartboard scatter symbols and one Peter Wright symbol on reel 5 then Wright will enter the game and throw darts at a new 5x5 set of reels. Only instant prizes, snake snap, Peter Pays and Golden Dart symbols will land.

Snakebite is a truly exciting 5-reel, 10 payline branded slot that's based on PDC darts World Champion Peter 'Snakebite' Wright. This Play'n GO slot features Instant Prize Wins and a Snake Spins feature that sees the world-famous darts player set up to the oche to win players big money prizes worth up to 6,000x their stake.

If you've ever watched Peter Wright in action then you'll know that this larger than life character dances up to the oche to high-energy hit Don't Stop The Party by Pitbull. Whilst the chart-topping song doesn't feature in this slot (we imagine that would cost a bomb to license!), Play'n GO have added their own dance music that is somewhat similar, and just as catchy. In addition to this, there are fan chants and a commentator that makes reference to what's going on on the reels on practically every notable spin.

In terms of design, this slot is a significant upgrade on Blueprint Gaming slot World Dart's Championship. This feels much more like an official PDC darts slot than the actual branded one, behind the reels is a neon version of the PDC darts stage, in front of that stage are a whole host of raucous darts fans.

The game really comes to life when players trigger the Snake Spins feature, a wonderfully realistic 3D version of Peter Wright excitedly jumps onto the screen and does his signature dance across the reels before stepping up to the oche and throwing darts onto the Snake Spins grid.

We've often found that branded slots are simple to play as they often draw in brand new online slots players based on star-power alone... Snakebite is no different. Play'n GO has developed an online slot that has no confusing mechanics, nor does it require any know-how to navigate.

All of the key buttons can be found on an action bar along the bottom of the game screen. This action bar features an info button, a stake selection tool, spin and autospin.

Snakebite is a medium volatility slot that has an RTP of 96.20% and can see players win a maximum of 6,000x their stake. This feature-filled game offers players plenty of opportunities to pick up some decent-sized wins, especially considering scatter symbols offer players an instant payout even if they don't trigger the Snake Spins feature.

If you're a fan of darts then you're going to absolutely love Snakebite! This is the best darts-themed slot to date in our opinion (not that there are that many to choose from at the moment). There's not a whole lot to talk about in terms of bonus features and mechanics, but the ones this slot does have are awfully fun and proved to be lucrative. Again, if you like darts and you like slots then you're in the right place... So without further ado, let's play darts!

Play Snakebite now at the following verified online slot sites. These slot sites have been thoroughly audited and reviewed by us to ensure they offer an exceptional user experience, are trustworthy, safe, secure, and boast the best variation of online slots in their portfolio including Snakebite:-

Enjoyed Snakebite? Here's a handful of similar slots we think you'll like too. These online slots have been chosen based on features and themes similar to Snakebite. You might also want to check out other Play'n GO slots.