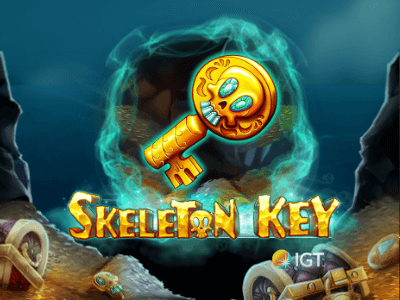 Join the ghastly Skeleton Key slot to uncover buried treasure with up to 7,776 ways to win with expanding reels.

With features such as Mystery Symbol and Free Spins with multipliers, you'll be finding the cash prize in no time. Let's hope that it's not haunted though.

Jump straight into the action and play Skeleton Key now at the following fully licenced UK slot sites. These slot sites have been thoroughly audited and reviewed by the team here at Slot Gods to ensure they offer an exceptional user experience, are trustworthy, safe, secure, and boast the best selection of online slots in their portfolio including Skeleton Key...

With wilds, free spins and expanding paylines - Skeleton Key has some haunting features. Not only that but you can win a multiplier during free spins for each skeleton symbol on the reels and even re-trigger the free spins round through landing 3 or more padlock symbols.

It also features the MultiWay Xtra game engine that changes where the number of symbols are on a reel during each spin. This works with the expanding paylines to give you a better chance to win. All you'll need to do it land 3 or more matching symbols on adjoining reels.

Starting with 243 ways to win, landing a key symbol opens up the reel to reveal 3 more symbols. More symbols mean more ways to win and if all 5 reels show the maximum symbols - then you will have 7,776 ways to win.

Any spin could contain a mystery symbol in the shape of a question mark. They can transform any symbol except the key, bonus or wild. All question mark symbols turn into the same symbol on the reel for a payout.

Landing 3 or more padlock symbols will activate the free spins. You’ll receive 10 free spins initially but be awarded an extra 10 for each additional padlock symbol. Starting with a 1x multiplier, but increases with each skeleton key symbol that lands.

More like a horror slot with adventure elements, Skeleton Key has 5-reels with 243 base paylines that expand to 7,776 throughout the gameplay. Developed by IGT, this slot features spooky skeletons, mysterious ghosts and haunting imagery that’ll leave a shiver down your spine.

Straight from opening the slot, any fans of The Goonies will notice some similarities. Whilst it has a creepy setting - it leans more towards soft horror than gruesome. The background is in an abandoned cave filled with treasure, pirate ships and skeletons. Symbols and general designs look cartoonish rather than sinister which dies down the horror quite a bit.

Epic music is played in the background to emulate a pirates’ voyage or big adventure, which only adds fuel to the comparison between this slot and The Goonies’ film and slot. They are two completely different things but it’s clear that a lot of inspiration came from The Goonies.

As with most IGT games, you’ll find the menus at the top. Payline, game rules and sound options will all be available there. The bet level will be available to the left of the reels, whilst the spin and autospin buttons are to the right. You can set a bet between 0.10 and 300.00 with the max autospin at 50.

The most you can win in the base game is 50x your stake with 5 of the skeleton chests rolled. With the MultiWay Xtra feature, there are 243 to 7,776 ways to win on every spin. By expanding the paylines to 7,776 and multipliers in the free spins, you could win up to 83,333x your stake. However, it is capped after this so you’ll have to settle with 83,333x your stake.

Now, the RTP ranges between 92.43% and 96.49%. This means that the RTP can vary depending on the length of your playthrough. The fewer the games, the higher the RTP. With the higher RTP being at 96.49%, the win potential is pretty good. Of course, the variance is a little disappointing.

Skeleton Key is spooky enough but doesn’t reinvent the wheel. That’s not to say that it’s not a fun and entertaining slot, but don’t go in expecting too much. The free spins with multipliers and mystery symbols are a cool feature that’ll help you win even more.

Don’t expect a terrifying game with this horror theme slot, it’s more leaning towards 80s family friendly horror. If that sounds like a slot for you, then give Skeleton Key a try.

Play Skeleton Key now at the following verified UK slots sites. These slot sites are fully licenced and have been thoroughly vetted and reviewed by us to ensure they offer a great user experience, are trustworthy, secure, and have a wide variety of the best online slots in their lobbies including Skeleton Key:-

Enjoyed Skeleton Key? Here's a handful of similar slots we think you'll like too. These online slots have been chosen based on features and themes similar to Skeleton Key. You might also want to check out other IGT slots.