The Goonies is a 5-reel, 20 payline slot developed by Blueprint Gaming based on the 1985 Steven Spielberg cult-classic! This bumper slot is filled with 12 bonus features and modifiers in total, with players getting the chance to enjoy colossal symbols, wild reels, guaranteed wins, pick and click mini-games and a ton of free spins!

Strap yourself in folks, The Goonies has a LOT to offer in terms of bonus features and mechanics. There are 12 features in total, 6 that can be randomly triggered during base gameplay when a One-Eyed Willy’s Riches symbol glows and 6 that can be triggered when players land 3 or more One-Eyed Willy bonus scatter symbols anywhere on the reels. 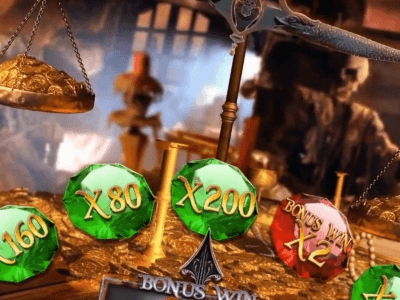 The Goonies features 6 bonus modifiers that can be triggered when a One-Eyed Willy’s Riches symbol lands on the reels and glows. These features include guaranteed wins, wild reels, mystery symbols and colossal reels. 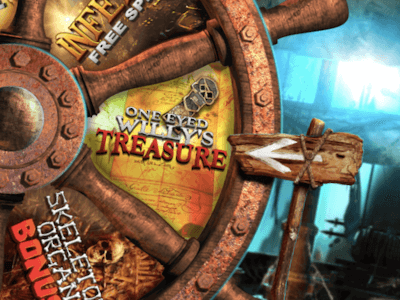 The Goonies features 6 main bonus features that can be triggered via a bonus modifier or 3 scatter symbols. A wheel-of-fortune is spun to determine which one of six lucrative bonus features is triggered.

The Goonies is a 5-reel, 20 payline Blueprint Gaming slot based on the classic Steven Spielberg movie from the 1980s. This timeless family favourite has been wonderfully adapted for the online slot world and features 6 randomly bonus modifiers and 6 main bonus features!

It might seem a lot to take in at first, but give this game some time and take in everything it has to offer! The Goonies set the way for Blueprint Gaming to develop similar feature-rich branded slots such as Sausage Party and Rick and Morty Wubba Lubba Dub Dub.

First and foremost, we must warn you... If you're playing with the volume up, you might want to turn it down before you open this game, the first thing that happens when you hit play is a loud voice clip of Sloth shouting HEY YOU GUYSSSSSSS! This is shortly followed by Chunk zooming past the screen doing the truffle shuffle. It's great fun, but you might get some strange looks if you launch this game on your phone somewhere public!

Once in you're greeted with the same treasure map the kids follow in the movie, scattered around the map is priceless pirate gold! Low paying symbols on the reels are your standard J, Q, K, A whilst high paying symbols are a scale, skeleton, pirate ship, treasure chest and jolly roger flag! The special wild symbol is a medallion.

With plenty of voice clips and a pretty decent soundtrack, you should be suitably impressed with what Blueprint Gaming has to offer here! As you would expect from a Blueprint Gaming branded slot, this game looks and sounds pretty great!

This branded Blueprint Gaming slot has no action bar, instead, there's a stake selection button on the far left-hand side of the reels (that can see players change their stake between 0.10 and 200) and a play button incorporated into the game's overall design on the right-hand side of the screen... That's pretty much it! There is a small hamburger menu on the left that brings up game information and a small autoplay button below the play button that allows for up to 100 automated spins.

This medium volatility slot has an average RTP of 96% and can see players win a maximum of 500x their stake, it's not a huge amount, but this game is so jam-packed with exciting bonus features and modifiers that we wouldn't let this put you off too much.

The Goonies is a fantastic branded slot that's only let down by a disappointingly low win potential. But if you look past this then you're genuinely looking at a cult classic much like the movie! There's a good reason Blueprint Gaming has made so many similar branded slots after this success of this one!

Play The Goonies now at the following verified online slot sites. These slot sites have been thoroughly audited and reviewed by us to ensure they offer an exceptional user experience, are trustworthy, safe, secure, and boast the best variation of online slots in their portfolio including The Goonies:-

Enjoyed The Goonies? Here's a handful of similar slots we think you'll like too. These online slots have been chosen based on features and themes similar to The Goonies. You might also want to check out other Blueprint Gaming slots.