The Ronnie O’Sullivan: Sporting Legends slot is part of the Sporting Legends jackpot series from Playtech. The game is set around the world champion snooker player “Rocket” Ronnie O’Sullivan who has the record of clearing the table with the fastest 147 in snooker history. The game is played on 5 reels with 25 paylines. You will also find a good amount of bonus features and three randomly triggered progressive jackpot prizes to play for.

Jump straight into the action and play Ronnie O'Sullivan Sporting Legends now at the following fully licenced UK slot sites. These slot sites have been thoroughly audited and reviewed by the team here at Slot Gods to ensure they offer an exceptional user experience, are trustworthy, safe, secure, and boast the best selection of online slots in their portfolio including Ronnie O'Sullivan Sporting Legends...

The Playtech-powered slot has pockets full of features, as you’d expect from one of the industry leaders. The game has a pick me style features, a free games bonus round, heaps of multipliers and three progressive jackpot prizes. The top jackpot currently sits at over £127,000, with a daily and weekly jackpot also providing tidy payouts. Let’s take a look at what features you can find in this Playtech title. 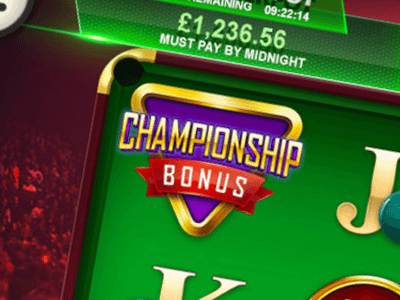 If the Championship Bonus symbol lands simultaneously on reels 1 and 5, you will trigger the feature. Here you pick from 5 snooker balls that give you cash prizes or reveal ‘Win All’ for all prizes or ‘Collect’ which ends the feature. You will move to the next round where more prizes are on offer until you land ‘Collect’. 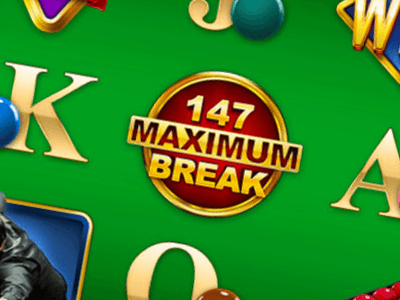 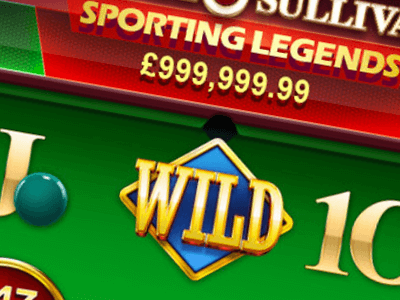 Ronnie O’Sullivan: Sporting Legends has crisp graphics and smooth gameplay. There are plenty of frequent rewards and the bonus features are not shy of popping up. Set as if a snooker game if taking place, this slot will please those who are fans of the sport. Although, the fun slot environment is enjoyable for any slot enthusiast.

The slot game has some high paying symbols to hit with up to 5,000x your bet to pocket. The game has a bonus round fit for a champion and a slick appearance that ups the fun levels. Playtech has hit a high score by paying tribute to a snooker legend through this fun-filled slot title.

On the reels, you will find Ronnie O’Sullivan himself, a full rack of snooker balls, chalk, the white and black ball and the different colour balls making up the low paying symbols. There is a good level of animation to keep interest levels high and when wins and features are landing, the animation is ramped up for more thrills.

Ronnie O’Sullivan: Sporting Legends is a very straightforward slot with 5 reels and a spin button. You don’t need to worry about any complex features or unfamiliar gameplay. At the top of the reels, you will see the three jackpot prizes in green, red and blue. At the bottom end of the reels are the game controls. Here you have the spin button in red, with the rest of the controls in green. Next to the spin button is the autoplay where you can set up to 99 spins. You can also set the bet amount which ranges from £0.25 to £25. There is also an info tab where you can view a breakdown of the symbols and how to trigger the bonus extras.

The Ronnie O’Sullivan: Sporting Legends slot from Playtech has some decent win potential. The game has a good number of features that pop up fairly regularly. The game has a 93.07% return to player percentage which is on the low side of Playtech’s standards. The 147 Maximum Break Free Games feature is where the big payouts come, thanks to the high multipliers available.

The biggest draw is the three progressive jackpot prizes that can be triggered on any random spin. The biggest jackpot was sitting at over £127,000 at the time of writing!

Playtech’s Ronnie O’Sullivan: Sporting Legends slot impresses with everything from its visuals to its sound effect and its payout frequency. The bonus features provide enough action to keep the excitement up and the jackpots are more than appealing. Playtech has produced a slot fit for a champion and a legend. This game will please all players, especially snooker fans.

Play Ronnie O'Sullivan Sporting Legends now at the following verified UK slots sites. These slot sites are fully licenced and have been thoroughly vetted and reviewed by us to ensure they offer a great user experience, are trustworthy, secure, and have a wide variety of the best online slots in their lobbies including Ronnie O'Sullivan Sporting Legends:-