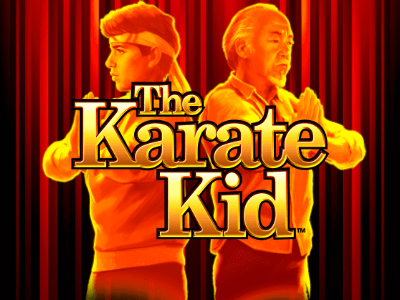 Based on the martial arts film of the same name, The Karate Kid slot follows Daniel LaRusso and his mentor Mr Miyagi as they attempt to win the All Valley Championship Pick!

There are 5 different modifiers, 4 different free spins round, an explosive respin round and even a progressive jackpot. Skywind’s The Karate Kid slot has everything you could possibly want in an online slot.

“ One of the best branded slots we’ve ever seen with an intricate attention to detail! ”

Jump straight into the action and play The Karate Kid now at the following fully licenced UK slot sites. These slot sites have been thoroughly audited and reviewed by the team here at Slot Gods to ensure they offer an exceptional user experience, are trustworthy, safe, secure, and boast the best selection of online slots in their portfolio including The Karate Kid...

The Karate Kid slot is packed full of cool features that’ll just improve your gameplay experience even more. It all starts with Mr Miyagi and his Miyagi-Do Taster feature that can be won at random. Here are the five different options that players could win:

Amazingly, there are 4 different free spins rounds each with their own bonuses. Not just that, but they can even be retriggered.

The final feature of The Karate Kid includes the Fight! Tournament respin feature. 10 or more sun scatters during the Fight! Taster game or matching 3 Fight! Symbols during the All Valley Championship triggers this feature.

After the feature is activated, the grid turns into a 10x4 grid with 3 respins remaining. They can be retriggered with additional suns landing. If the first row is filled with the sun but the second one is not, then the player will win 2000x their stake. Ultimately, this can lead to the jackpot if the entire grid is filled with sun symbols and players can win the progressive jackpot. At the start of any spin, 1 of the 5 Miyagi-Do Taster features may be won at random. These include the Fight! Taster, Crane Kick! Taster, Banzai! Taster, Wax on, Wax Off! Taster and Paint the Fence! Taster. The Karate Kid symbol acts as a scatter and rolling 3 of him throughout the base game and taster games can lead to this mode. However, during the Crane Kick! Taster, you only need one of these symbols. You select from 19 tournament fists until they reveal 3 matching names. During the All Valley Championship Pick, players can unlock free spins by landing 3 of the same symbols. The Crane Kick! symbol, Banzai! symbol, Wax on, Wax off! symbol and Paint the fence! symbol all lead toward individual free spins rounds.

The 1980s were known for a huge array of classic films, but perhaps the most iconic is John G. Avildsen’s The Karate Kid film released in 1984. It became iconic for popularising Karate in the USA and focused on the relationship between a troubled teenager and his mentor.

Thankfully, Skywind decided to adapt this story into a TV/Movie slot to bring the story back to modern audiences. With the success of the TV show Cobra Kai, it’s no surprise that a slot was made on the original film.

Playing on 6-reels with up to 10,000 ways to win, this is not a slot to mess around with. Players can gain 1 of 5 modifiers, 4 different free spins, respins, and even a progressive jackpot during the gameplay. There is so much going on with this slot and we absolutely love it!

As the slot opens, cinematic plays from the film and shows the All Valley Championships. Once the cinematic finishes, you are directed to a title screen featuring all the main characters from the film. These characters even act as symbols on the reels with no one left out of the fray.

Obviously, Daniel LaRusso (played by Ralph Macchio) and Mr Miyagi (played by Pat Morita) are featured on the reels with the biggest payout at 250x by landing 6 of a kind of these. These are followed by Ali Mills (played by Elizabeth Shue), Johnny Lawrence (played by William Zabka) and John Kreese (played by Martin Kove).

The reels feature Daniel and Mr Miyagi training during the base game, but this soon changes once you hit the respin round. It soon becomes a battle between Daniel and William to see who can defeat who. Honestly, it’s an utter delight for fans of the film and may even feel retro for newcomers to the series.

It’d be strange if the slot added a modern score, and thankfully it retains the 80s pop sounds. There is steady music played throughout the spins and it becomes more intense during the battle between Daniel and William.

Despite there being a load of features, the gameplay is still relatively simple. As a player, all you need to do is decide how much you want to spend and how to spin. These can be found at the bottom of the reels. Interestingly, the Skywind autospin button is a simple toggle that you activate on or off.

You’d except a slot with an RTP of 94.02% be seen as a poor slot, but with a progressive jackpot attached - it’s pretty solid. During the base game, you can win up to 250x your stake by landing 6 symbol of Mr Miyagi or Daniel.

Of course, this won’t satisfy high rollers but don’t worry as the Fight! Tournament respin mode players the chance to win up to 2,500x their stake. If you manage to fill all 10 of the rows, then you can win on the All Valley progressive jackpot.

In the original film, Mr Miyagi stated that “You trust the quality of what you know, not quantity.” With this slot, it’s literally both! The quality of the features and gameplay is phenomenal with so much variety and depth. It’s an utter delight to play this slot and provides enjoyment for newcomers to the series and fans of the original film.

Skywind clearly put a lot of effort into this slot to make sure that it provided enough references for fans whilst not isolating newcomers. The Karate Kid slot is perhaps one of the best-branded slots we’ve ever seen on Slot Gods.

For an unmissable experience with 5 modifiers, 4 free spins, a massive respin feature and a jackpot, try out The Karate Kid!

Play The Karate Kid now at the following verified UK slots sites. These slot sites are fully licenced and have been thoroughly vetted and reviewed by us to ensure they offer a great user experience, are trustworthy, secure, and have a wide variety of the best online slots in their lobbies including The Karate Kid:-

Enjoyed The Karate Kid? Here's a handful of similar slots we think you'll like too. These online slots have been chosen based on features and themes similar to The Karate Kid. You might also want to check out other Skywind slots.