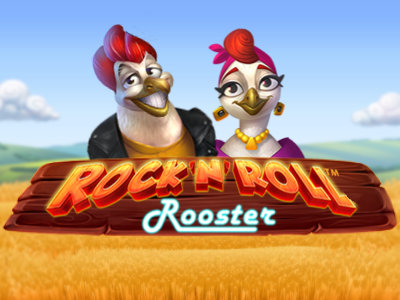 Rock n Roll Rooster is a 5-reel, 9 payline animal-themed slot developed by Czech developers SYNOT Games. This quirky slot sees a rockabilly rooster entertain players as they spin the reels in an attempt to trigger some lucrative features such as free respins, a hold feature, gamble features and a Pick the Chick Bonus Game.

“ A quirky slot that's let down by its win potential ”

Truth be told, this is an incredibly simple game and it's an ideal slot for first-time players that perhaps want to play something they might recognise from playing in the casino or on a fruit machine in a pub or bar.

First and foremost, the main allure of Rock n Roll Rooster is the fact that players can hold any reels they want after a non-winning spin, this gives them the opportunity to potentially create a winning payline if they feel they're close to achieving something good.

It's worth noting that players only have around five seconds to decide whether they want to hold any of the reels in place before they automatically respin free of charge.

In addition to being able to manually hold reels, the game will automatically hold suggested reels when players are one symbol away from creating a winning payline or triggering a bonus feature.

Players have the ability to gamble any win that does not exceed 55,000, whether that be picked up during base gameplay the Pick the Chick Bonus Game.

Players gamble by correctly guessing the colour of a playing card (red or black). If they guess correctly they'll double their prize, if they guess incorrectly then the entire win is forfeited.  Wins can be gambled a total of ten times, which can lead to some seriously big wins. If a joker lands then it'll substitute any colour playing card.

Players can also halve their win, sending 50% of it into their main balance, whilst still gambling the remaining 50%.

If players land 3 or more bonus symbols they will trigger the Pick the Chick mini-game, based on the number of bonus symbols that land players will have to pick 3, 4 or 5 chickens, upon choosing they'll reveal a cash prize. 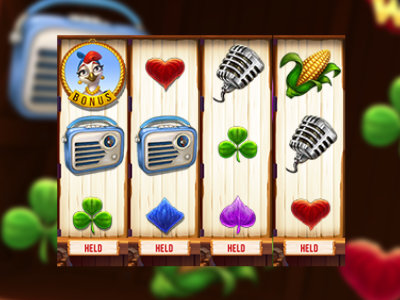 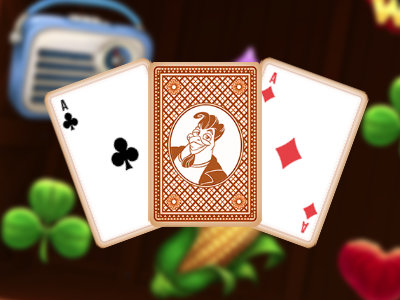 Players can gamble any win up to the value of 55,000. Players can try and double their money up to 10 times by guessing the colour of a playing card. They can also bank 50% of their win and gamble the rest. 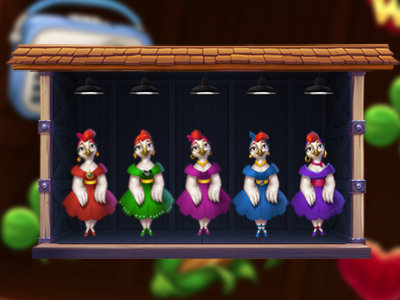 If players land between 3 and 5 scatter symbols anywhere on the game reels they'll be taken to a pick and click mini-game that sees them select a chick that reveals a cash prize.

Rock n Roll Rooster is a 5-reel, 9 payline animal-themed slot developed by SYNOT Games. This eccentric slot sees a rockabilly-inspired Rooster frolicking around the reels as players make use of free respins, a hold feature, gamble features and a Pick the Chick Bonus Game in an attempt to win the game's top prize of 500x their stake.

Rock n Roll Rooster looks absolutely fantastic, in fact, its quirky design is genuinely what drew us to review this slot. The first thing players will notice is the cool Rooster stood to the left of the game reels wearing a leather jacket with slicked-back hair, throughout gameplay he'll celebrate wins, make animated gestures and will even whip out an electric guitar at times serenading all the chicks in the barn.

Low paying symbols are mostly all designed to look like card suits made from colourful feathers, these include a four-leaf clover, a diamond, spade, and heart. High paying symbols include a piece of corn, a radio, a microphone and a golden dollar sign encrusted with jewels.

In terms of the soundtrack, a cool low key rock and roll tune plays (as well as ambient noises from around the farm the game is set in)... However, when players manage to register big wins and trigger bonuses the tempo picks up considerably.

One thing we like about SYNOT Games is that their games are simple and welcoming for brand new players. All of the game's key buttons can be found on an action bar running along the bottom of the game screen. If players wish to access game settings or the paytable they can press a hamburger menu on the bottom left hand corner of the screen.

If players wish to hold any of the reels after a non-winning spin then they can do so by pressing the large white HOLD buttons under each reel. Players only have about 5 seconds to hold reels after a spin before it automatically respins free of charge.

The major letdown with this slot is its maximum win potential, sadly, this low/medium volatility slot can only see players win a total of 500x their stake, which is at pretty much at the lowest end of the scale in terms of what we'd realistically want from of a slot.

That being said, it's worth noting that the ability to hold reels ahead of a respin is absolutely free, clawing back some points for this Rock n Roll Rooster. There are online slots out there that force players to pay to hold reels, such as the Microgaming slot WWE Legends: Link and Win.

Rock n Roll Rooster confused us a little bit. On one hand we LOVED the fact that we were able to benefit from respins after every spin, and the ability to hold reels free of charge... But what we weren't overly impressed with was the fact that we could only win a maximum of 500x, which is frustratingly low.

Enjoyed Rock n Roll Rooster? Here's a handful of similar slots we think you'll like too. These online slots have been chosen based on features and themes similar to Rock n Roll Rooster. You might also want to check out other SYNOT Games slots.