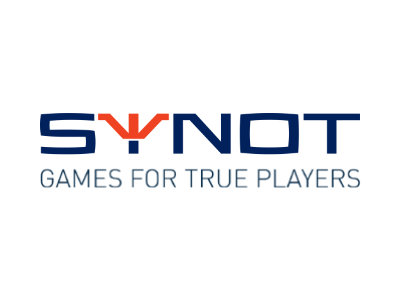 SYNOT Games are an international development studio hailing from the Czech Republic that's part of the iconic SYNOT Group. The studio's mission statement is to provide passionate casino players with top-level quality to keep them thrilled and entertained at all times.

With more than 30 years of experience behind them as part of the SYNOT Group, the talented team of more than 120 members of staff have produced over 80 online slot and casino games.

Here you'll find the very best SYNOT Games has to offer, you won't find a single dodgy slot in this section, just the most impressive games the Czech masterminds have available to play at slot sites right now!

These titles have been rated highly in a number of different areas, including features, design, gameplay and win potential... If you want to get a true representation of what each slot is about we'd recommend reading their in-depth reviews.

What are you waiting for? Hit Play Now on one of the below slots to experience the very best SYNOT Games online slots.

Think you've seen absolutely everything from SYNOT Games? Think again! Here you'll find our collection of brand new SYNOT Games online slots. We keep on top of every new online slot release so that you don't have to.

If you're looking for something new to play and aren't quite sure what, we'd highly recommend giving all of the below games a look in. All you need to do is click on one of the slots and you'll be shown a comprehensive review along with bonus feature gameplay videos.

These fun, engaging titles have been thoroughly playtested by our expert team before arriving on-site, so you know you're getting quality games!

Below you'll find a complete list of SYNOT Games slots in alphabetical order. Click on a slot to find out more about it and play for free or real.

Looking for somewhere to play SNYOT Games slots? Don't sweat it, below we've compiled a comprehensive list of the best slot sites to play SYNOT Games slots at... We think you'll be suitably impressed with the slot sites we're offering.

Each site has been independently verified by a member of our team to identify that it's licensed, regulated, and most importantly has a whole host of safe and enjoyble online slot games from top developers such as SYNOT Games.

Not only are we offering you a home to play SYNOT Games, but we're also delivering great bonuses that can offer them treats such as bonus cash and free spins!

SYNOT Games was founded as SYNOT Group in 1991 by Czech entrepreneur Ivo Valenta alongside his father and brother. Despite starting out as a modest family business, the company has grown exponentially over the years.

The iGaming side employs over 120 members of staff and operates in over 180 operators in more than 20 countries (with more planned in 2022). They are not just licensed in the United Kingdom with the Gambling Commission, but licenced with MGA, KANSSPELCOMMISSIE and ONJN as well.

A brief history of SYNOT

In the early days, SYNOT rose to prominence as one of the Czech Republic's largest and most popular lottery equipment firms. As the years rolled on the company began acquiring similar businesses until they had amassed a small empire of businesses, today they have companies that specialise in IT, security, media, tourism, start-up support, sport and non-profit activities and even car sales.

Such was their prominence within the country, in 2014 SYNOT agreed to become the title sponsor for the top division of Czech football, the SYNOT LIGA plays host to a small handful of some of Europes most prominent football clubs including Sparta Prague, Slavia Prague and Viktoria Plzeň, all mainstays in the UEFA Europa League and UEFA Champions League.

The studio's mission focus is to provide players with top-level quality to keep them thrilled and entertained at all times. They are constantly developing and utilising the latest technology and processes making sure that the games are of the best quality possible.

Thankfully, all of their games can run on any device including Apple, Android and Windows along with optimised interfaces for desktop and mobile so you know you are getting the best experience possible. In most of their slots, you'll find an optional gamble feature with a halve option, an impressive Hold and Win respin mechanic, free spin bonuses, fixed jackpots and certified RTPs between 88 to 98%.

As mentioned earlier, SYNOT Games has its own innovative respin mechanic with Hold and Win. Often triggered through landing 6 or more bonus symbols, the respin mechanic is triggered with 3 respins that reset with every symbol that lands.

In addition to the impressive respin mechanic, they often have a fixed jackpot attached giving you the chance to win even larger amounts. Aztec Jaguar Hold and Win and Tiki Princess Hold and Win are two of the best examples that we recommend trying out.

Something for every player

If you want slots with engaging mechanics and fun gameplay, then be sure to check out SYNOT Games' amazing slots. Some of their best online slots include Book of Secrets 6, Jack and the Mystery Monsters, Zeus Wild Thunder and Pixel Reels, just to name but a few!