Rich Wilde and the Aztec Idols

The slot that started it all for this iconic epic Play’n GO series! Aztec Idols is a 5-reel, 15 payline slot that will take you on an unforgettable adventure deep in the South American jungle with dashing protagonist Rich Wilde on the hunt for priceless Aztec riches.

Jump straight into the action and play Rich Wilde and the Aztec Idols now at the following fully licenced UK slot sites. These slot sites have been thoroughly audited and reviewed by the team here at Slot Gods to ensure they offer an exceptional user experience, are trustworthy, safe, secure, and boast the best selection of online slots in their portfolio including Rich Wilde and the Aztec Idols...

There are three major bonus features and mechanics that you should be aware of in Rich Wilde and the Aztec Idols, with the first being a gamble feature that tasks the players with guessing the outcome of a playing card. If you can correctly guess the colour of a playing card you’ll automatically double their winnings. If you can guess the suit then you’ll quadruple them.

Understandably, you can only play the gamble bonus up to five times in succession up to a total limit of 2,500… Otherwise, we’d be seeing some HUGE winners! Of course, playing the gamble feature comes with an element of risk as you could lose your winnings with one incorrect guess.

If players successfully manage to land 3 Inca Pyramids anywhere on the reels during the base game then they’ll automatically trigger the Pyramid click and pick mini-game. Players are shown five Inca Idols sitting on plinths on a second screen, they must then pick one at a time randomly.

If players click a winning idol they’ll be awarded with a set cash prize, if they pick a booby-trapped idol then poisonous gas will be released and the bonus game ends immediately.

The only disappointment with this bonus round is that it only gives 150x your total bet as a maximum prize… However, considering the age of the slot we can’t complain too much.

If players land 3 sunstone symbols anywhere across the reels during the base game then they’ll unlock a free spins bonus round. Before the free spins begin a sunstone wheel will spin, stopping on a symbol and a number one after the other.

The symbol that the wheel stops on will automatically become an extra scatter symbol for the duration of the round whilst the number denotes how many free spins the player will receive. Players can win a maximum of 20 free spins in total 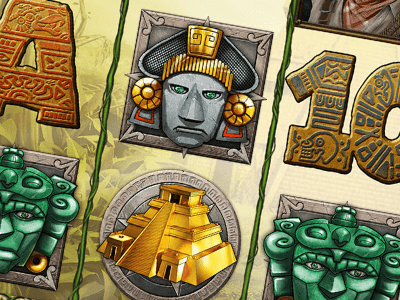 If players land 3 Inca Pyramids anywhere on the reels during the base game they'll trigger the Pyramid Pick and Click game. This sees players win a set cash prize worth up to 150x your bet. 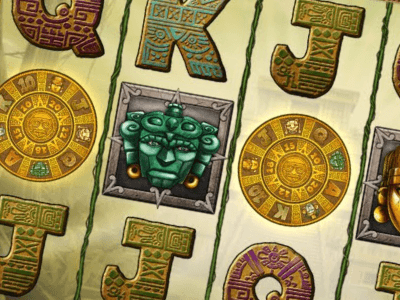 If players land 3 sunstone symbols anywhere across the reels during the base game then they’ll unlock a maximum of 20 free spins.

Rich Wilde and the Aztec Idols is the very first title in what has now become online slot developer Play’n GO’s most iconic series to date. You’ll join Indiana Jones-inspired adventurer Rich Wilde in the hunt for Aztec treasure deep within the Mexican jungle.

This high volatility 5-reel, 20 payline slot certainly has plenty to offer players in the way of bonus features and mechanics, especially considering its age, having been released back in 2012.

We’re not going to pretend that the concept itself isn’t somewhat dated, and Rich Wilde himself isn’t massively cliche, but considering this game came out such a long time ago we have to give it props for being amongst the first online slots to really pioneer character-driven gameplay.

There are slots out there that can offer what Rich Wilde and the Aztec Idols does, but that doesn’t mean you should overlook this classic title. Any game that can launch such a successful series deserves a solid look-in.

Rich Wilde and the Aztec Idols is your stereotypical adventure themed online slot with the reels being set on intricate sand coloured basalt stone Aztec architecture is synonymous with.  Behind the reels you’ll find thick jungle foliage.

Naturally, the higher paying symbols in this game are ancient Aztec idols and the man himself, Rich Wilde. whilst the lower paying ones being carved 10, J, Q, K and A symbols.

In terms of audio, the game has ambient jungle sounds in the background when the reels aren’t being spun, when they are spinning the pace picks up with a fast-paced drum beat.

The game is easy to grasp and there aren't too many confusing mechanics that’ll throw you off tilt. You can adjust the coin value, the amount of coins and lines you play across at the bottom of the screen and there are the options to bet max if you’re feeling lazy.

If we were to have one small complaint about the overall gameplay, it’s that it can be easy to miss the gamble button as it shares the same space as the ‘bet max’ button. So you can win and very quickly spin again without ever realising the opportunity to gamble was there.

Make no mistake, this slot is very volatile...  But with an RTP of 96% you’ll be pleasantly surprised with the wins you register whilst playing. As long as you’re careful and keep a tight control of your budget when you’re playing then you should get along with this game just fine.

This game is special in our eyes purely because it launched the Rich Wilde series, which is undoubtedly one of the most famous online slot franchises going. This game is well balanced, has some excellent bonus features and is easy enough to play. It gets a thumbs up from us.