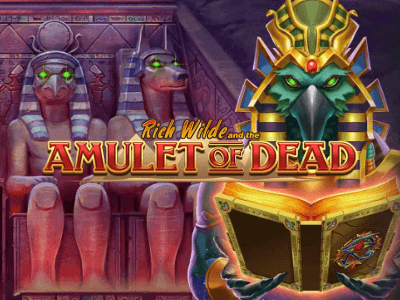 Rich Wilde and the Amulet of Dead

Rich Wilde and the Amulet of Dead is a 5-reel, 10 payline slot from Play'n GO that takes many of the elements from classic slot Book of Dead and puts a modern spin on things! Don't expect fireworks, as it does very much feel a reboot of Book of Dead, however, it does boast some genuinely gripping bonus features and mechanics such as a Thoth Multiplier, unlimited free spins and a gamble option.

“ The lack of creativity is a little uninspiring, but it's still a genuinely good slot! ”

Rich Wilde and the Amulet of Dead Features

If you know anything about the Rich Wilde series then you'll know they never disappoint when it comes to bonus features and mechanics. There are two major bonuses and one mechanic that kicks in whenever players register a winning spin.

Firstly we have the Froth Multiplier. Every single time players land a fully stacked Throth symbol on the reels it will activate one of three multipliers depending on how many symbols are on the reels at any given time.

The second feature we have is a classic free spins bonus. This is triggered if players land 3 or more scatter symbols anywhere on the reels. During the free spins bonus a random symbol is chosen to expand across the reels, so there's a great chance of triggering plenty of free spins

The number of free spins that can be re-triggered during this feature is unlimited! So there's truly no cap on how many free spins players can enjoy during this bonus!

Finally, we have the classic gamble feature that can be found in most Egyptian-themed slots! Players can choose to gamble their winnings on any base game spin in an attempt to either double or quadruple their money.

Beware though! If you lose the card game though all winnings that were made from the spin are forfeited.

Every time a fully stacked Thoth symbol lands on the reels it will activate one of three multipliers (2x, 3x and 5x), fully expanded Thoth symbols also act as wilds, so additional paylines will also be triggered leading to some healthy wins.

If players land 3 or more scatter symbols they'll trigger 10 free spins. The number of free spins that can be re-triggered during this feature is unlimited, so there's truly no cap on how many free spins players can enjoy during this bonus!

Players can gamble to double or quadruple their money by playing one of two simple card games after each and every base game win. Lose the game though and all winnings that were made from the spin are forfeited.

Rich Wilde and the Amulet of Dead

Rich Wilde and the Amulet of Dead is a 5-reel, 10 payline slot developed by Play'n GO that brings all eyes firmly back on the famed adventurer, who has recently taken a bit of a back seat in place of his daughter Cat Wilde, who has been stealing the spotlight when it comes to the Rich Wilde series in the last year or so.

This slot sees our daring hero return to the Pyramids and tombs of ancient Egypt in search of the Amulet of the Dead, once spinning the reels players can benefit from an all-new Thoth Multiplier which can see players activate a 2x, 3x or 5x multiplier! If this wasn't enough for you players can also trigger an unlimited number of free spins with special expanding symbols.

Truthfully, our first thought when opening this slot to play for the very first time was 'is this actually new?'... Rich Wilde and the Amulet of Dead looks and sounds very similar to that classic Egyptian-themed slot we all know and love, Rich Wilde and the Book of Dead. That being said, everything is certainly a lot more polished and there are a couple of new features that stand out, so we're not going to go out and say this is a complete clone.

We can't take anything away from the overall look and feel of the slot though, it's bright, vibrant and genuinely looks the part! Low paying symbols are your standard royals 10, J, Q, K and A whilst your high paying symbols are a bird, Anubis, Tutankhamun, Rich Wilde and Thoth (which substitutes for all symbols except a scatter). The Eye of Horus acts as the game's scatter symbol, triggering free spins.

In terms of the game's soundtrack, you've got your standard slightly menacing Egyptian-themed music that barely differs from older instalments in the Rich Wilde series (and in other Egyptian themed slots), again whilst it's more of what we've seen before, it's still pretty impressive on the whole.

This 2021 Rich Wilde slot plays exactly as you'd expect a standard 5-reel, 10 payline to, the only thing that players really need to keep an eye out for here is the Thoth symbol, this symbol takes up an entire reel and will usually form winning paylines, due to the fact that the entire reel acts as a wild for all three symbol positions. Depending on how many Thoth symbols land players will also trigger one of three multipliers.

In terms of navigating this title, nothing has changed from previous slots in the Rich Wilde series. Play'n GO have opted to retain the classic staking set-up of allowing players to change their coin value, coins and bet lines individually, which can lead to some confusion to those who aren't familiar with this way of staking... However, it does mean that players can place bets as low as 0.01, making this a penny slot!

Rich Wilde and the Amulet of Dead has a medium volatility, and is actually a little bit more forgiving than most slots in this series, which is refreshing. It boasts a decent RTP of 96.29% and a maximum total potential of 2,500x the player's initial stake, which isn't nessercerily the largest number, but it's enough to interest us!

On one hand we're impressed with this slot, it has some good bonus features and is very nice to look at! It ticks all the boxes for us... On the other hand, we've played Rich Wilde and the Book of Dead (and all the other Egyptian-themed slots) and we know there's absolutely nothing original about this game, which leaves a bit of a sour taste in our mouth.