Reel Rush is back with a brand-new recipe. Developed by NetEnt, Reel Rush 2 is the sequel that everyone wanted with more colour and madness than ever.

It takes the best parts of the original to upgrade the experience with Random Features and Super Free Spins. Don’t worry, there are still 3,125 ways to win with all the features.

Jump straight into the action and play Reel Rush 2 now at the following fully licenced UK slot sites. These slot sites have been thoroughly audited and reviewed by the team here at Slot Gods to ensure they offer an exceptional user experience, are trustworthy, safe, secure, and boast the best selection of online slots in their portfolio including Reel Rush 2...

Jump back into the playful world of Reel Rush. Just like the first game, there are no traditional paylines as Reel Rush 2 has a 5-reel cascading win system to open up your game even further. It features the same adorable symbols from Reel Rush that spin on the reels with all your favourite fruits.

Unlike its predecessor, Reel Rush 2 is chocked full of features. From the classics such as Re-Spins and Free Spins, to the thrilling new Random Features - there are so many cool ways to improve your gameplay.

Super Tokens are a new addition that are highlighted by the blue meter on the left. You fill this up by unlocking blocks, winning them randomly or buying them. Filling this up to 2,000 can get you additional features such as Super Free Spins with a progressive multiplier.

There are 8 Random Features that can pop up at any time. Second Chance allows reels to re-spin to give you a better chance at winning. Block Breaker unlocks 2 or 4 blocks expanding your reels to improve your odds.

Random Wilds sprinkle between 1 to 3 wilds onto the reels but cannot be placed on a locked block or the first reel. The Symbol Multiplier does exactly what is says on the tin and awards a multiplier to a symbol of either 5x, 10x, 15x or 20x. This works on all except the wild.

Random Features don’t just stop there. A Symbol Upgrade can change any symbol on the reel and improve it to the next highest symbol. You also have the option to receive an extra free spin, extra Super Tokens or a progressive Multiplier Boost that increases by 1 each time. 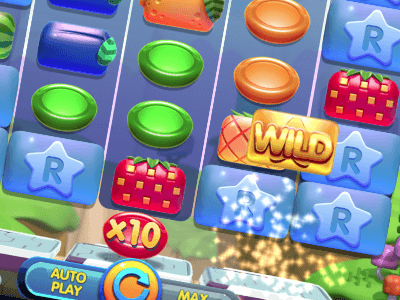 Appearing on reels 2, 3, 4 and 5 in the main game, Re-Spins, Free Spins and Super Free Spins - Wild Substitutions act as any symbol in the game to randomly help you. 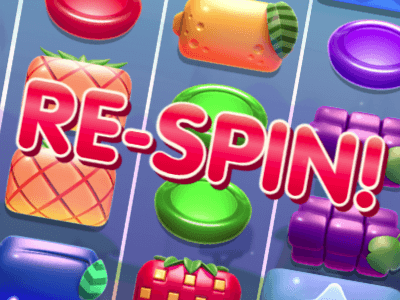 Back by popular demand, Re-Spin progressively opens up the reels to give you even more chances to win. After you reach the fifth Re-Spin, you have over 1,875 ways to win. 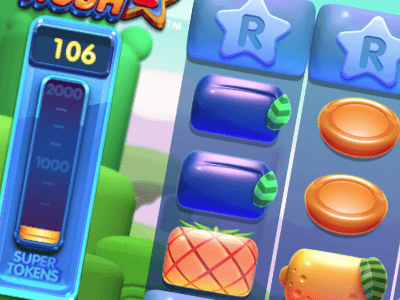 Each time a block is unlocked, between 1 to 5 tokens are collected in the Super Token meter. By reaching at least 2,000, you can win extra prizes. Super Tokens are in-game currency that can be bought or won. 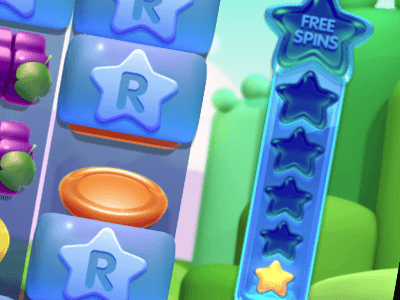 Just like Reel Rush, you have to fill certain criteria to reach Free Spins by filling up meters. You get the choice to start 8 free spins, gamble or buy Super Tokens for a chance to enter Super Free Spins. 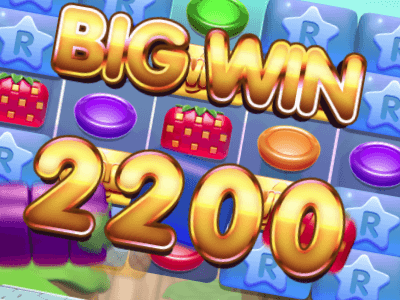 If the Super Token Meter is filled with 2,000 or more Super Tokens, you enter Super Free Spins. All wins are multiplied by the progressive multiplier and increases each time a win occurs. 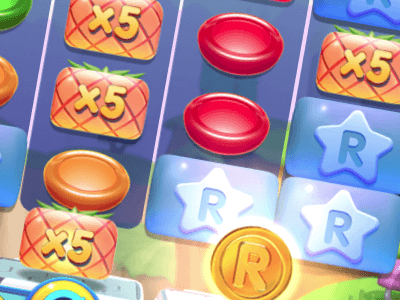 There are 8 Random Features that could activate at any moment to help your game. You could get a Second Chance to re-spin, unlock 2 or 4 blocks with Block Breaker or even receive 3 or 15 tokens with Extra Super Tokens.

Return back to the illustrious world of Reel Rush that continues its inspiration from 90s platforming games but with 3D graphics. Just like the first game Reel Rush, the sequel has 5-reels with a cluster mechanic and up to 3,125 ways to win with its features.

Developed by NetEnt, this food themed slot is full of charming artwork, melodious music and so many features that’ll keep you entertained. Reel Rush 2 is almost better in every way and it’s definitely one full of excitement.

Reel Rush 2 continues the cutesy aesthetic in the background with a green landscape with mushrooms scattered around. Instead of the 2D background, they’ve improved their graphics to feature 3D models. It can feel a little tacky at times compared to the art from the first game, but it still looks appealing nevertheless.

The inspiration from classic platforming video games is back, but with a new train cart system designed underneath the reels to highlight the Random Features system. It’s not too in your face, and makes it easy to understand the features a little more as you can literally see it coming.

Adorable fruit symbols are back with even more icons due to the Random Features system. They all look cute and fit in well with the style of the game.

Reel Rush 2 brings back the tranquil music, but a little more upbeat this time. Thankfully, it isn’t annoying and adds an upbeat feeling to the game. As you progress further and win more, it becomes even faster but still lines with the aesthetic. You’ll honestly be wanting to listen to the soundtrack even when you aren’t playing the game.

Forget the simple features of the first game, and say hello to a whole new range of exciting mechanics. You still set your bet and spin, but there are more features and random surprises that could drop and help your game. There is a little bit of strategy with the free spins mode as you can decide to accept the free spins, gamble or buy Super Tokens.

Super Tokens are essentially in-game currency that can be either won or bought, and allow you to receive bonuses such as Super Free Spins with a progressive multiplier. Aside from this, the game is relatively easy to follow despite there being a lot on screen at times.

The menus are straightforward and feature at the bottom of the screen. Information on the game and settings can be found here, along with the spin and autospin button. You can set bet levels and coin values here as well. Bets start lower compared to Reel Rush as they can be placed between 0.20 and 20.00 with the chance to set 1,000 autospins.

With the returning Re-Spin and free spin mechanics plus the addition of Random Features - there are a lot of possibilities to win in this game. Just using the 5 Re-Spin sections, there are up to 1,875 bet ways to win. After the extras and new mechanics, there are now 3,125 ways to score big. The maximum total win in this game is 25,000x your bet level.

Reel Rush 2 has a medium to high volatility which means that you may get payments less frequently but it could pay out more handsomely. The RTP is unfortunately lower than the first game as it is just below average at 95.53%.

It brings everything you loved from the first game and completely enhances them. Whilst the artwork may not be as charming as Reel Rush, Reel Rush 2 is bigger and better in every way. The retro aesthetic in the music and artwork is still there, but updated more with the extra features to match.

Reel Rush 2 is action-packed full of ways to enjoy your gameplay, whilst keeping within the aesthetic within the first game. It’s exactly what you want in a sequel as it brings all the favourites from the original and makes them even more fun.

Play Reel Rush 2 now at the following verified UK slots sites. These slot sites are fully licenced and have been thoroughly vetted and reviewed by us to ensure they offer a great user experience, are trustworthy, secure, and have a wide variety of the best online slots in their lobbies including Reel Rush 2:-

Enjoyed Reel Rush 2? Here's a handful of similar slots we think you'll like too. These online slots have been chosen based on features and themes similar to Reel Rush 2. You might also want to check out other NetEnt slots.