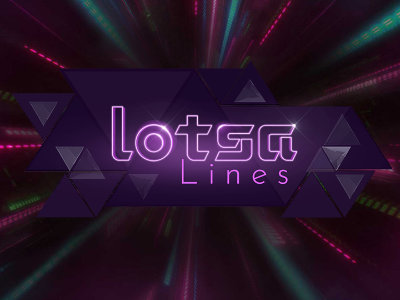 Lotsa Lines is a wonderfully designed 5-reel slot developed by Yggdrasil that's known for having an ever-changing number of paylines that can grow from 25 all the way to 500 in just a single spin! Lotsa Lines doesn't exactly reinvent the wheel, but it's still pretty unique and offers pretty everything we'd hope for from a high volatility slot such as wild re-spins and a generous number of free spins.

If one or more wild symbols appear on the game reels then a wild re-spin feature will automatically trigger. All symbols are held, and Wild Reels spin over the held symbols, wild reels contain only wilds and blank symbols.

If players land 3 or more scatter symbols anywhere on the reels then they'll automatically trigger the Lotsa Lines Free Games feature. This sees players receive 12 free spins. During the Lotsa Lines Free spins the number of paylines starts at 200 and can reach up to 300, 400 or even 500.

If one or more wild symbols appear during base gameplay then the wild re-spins feature will kick in. This sees all of the game symbols held whilst wild reels spin and more wilds are added to the reels.

Lotsa Lines, as the name suggests is an epic music-themed slot that features a lot of paylines... 500 to be exact! This unique Yggdrasil title sees the paylines change between 25, 50, 100 and 200 during base gameplay and up to 500 during the bonus rounds! If you're after high volatility gameplay with a high-octane soundtrack something a little bit different about it then look no further, Lotsa Lines will do the job.

This futuristic slot looks and sounds brilliant, however, we genuinely found it difficult to categorise Lotsa Lines, is it a music-themed slot? Is it a space-themed slot? Maybe, just maybe it's a retro-themed slot! It was a tough call, but after much deliberation, we opted for music, because that's certainly the most striking element of this slot, a whole setlist of high-tempo techno music plays as the reels spin, and we LOVED it.

In terms of visuals, this slot is all about equalisers and surges of electricity that occur every time the slot moves up or down a payline level. Low paying symbols are your standard 9, 10, J, Q, K, A whilst high paying symbols are confusing three-dimensional shapes that are a little bit trippy, to say the least! Special symbols include a cube-shaped scatter and a star wild.

Lotsa Lines also has stacked symbols that will run alongside ordinary symbols. These pile on top of each other in order to cover more spots on a single reel.

In terms of actually navigating the slot, everything can be found along the action bar at the bottom of the game reels. From left to right, players can their bet value of using - and + buttons, set the maximum stake, spin the reels, and set up to 1000 automated spins. On the far right-hand side of the action bar is a pop-out menu that features sound and game settings, the paytable and game rules.

This high volatility slot has an RTP of 96.01% which is the industry average. In terms of winning potential, the maximum players can scoop up is 3,499x their stake

Lotsa Lines is simple, and we like that. Sometimes new slots don't need to be all singing all dancing (however we were dancing along to the soundtrack of this well-designed Yggdrasil title). The bonus features are pretty good and we enjoyed the ever-changing nature of the paylines, however, it's nothing particularly new.

Play Lotsa Lines now at the following verified online slot sites. These slot sites have been thoroughly audited and reviewed by us to ensure they offer an exceptional user experience, are trustworthy, safe, secure, and boast the best variation of online slots in their portfolio including Lotsa Lines:-

Enjoyed Lotsa Lines? Here's a handful of similar slots we think you'll like too. These online slots have been chosen based on features and themes similar to Lotsa Lines. You might also want to check out other Yggdrasil slots.