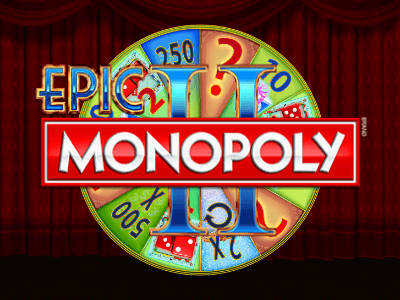 Epic Monopoly II is a wonderfully lavish 5-reel, 100 payline slot developed by industry veterans WMS that utilises the Colossal Reels engine, meaning the game is played across two separate sets of reels, one of which is an incredible 12 rows high! If you like bonus features you're in for a treat as this Monopoly slot features the Epic Wheel Bonus feature, Epic Free Spins, Epic Chance Bonus and the Around the Board Bonus!

“ Double the reels, double the fun! We rate this Monopoly-themed slot ”

Players can access a number of highly lucrative bonus features by way of the Epic Wheel Bonus, a wheel of fortune mini-game that's triggered by landing scatter symbols during base gameplay.

If players land 3 scatter symbols across any of the two sets of reels then they'll trigger the Epic Wheel Bonus, however landing more scatter symbols can lead to some even bigger bonuses, these are as follows:

Upon starting the Epic Wheel Bonus players will spin a wheel-of-fortune and will receive any of the following prizes:

Players must pick from 5 cards in a pick-and-click mini-game. They can win any of the following prizes:

If players trigger free spins by way of the Epic Wheel Bonus or the Epic Chance Bonus they'll receive between 7 and 20 free spins. During this feature all wild symbols stack on the main reel, they'll also transfer over to the colossal reel.

Around the Board Bonus

The Around the Board Bonus feature, as you'd expect, is a lucrative feature that sees players throw dice and make their way around a classic Monopoly Board. Depending on where players land then they'll win different prizes including multipliers and cash prizes.

Players can potentially trigger the Epic Chance Bonus by way of the Epic Wheel Bonus. This sees players tasked with picking random chance cards from a selection of 5 in a pick-and-click mini-game.

If players trigger free spins by way of the Epic Wheel Bonus or the Epic Chance Bonus they'll receive between 7 and 20 free spins. During this feature all wild symbols stack on the main reel, they'll also transfer over to the colossal reel.

The Around the Board Bonus feature is a lucrative feature that sees players make their way around a classic Monopoly Board. Depending on where players land then they'll win different prizes including multipliers and cash prizes.

Developed by industry veterans WMS, Epic Monopoly II is a sequel to one of the most iconic branded slots of all time, the now-retired Epic Monopoly. This wonderfully lavish 5-reel, 100 payline title utilises the Colossal Reels engine. which sees a huge 5-reel, 12 row set of reels to the right of the main ones.

If the unique setup wasn't quite enough to draw you in, then perhaps the fact this game boasts 4 lucrative bonus features will! Players can benefit from the Epic Wheel Bonus feature, Epic Free Spins, Epic Chance Bonus and the truly exhilarating Around the Board bonus feature!

This slot is exactly what you'd expect from a classic game in the Monopoly slot series, everything about this slot is classy and decadent!  The reels and action bar are adorned with gold trim, whilst the symbols are all related to the game of Monopoly and wealth.

Low paying symbols are all your traditional Monopoly game pieces, a boot, a top hat, a boat and a luxury motor car. High paying symbols include a bag stuffed with money, a pile of gold coins, a gentleman in a golden suit and a beautiful woman.

There are two expanding symbols, these feature a dog with a wad of cash in his mouth and the world-renowned Mr Monopoly himself! The scatter symbol is a Monopoly board and the wild is the phrase 'EPIC WILD'.

In terms of music, this game features a charming upbeat tune that fits the aesthetic of the game perfectly!

As mentioned, this game is played across two completely separate reels, a 5 reel, 4-row main reel on the left and a much larger 5-reel, 12-row slot on the right-hand side. Paylines do not extend between reels, instead, separate wins are recorded on both reels. The only symbol that can land on both reels and lead to wins is the scatter symbol.

In terms of navigating and simply playing the slot, it's a little bit frustrating as the stake selection button is hidden behind an extended menu on the left-hand side of the reels. The only visible button on the main game screen is the large spin button. The biggest shock to the system when testing Epic Monopoly II is the lack of an autospin button! It's never an issue we've come across before, but boy did we realise just how much we relied on it until it wasn't there!

This medium volatility gaming-themed slot has a decent RTP of 91.01%, which is right on the cusp of what we'd expect from a good online slot game in this day and age. In terms of winning potential, wins in Epic Monopoly II are limited to £250,000.00, which is pretty impressive.

We genuinely enjoyed playing Epic Monopoly II, it has all the hallmarks of a classic slot that's a little bit out there in terms of overall gameplay. We're all about the additional reels as it opened up the ability to win across many more paylines than you'd find in a standard slot, and that's always good with us! Of course, this slot boasts some pretty fantastic bonus features as well!

Play Epic Monopoly II now at the following verified online slot sites. These slot sites have been thoroughly audited and reviewed by us to ensure they offer an exceptional user experience, are trustworthy, safe, secure, and boast the best variation of online slots in their portfolio including Epic Monopoly II:-

Enjoyed Epic Monopoly II? Here's a handful of similar slots we think you'll like too. These online slots have been chosen based on features and themes similar to Epic Monopoly II. You might also want to check out other WMS slots.